Appearances can be deceiving, even in dogs. One of the best examples of this is the Wirehaired Pointing Griffon.

With the shaggy fur around its face and eyes and an overall unkempt appearance, this breed might fool you into thinking it’s not smart and it’s not paying attention to what’s going on around it.

In reality, the Wirehaired Pointing Griffon (WPG) is a dog that was bred to be a hunter. It is eager to please and misses very little as it surveys its surroundings. It’s constantly on the lookout prey that it can track and chase.

These are the 11 things you need to know about the Wirehaired Pointing Griffon before you consider welcoming one into your home.

The Wirehaired Pointing Griffon is a uniquely talented hunting dog.

The WPG was created to be a hunting dog. It’s routinely called a supreme gundog, which is a dog that is bred to assist hunters in catching game. This breed originated in Europe where breeders had an obsession with creating a dog that was willing to catch everything and anything, including game, birds, and waterfowl. The supreme gundog the WPG fits that bill. 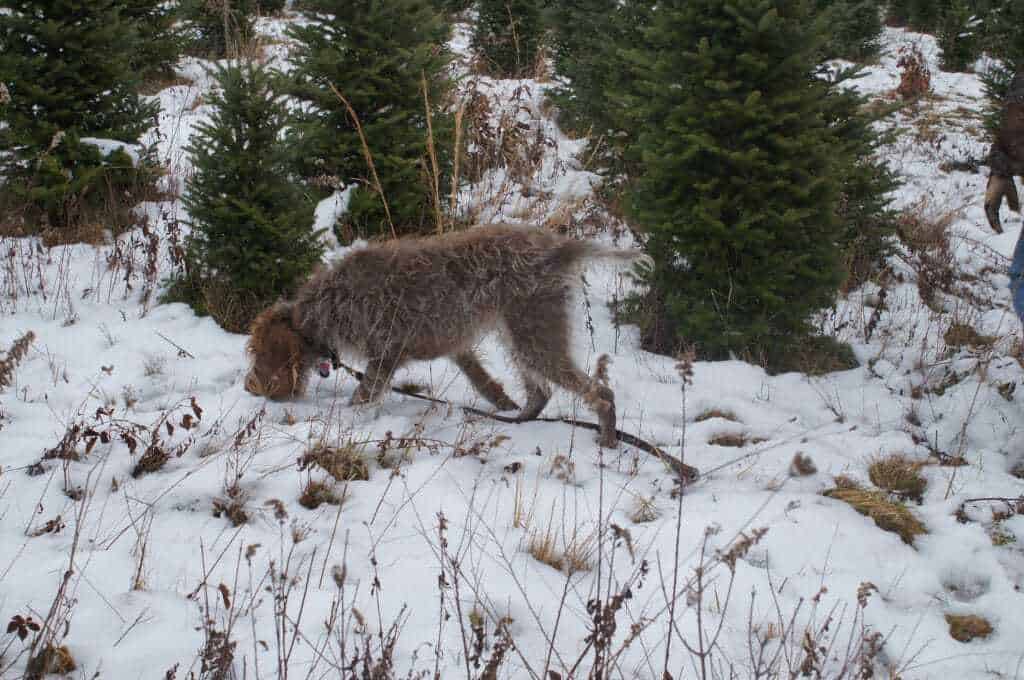 Dewey will track anything, anywhere, even through the snow. His coloring even helps him to blend in a little with the sticks and grass.

They are specifically designed to be good hunters.

The person credited with breeding the modern day version of the Wirehaired Pointing Griffon is Eduard Korthals. He did a lot of cross-breeding experiments in his attempt to create a dog that excelled at pointing and hunting on dry land but was just as good at catching waterfowl. The final version of the WPG fit that bill. It even has webbed toes to make swimming and catching those waterfowl that much easier. Korthals did his work with the breed in Germany and France. To this day, Europeans call the dog “Korthals Griffon,” although no one can agree on whether the breed is officially Dutch or French. 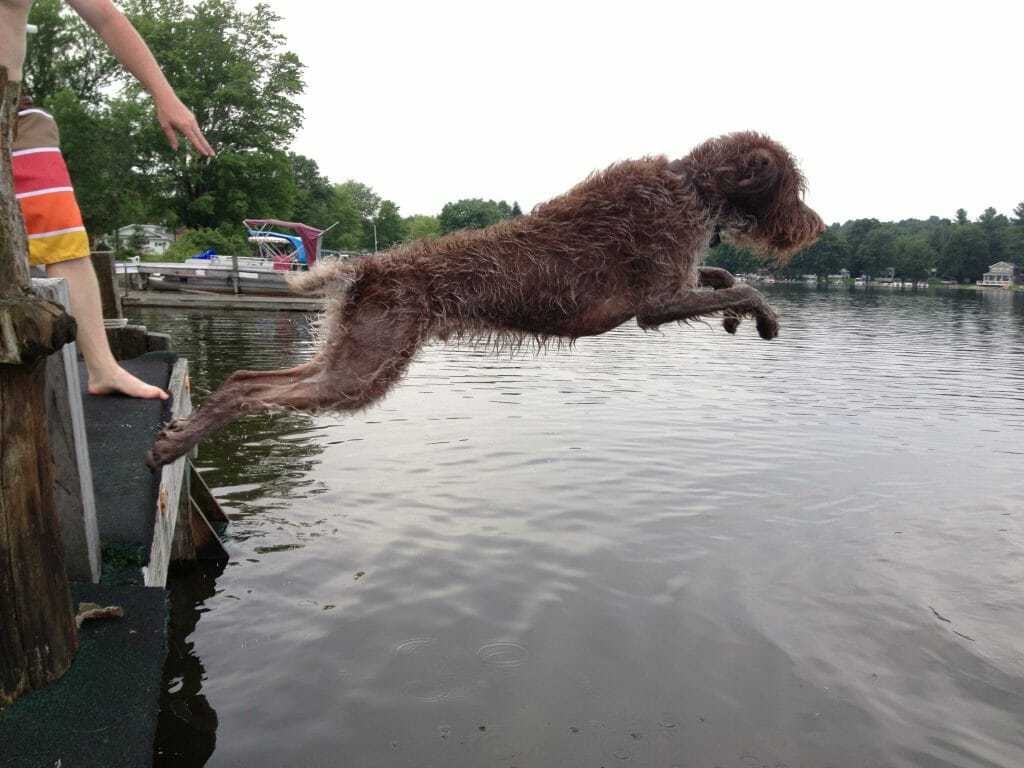 Dewey loves the water and jumps in any chance he gets. He’s not retrieving waterfowl, but he does love to chase his ball.

The coats of the Wirehaired Pointing Griffon also help with hunting in the elements.

This dog breed has a double coat. That means that the top coat and the undercoat are distinctly different, but they work together for the best interests of the dog. The harsh, wiry outer coat protects against the elements while the dog is outside, and even helps protect it from the water. The soft undercoat gives it a little bit of extra insulation to keep it warmer during those cold hunts outdoors. Wirehaired Pointing Griffons are seasonal shedders that need a good weekly brushing to clean up their coats. 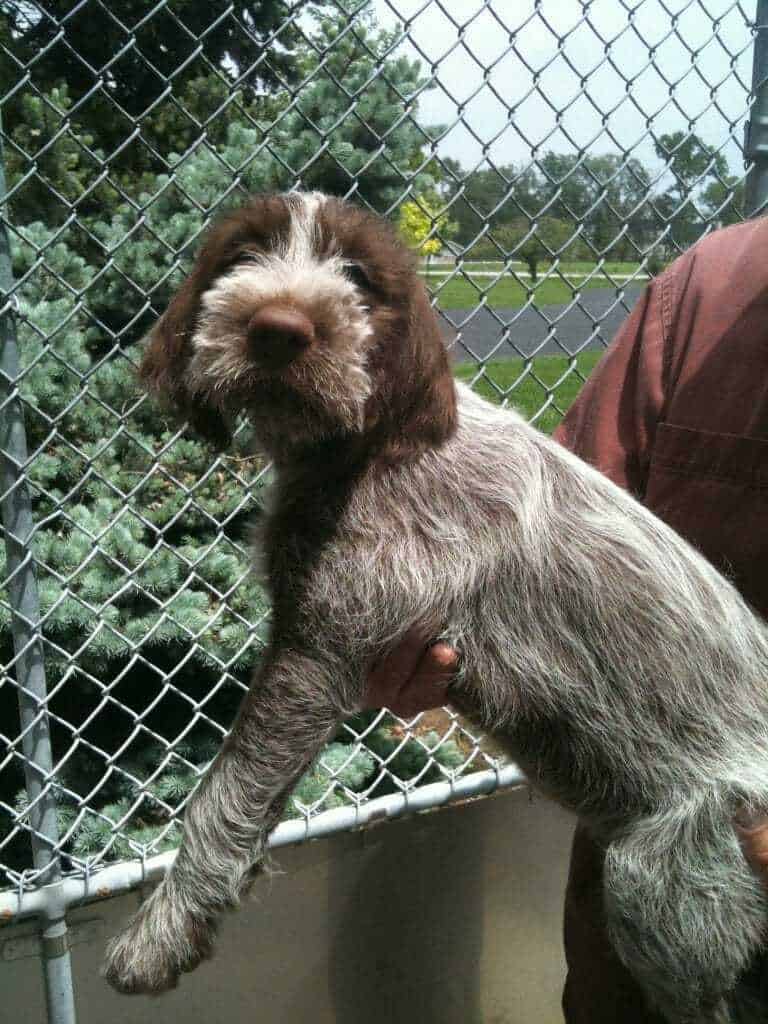 Here is a good example of the WPG’s coat. The grey part is wiry and designed to help the dog glide through the water.

The Wirehaired Pointing Griffon has a really unique coloring.

Something else unique about their coats is the coloring. Most are a unique combination of brown and grey. Their bodies are usually mostly grey, but their eyebrows, their mustaches, and their heads are often a deep shade of brown. Their eyes are either yellow or a brown similar to the brown in their fur. 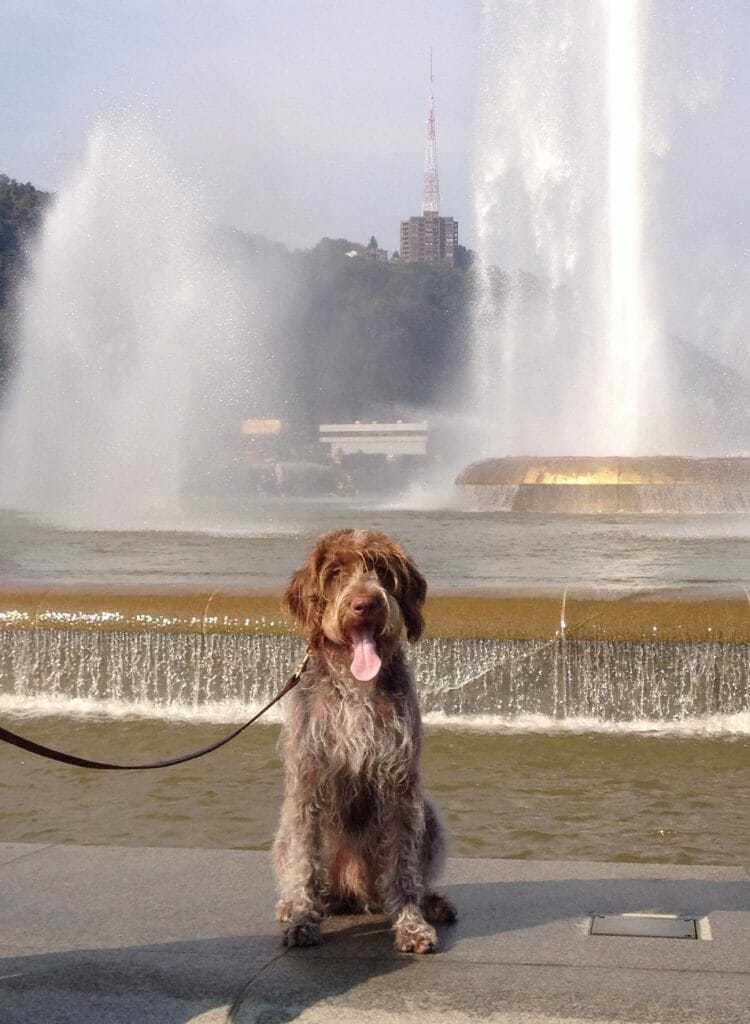 It’s easy to see Dewey’s coloring in this picture. He is the embodiment of the preferred coloring in a WPG. His body is mostly grey, but the fur around his ears and eyes and his mustache are all brown.

They are generally very healthy dogs.

When you adopt a Wirehaired Pointing Griffon, you’re getting a dog that doesn’t come with a lot of inherited health issues. However, there are some evaluations that the breed’s official club has recommended that all puppies undergo. They include eye, hip, and elbow evaluations. If you adopt a purebred puppy of this breed, you’ll pay anywhere from $1,000-$1,900, so making sure that the puppy is free from those particular problems is a must.

They’ve been around since ancient times.

The first writings that exist that specifically reference this breed in an earlier form are from 500 B.C. However, as we’ve detailed, the breed has come a long way in its development since then. It was formally received into the American Kennel Club in 1887, and it was the 38th dog to make it into the club.

They live to please their owners.

This is a dog that wants to work for its owner. It wants to chase the game and bring it back. It thrives on the praise of its owner when it delivers. Wirehaired Pointing Griffons are not the easiest dogs to train despite this desire to please, however. You’ll need to start while they are young and be positive, diligent, and consistent in your training. If you take advantage of your dog’s desire to please you, you’ll find that with time and hard work, your dog can become very well-trained.

They are great with dogs and kids.

This is a breed that is happy to play with kids and other dogs. They are very attached to their people and love to be with them. You’ll need to be careful around cats or other small animals as the dogs may not be able to keep their hunting instincts from taking over. 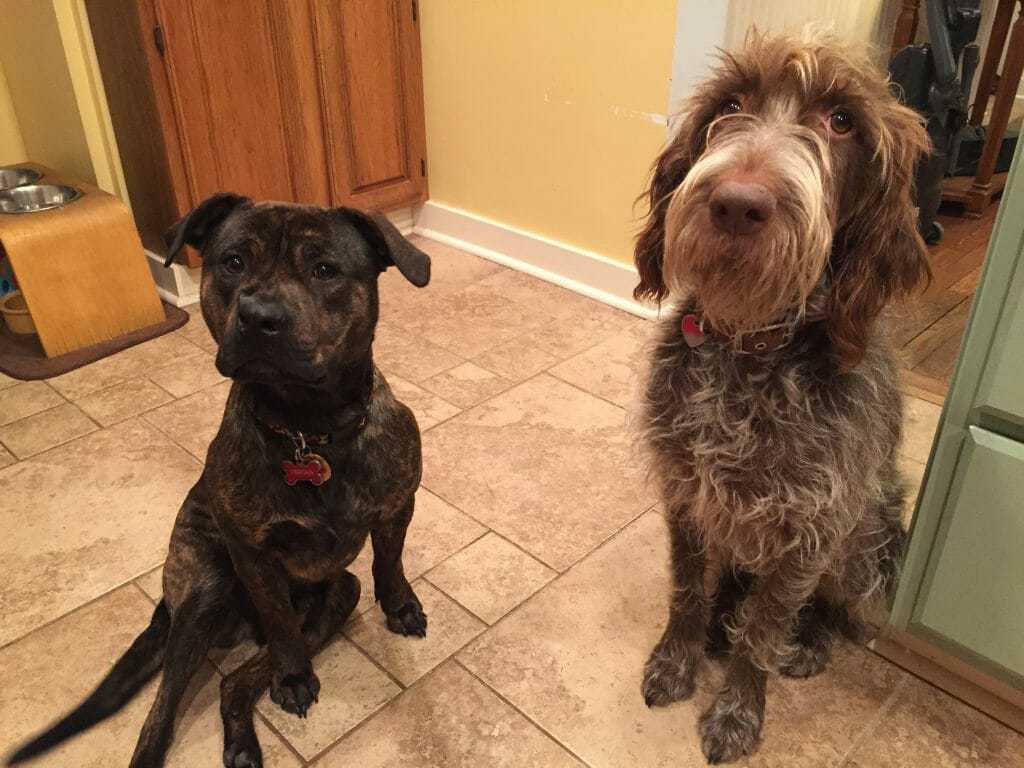 Dewey is pictured with his best friend Fergus. While they get along great, the same cannot be said about the chickens that the family owns. Dewey can no longer be in the yard at the same time that the chickens are out because he kept hunting them.

According to the AKC, this breed needs attention, time, patience, and training. Lots of it. Their desire to chase and hunt and swim and track will come out often, and without that commitment by their owners to giving them the exercise they crave, WPGs may become bored and unhappy, and they might decide to take their frustration out by chewing or destroying things around your home. This is a breed that needs long walks, lots of runs, and would benefit from a fenced-in yard to get even more exercise.

VIDEO DESCRIPTION: Dewey is playing outside and has much more interest in checking out the chickens in the pen than he does chasing anything else in the yard. He does play a little with his brother at the end of the video, which helps him get his energy out.

Prince Rainier III was married to the American actress Grace Kelly. While she was a fan of Weimaraners, he owned a Wirehaired Pointing Griffon. He was faithful to the breed and they were loyal back to him. His last dog, Odin, followed his casket in the public funeral procession.

The Wirehaired Pointing Griffon needs an owner that will give it the attention and physical exercise it requires. If you can take that on, you will find a great canine partner who will be loyal and faithful to you for years to come.