Chances are if you’ve seen a Borzoi, you’ve likely thought that it was just a Greyhound with long hair.

The reality is that the Borzoi is an entirely distinct breed all its own, a mix of Arabian Greyhounds and a thick-coated Russian breed of dog. While it’s got some features that resemble Greyhounds for sure, it’s definitely larger than the familiar racing dogs.

Here are 12 things you should know about the majestic Borzoi breed if you’re considering making one part of your family.

The Borzoi is Russian royalty.

Believed to be descendants of the coursing hounds of the Tartars, Russian bearhounds and the Russian Sheepdogs the Owtcher, the Borzoi has a storied history. In the late 1800s, Borzois were a thriving part of Russian aristocracy. They were a cherished breed owned by many Russian nobles and royals, as well as author Leo Tolstoy. They were bred for hundreds of years to hunt wolves, and their owners organized weekend hunting festivals to watch these regal dogs hunt all kinds of game, although their favorite was wolves. Tolstoy memorialized one of these festivals in his famous book “War and Peace.” 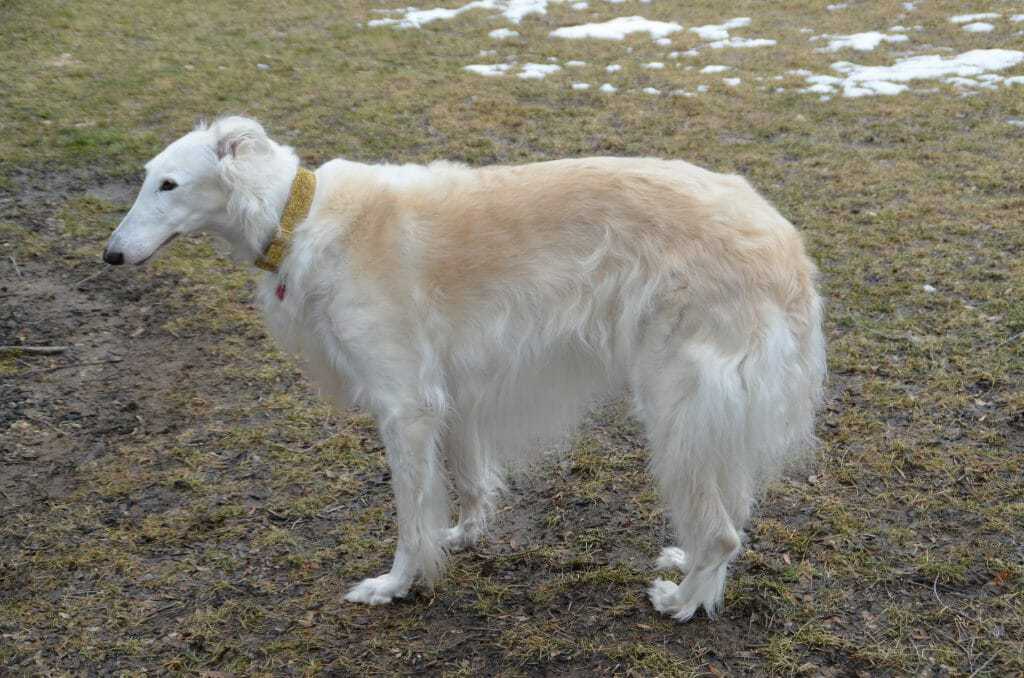 This is a full-body shot of the Borzoi. You can see the resemblance to a Greyhound in their faces and in their body shape. Long hair is characteristic of the breed too.

The Borzoi is really fast.

Like their Greyhound ancestors, this is a fast dog. In fact, it’s the seventh fastest dog in the world and can run at speeds topping 40 miles per hour, which means it lives up to its name. “Borzoi” actually means “swift” in Russian, although when they first came to America, the breed was known as the “Russian Wolfhound.” It didn’t change to Borzoi until 1936.

The Borzoi was bred to hunt and loves to chase.

As we mentioned, this is a breed that was raised to hunt all kinds of game, and it loves the thrill of the chase. They are “sighthounds” so they will chase anything that they see. If you own one, you should never let it off a leash. Because of their speed and their desire to chase…well, anything, there’s a good chance you won’t be able to catch it if it escapes.

The Borzoi was lucky to make it out of Russia.

The fact that this breed still exists today is somewhat miraculous. During the Russian Revolution in 1917 when the royalty and all of their nobles were killed, so too were most of the Borzois that the upper class loved so much. They may have become completely extinct except for the fact that visitors to Russia had also fallen in love with the dog and had started importing it to their home countries. The first one arrived in America in 1889. 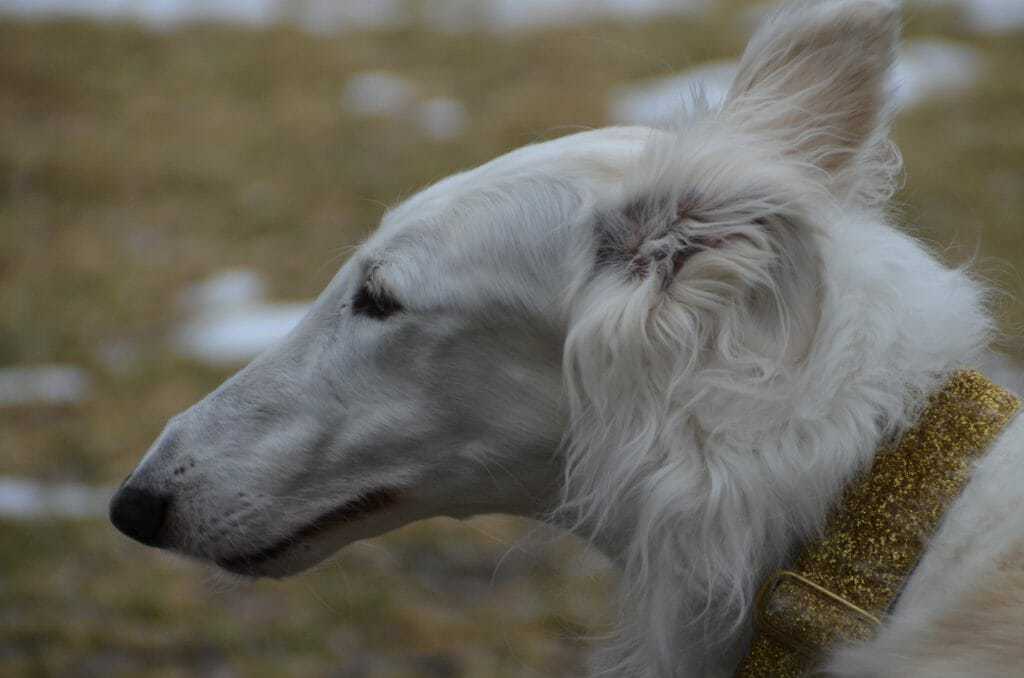 Americans and others became very fond of the breed after seeing them in hunting festivals in the late 1800s. They began importing the dog to other countries around that same time, which is when they also arrived in America. The first Russian Wolfhound, as they were known then, arrived in Pennsylvania from England in 1889.

This breed need lots of exercise.

Precisely because you can’t let them off leash, you’ll need to plan for daily long walks to get this dog’s energy out. This breed would also thrive with a secure, fenced-in yard, and would respond well to agility training exercises. But don’t just leave them outside alone in the yard. This is a breed that wants to be around its family so let it run around outside, and then bring it back in to take a nap when it’s done.

The Borzoi is a gentle and affectionate breed that is content to hang out with kids. It’s not much of a barker, and while it does need exercise, it’s also quite content to take long naps, making it a great dog for apartment living. You’ll want to be careful with the dog around small children though since it doesn’t really grasp its own size and may unintentionally knock down little kids in the midst of play.

The Borzoi is smart – but really stubborn.

Smart and stubborn can be a tricky combination in a dog, and the Borzoi is no exception. Even though the dog is mild-mannered and gentle, its stubbornness can make training difficult. However training is possible with lots of patience and diligence. Be prepared with treats and perseverance to motivate this dog to learn preferred behaviors.

Bella is 10 years old, which is old for a Borzoi. She has been very well trained by her owner, to whom she is very attached. She is actually the opposite of most members of her breed, and is allowed brief times off of a leash because of her advanced age and because she is so well-trained.

Because this breed benefits so much from training at a young age, you might want to look for breeders. But be prepared to pay. Like most purebred dogs, Borzoi puppies are expensive. The average cost is around $1,300, but that will pay off when you see just how much a puppy can learn when you are willing to work with it.

Beneath their beautiful long coat is a very large dog. To qualify for AKC competition, males must be at least 28 inches tall and females at least 26 inches. Males usually weigh between 75-105 pounds, while their female counterparts are typically a little smaller, weighing in between 60-85 pounds. 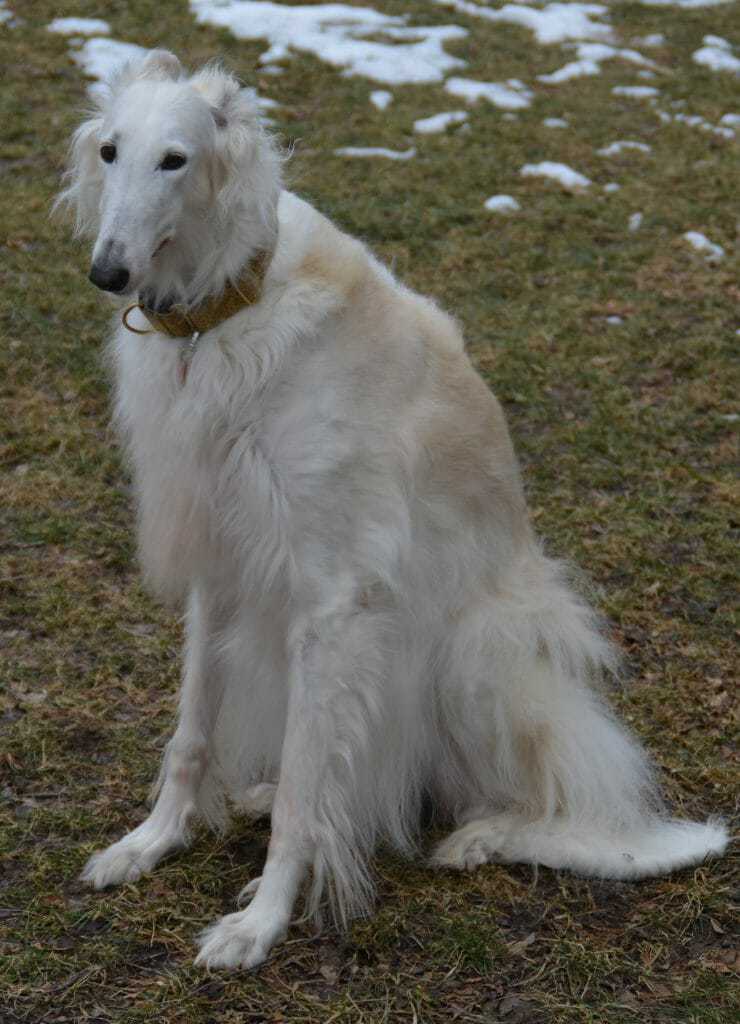 Even though she is sitting, you can see how long Bella’s legs are and how tall she is. She is right around 70 pounds, so she is average size for a female of this breed.

Like other large breed dogs, bloat is one of their potential health issues.

Bloat occurs when a dog’s stomach twists around and then fills with air. There is no one definitive cause of bloat, but researchers have noted that it often happens in large dogs that tend to eat and drink a lot, and then exercise intensely right after eating. It most often happens in larger, male dogs. However, any dog is ultimately susceptible to bloat so you’ll need to keep an eye out for it no matter what size or gender your dog is. In addition to bloat, other potential breed-related health issues include sensitivity to anesthesia, eye issues, and hip or elbow dysplasia.

You’ll need to invest in a good dog brush for the Borzoi.

Borzois are definitely shedders. Their long coats are gorgeous but do require some care. You won’t need to hire a professional groomer, but you will need to purchase a good dog quality dog brush and commit to a good, lengthy brushing at least once a week, and more during the high shedding seasons of fall and spring. 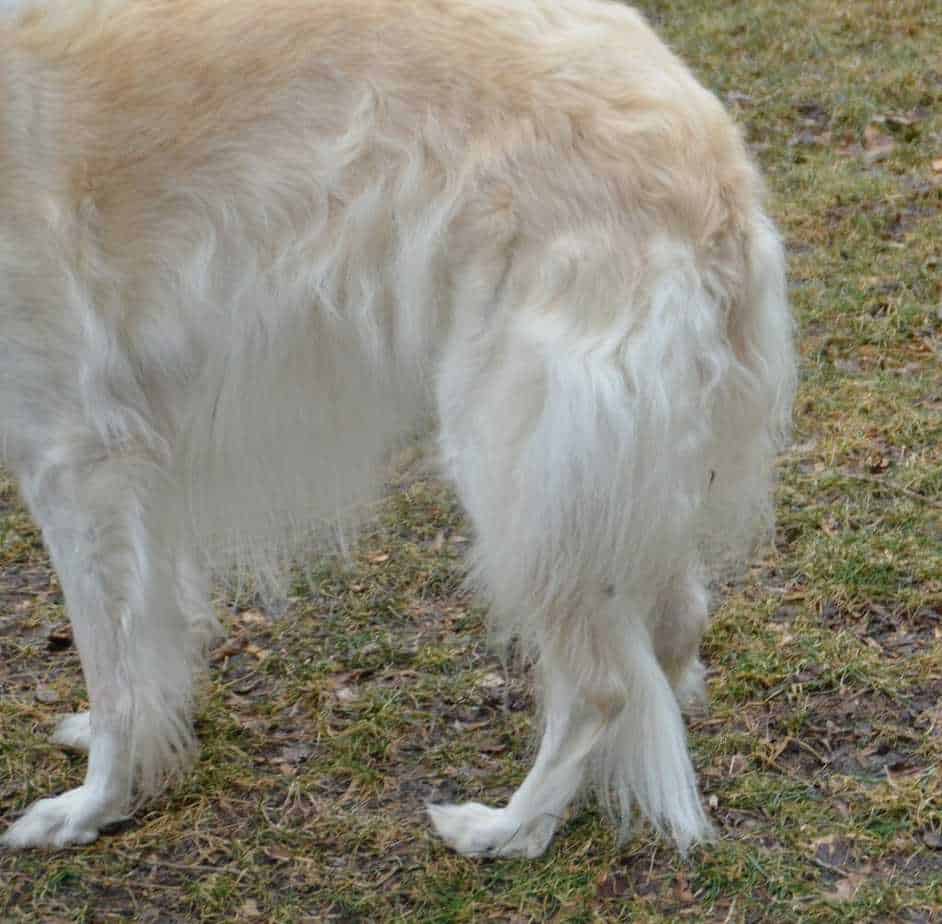 You can see a few pieces of ground debris – leaves and dirt – stuck in this dog’s fur. Her owner takes her outside several times a week to give her a thorough brushing and make sure that she doesn’t have knots, clumps, or things like these stuck in her fur.

If you’re looking for a watchdog, you may want to check out another breed.

Borzois tend to be laid back and don’t have much interest in watching what’s going on outside of their home. That doesn’t make them the best candidate to guard your house. They would be much more likely to happily greet an intruder than they would to bark and alert you to one.

The Borzoi is a regal dog with some high-maintenance needs. If you feel like you can handle those needs, however, the Borzoi will make a beautiful companion for you.