When Capa, my Labrador Retriever mix, sat in his chair with his head bobbing up and down uncontrollably, it freaked me out. My dog is healthy overall, and I wasn’t told about any health problems or chronic conditions when I adopted him.

Still, here he was with his head shaking as if he had developed Parkinson’s disease. His eyes were open, he didn’t seem distressed, and he looked at me and wagged his tail when I said his name. The head bobbing and tremors stopped after a couple of minutes.

I was worried so I did some research. Soon I came across a bunch of information on idiopathic head tremors in dogs.

What are idiopathic head tremors?

Idiopathic head tremors in dogs are characterized by a dog’s head bobbing up and down or shaking from side to side. The shaking isn’t violent and is sometimes so subtle you don’t see it at first. Episodes are short and in the middle of one, the dog is totally aware of what’s going on around him. Some dogs don’t even notice them.

The problem here is that there are tons of conditions that cause tremors in dogs. “Idiopathic” means that the cause of the tremors is unknown. So how can you tell if it’s an idiopathic head tremor or caused by something a specific condition? Well, the only way to find that out for sure is by visiting your dog’s veterinarian. Lab results, blood work, and any other tests will come back normal if your dog has this condition. 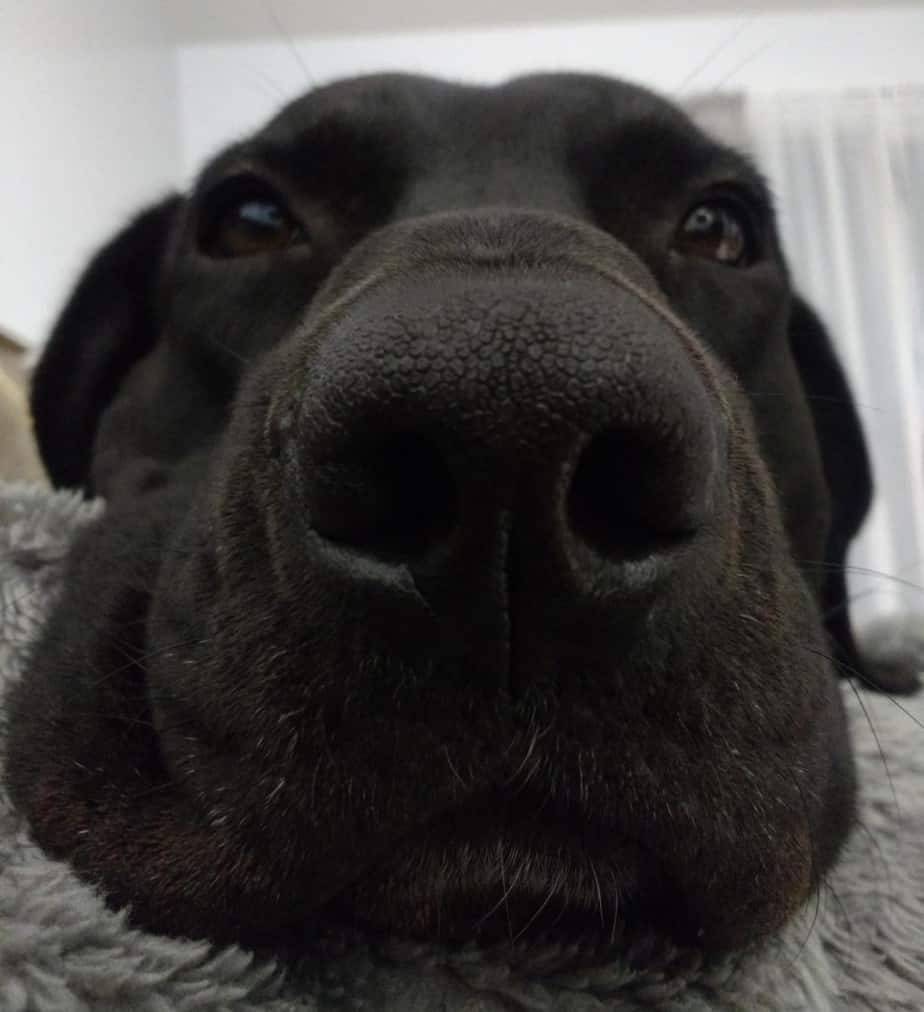 When your dog has new and unusual symptoms, it’s hard not to be afraid. Always get your dog tested if you’re concerned, so you know how to handle the situation. Photo is self-taken.

What are the symptoms?

Idiopathic head tremors can be easily confused with focal seizures and other health conditions. The main symptom to look for is a repeated nodding or shaking of the head. In fact, there shouldn’t be any other symptoms at all.

During an episode, your dog is completely alert and should respond when you talk to him. Episodes stop and start seemingly at random, but they don’t last more than five minutes or so. They’re unpredictable and their frequency depends on the individual dog. My dog can go months without having an episode, and then have two in a week. Some dogs have more than one in a single day. Others still might only have one in their entire life.

A video showing an English Bulldog having idiopathic head tremors. The person taking the video feeds him Greek yogurt as a distraction, which eventually helps to stop the tremors.

There are some symptoms that are NOT associated with idiopathic head tremors. It’s helpful to know what they are, both for your peace of mind and so you can report the problem to the vet.

If your dog has any of these symptoms, it’s a sign of a different condition and he should be seen by a veterinarian as soon as possible:

At this point, no one knows. Idiopathic head tremors happen when muscles in the head and neck contract involuntarily. There are many theories on what triggers an episode, but here are some of the more common ones: 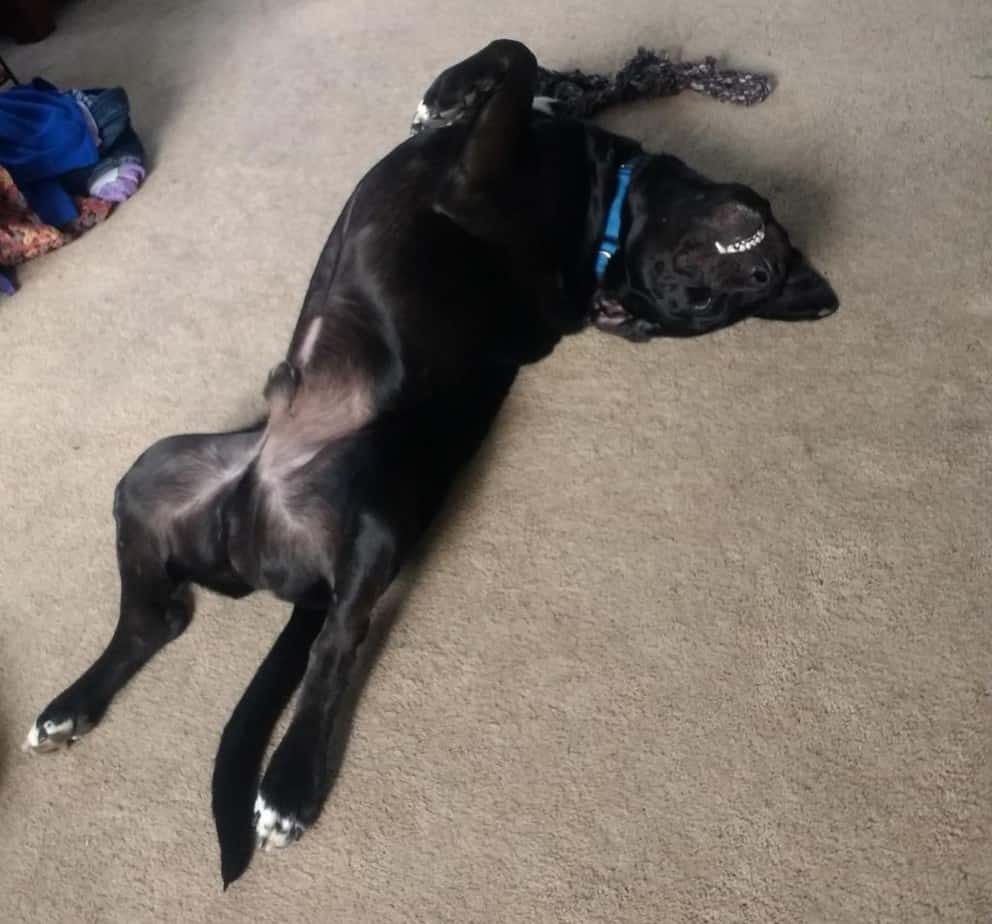 Too much excitement is one possible cause for head tremors in dogs. This is sometimes the case with Capa, especially when he greets us after work. Photo is self-taken.

The cause varies between dogs. Capa’s attacks coincide with a few different things. Sometimes it’s excitement about a walk. Other times, he’s lying down on his side holding his head up and looking at the ceiling. He holds the position for so long that after a while, his head starts to shake. It could be as simple as his neck muscles getting tired and that triggers an episode.

If you can, keep track of your dog’s episodes. Pay attention to what’s happening before they start, what your dog is doing, if there’s anything that might have overstimulated or exhausted him, or if he appeared stressed before the tremors started. Keep a log of the attacks and look back on it to check for any patterns.

Should I be worried?

The short answer is probably not. That said, if your dog is having head tremors, you should bring him to the vet just to be sure nothing is seriously wrong. Any tremors that continue to happen without known reason are considered idiopathic until a different diagnosis is found.

Idiopathic head tremors are usually diagnosed after all other potential problems have been ruled out. If everything looks normal in the tests and your dog isn’t experiencing any other symptoms or pain with the tremors, there’s no cause for immediate concern.

The tremors shouldn’t affect your dog’s appetite, energy level, or temperament at all, and the only time you’ll notice symptoms is during an episode. If your dog is otherwise healthy and acting normal, there’s no need to worry.

Which breeds are most affected?

Any dog can experience idiopathic head tremors, including mixed breeds. They’re more common in young or middle aged dogs but can show up at any time in a dog’s life. They affect male and female dogs equally. Some dogs are more prone to them, but no one has figured out why.

These breeds tend to be more susceptible to developing idiopathic head tremors: 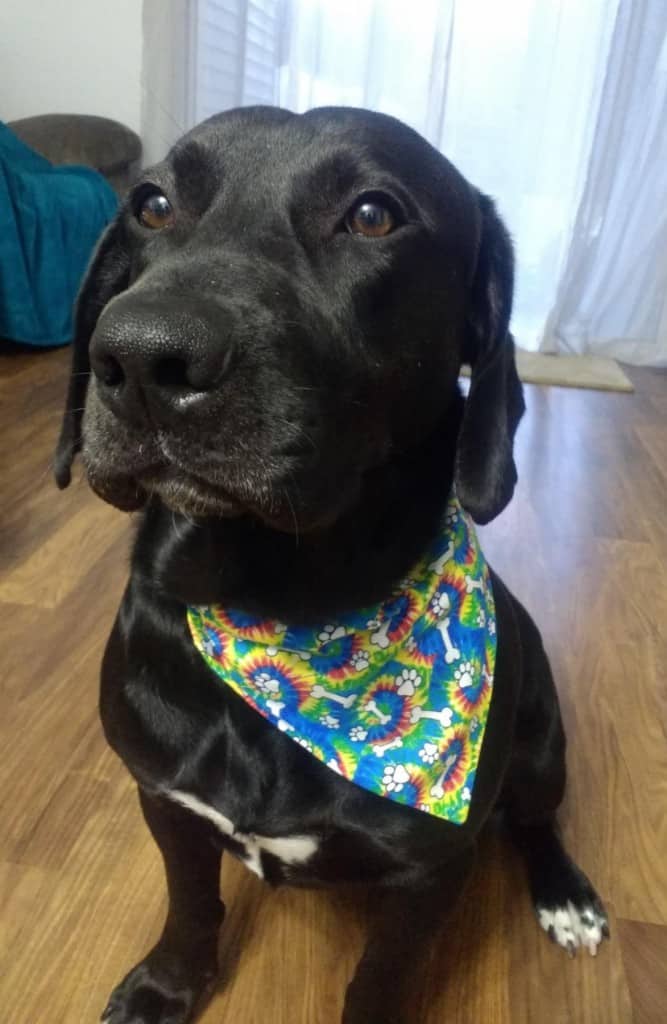 Capa is a Lab/Basset mix. Since he has at least one breed prone to idiopathic head tremors in his lineage, that increases his chances of getting them. Photo is self-taken.

Capa is a three-year-old Lab/Basset hound mix. I adopted him from a local shelter, and since then he’s had somewhere between 7 and 10 of these episodes. I don’t know his medical history from before I adopted him, but the tremors could have started anytime from when he was a few months old onward. For all I know, he may not have had them before I adopted him.

If a mixed breed dog’s lineage includes one of the aforementioned breeds, he’s still got a higher chance of having idiopathic head tremors. My dog probably has more than just Lab and Basset lineage, and he may be a mix of other breeds prone to the condition. There’s no way to know whether your dog will develop the tremors until they actually show up.

What to do during an episode

When you’re watching your pup’s head shake, of course you want to step in and make it stop. Even now, knowing that my dog’s tremors don’t hurt him, I get worried just because it’s unexpected and I don’t know what to do.

These tips can help you get through your dog’s episodes and hopefully keep you calm, too: 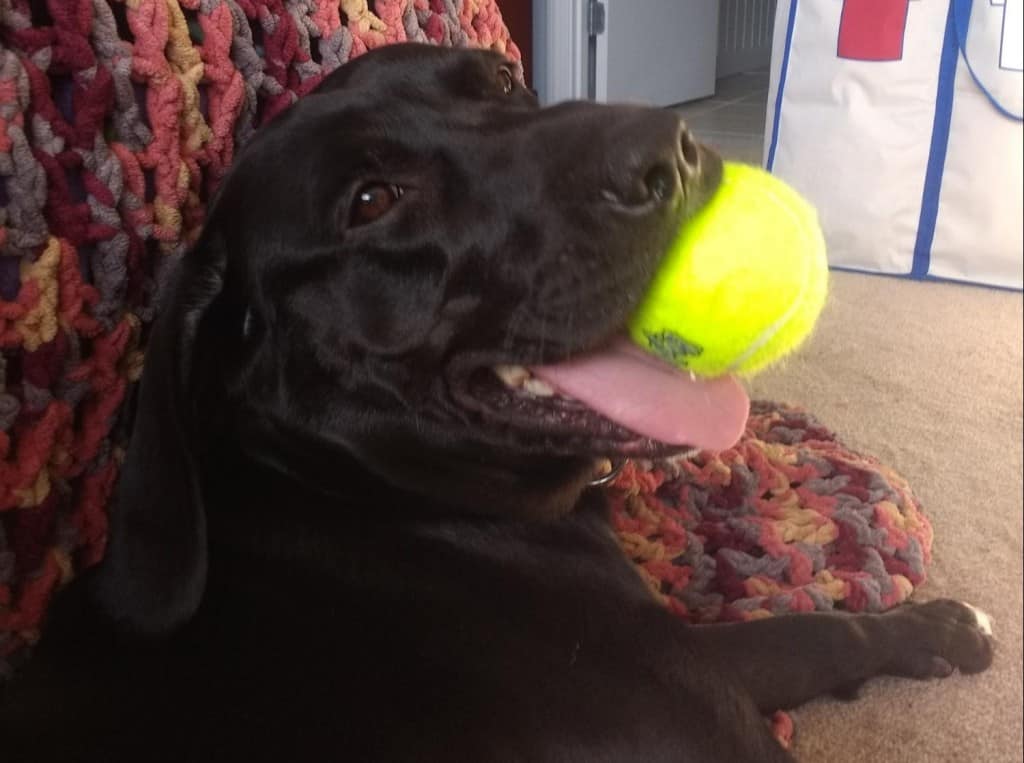 Distracting your dog with a toy can help stop the tremors. Capa’s favorites are squeaky tennis balls! Photo is self-taken.

How are they diagnosed?

Idiopathic head tremors are usually diagnosed once everything else has been ruled out. There are lots of conditions that can cause similar symptoms. A lot of the time, people mistake these tremors for different types of seizures, and there are plenty of other types of tremors caused by injury or illness.

A veterinarian can rule out any major issues with these tests:

If all of the tests come back with no problems, that’s when your veterinarian may consider idiopathic head tremors as the diagnosis and give you more information on what to do when your dog has an episode.

Are there treatments available?

Most of the time, idiopathic head tremors don’t require treatment. There are no drugs available to treat them specifically, as no single treatment can cover all potential causes. However, the tremors don’t respond to other medications, like anti-seizure treatments. Since there’s no way of knowing at this point what causes the tremors, it’s hard to know how to stop or prevent them.

The good thing is that the lack of treatment won’t cause your dog harm. The only form of “treatment” is to distract your pup with treats or tricks and to keep him calm during an episode. 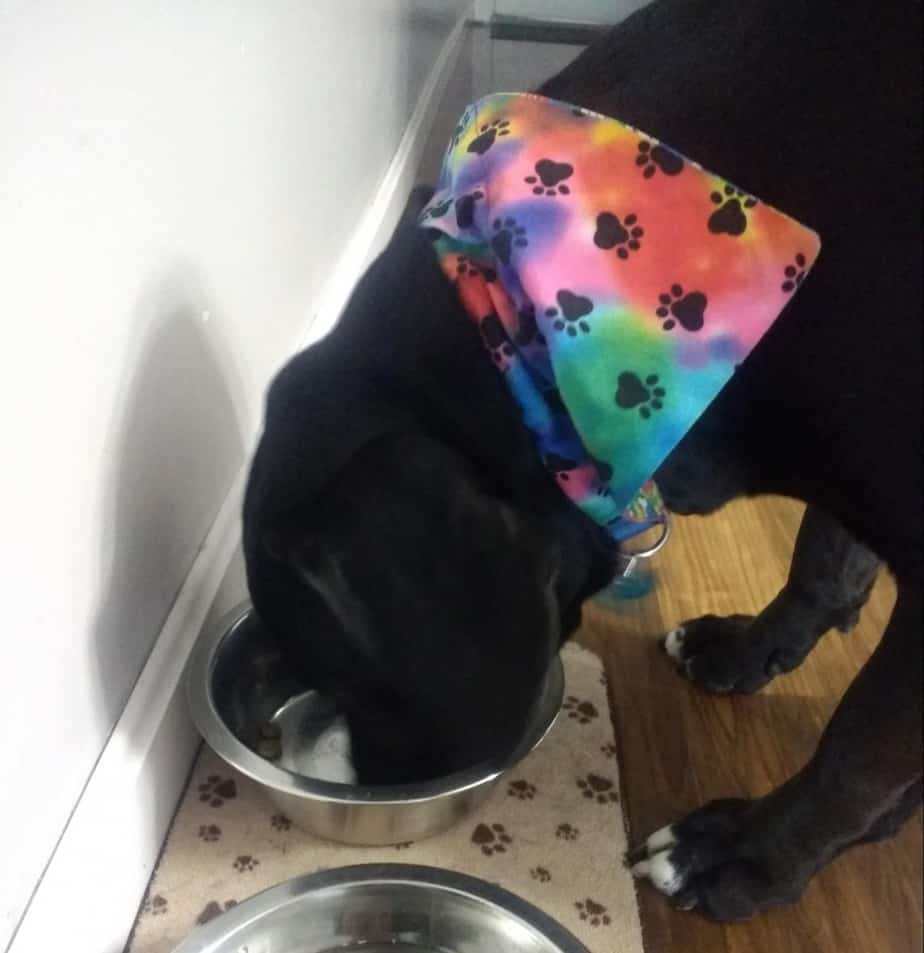 Your dog’s appetite shouldn’t be affected by idiopathic head tremors. Sometimes food or treats can help your dog snap out of an episode, so make sure you always have some on hand. Photo is self-taken.

Other types of head tremors

If you’re not sure what’s going on with your dog or if he’s just recently started having symptoms, it’s good to know how to recognize other types of tremors. Knowing what you’re looking at leads to a faster and more accurate diagnosis.

Here are some other types of head tremors that might look similar but can come with other symptoms:

Any of these disorders can potentially harm your dog, which sets them apart from idiopathic head tremors. They might include some of the symptoms listed earlier in this article and may manifest more consistently or dramatically. 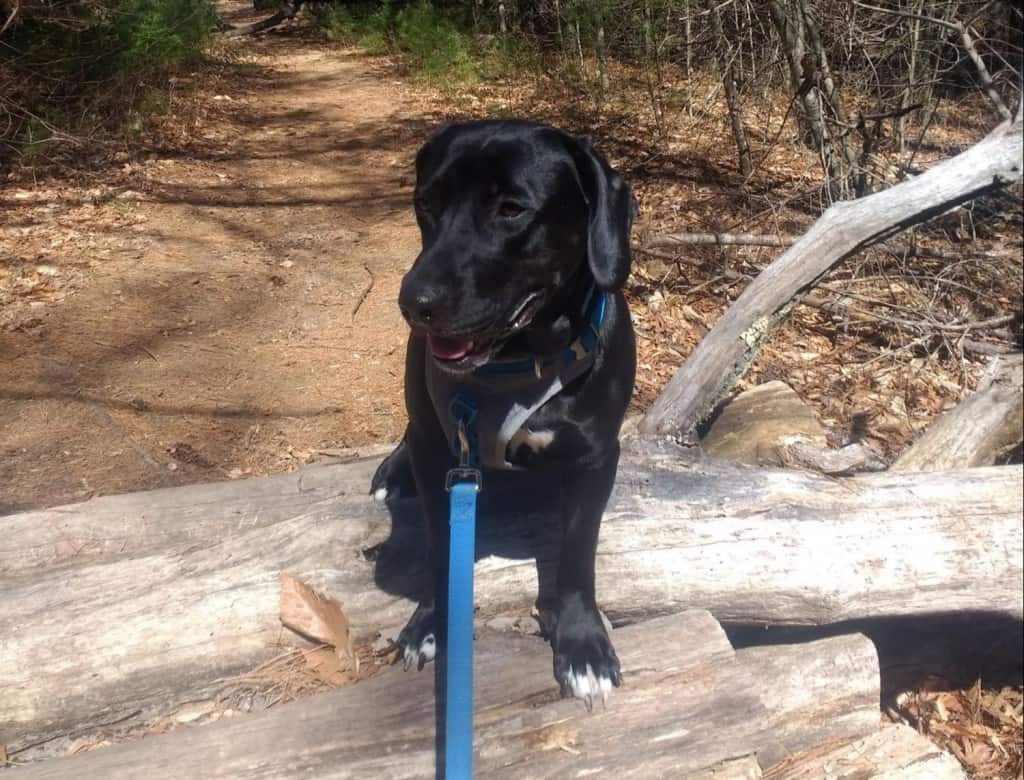 Take your pup for a nature walk as a distraction! Sometimes dogs (like Capa) get so excited at the sight of the leash alone that it will stop an episode. Plus all the smells along the trails will keep him occupied.

Your dog can still lead a happy and healthy life with idiopathic head tremors. They don’t cause or worsen other health problems or alter his quality of life in any way. You can still take him on long walks, he’ll still be happy to see you when you get home, and he’s still the same good boy he’s always been! 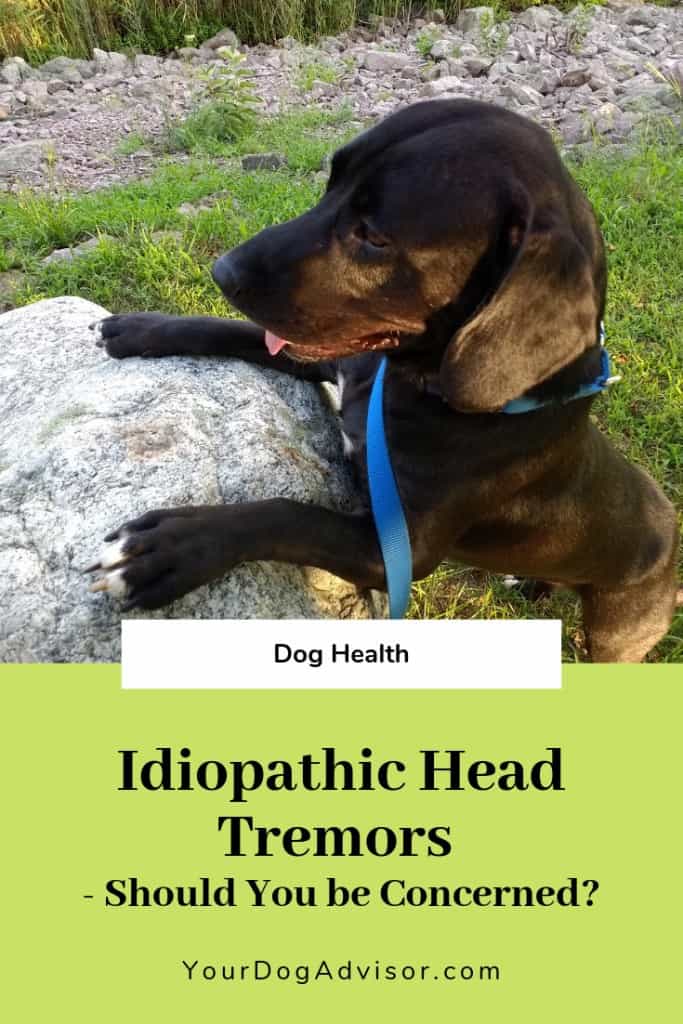