You’ve probably never heard the phrase “as American as apple pie” applied to a dog before. Maybe that’s because you’ve never met a Boston Terrier.

The Boston Terrier, an all-American dog, is instantly recognized by its unique black-and-white coat, the breed’s distinctive markings and large eyes. If you’re considering adopting one of this special breed, here are 14 things you need to know before you make your decision.

The Boston Terrier is the first breed completely developed in the United States, and are believed to be a cross between a Bulldog and a white English Terrier (which doesn’t exist anymore). All Boston Terriers are believed to have come from the same dog named “Judge.” Although they were called different things when they first came on the scene, the name Boston Terrier was formally attached to them in 1889. The AKC recognized them in 1893.

The Boston Terrier is often confused with the French Bulldog.

The two dogs look very much alike with one distinct difference: their ears. The ears of the French Bulldog are round, whereas the ears of the Boston Terrier are pointed. 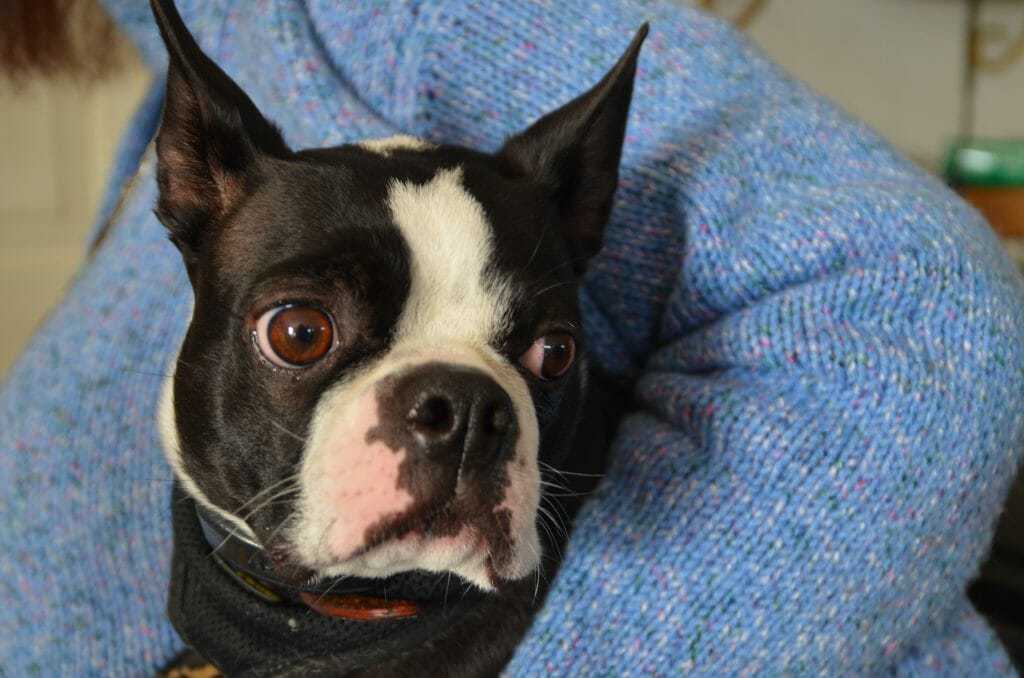 You can see how tall and pointed Casey’s ears are when they are standing on end. The points help to distinguish the breed from the French Bulldog, one with which it is easily confused.

The Boston Terrier breed has a very sweet nature.

If you are looking for a lap dog, you might have found your match. This is a dog that loves to cuddle and snuggle and take all of your attention. While he doesn’t mind being in a crate occasionally, he really craves the presence of his person and wants to be together with his human as much as possible.

The size of the Boston Terrier makes it easy to cuddle.

Boston Terriers are definitely in the category of small dogs. They measure 15-17 inches in height and weigh less than 25 pounds. Like all small dogs, the Boston Terrier can be prone to becoming overweight fairly easily, so you’ll need to make sure that you limit the treats and feed him good quality food. The life expectancy of the Boston Terrier is 10-14 years. 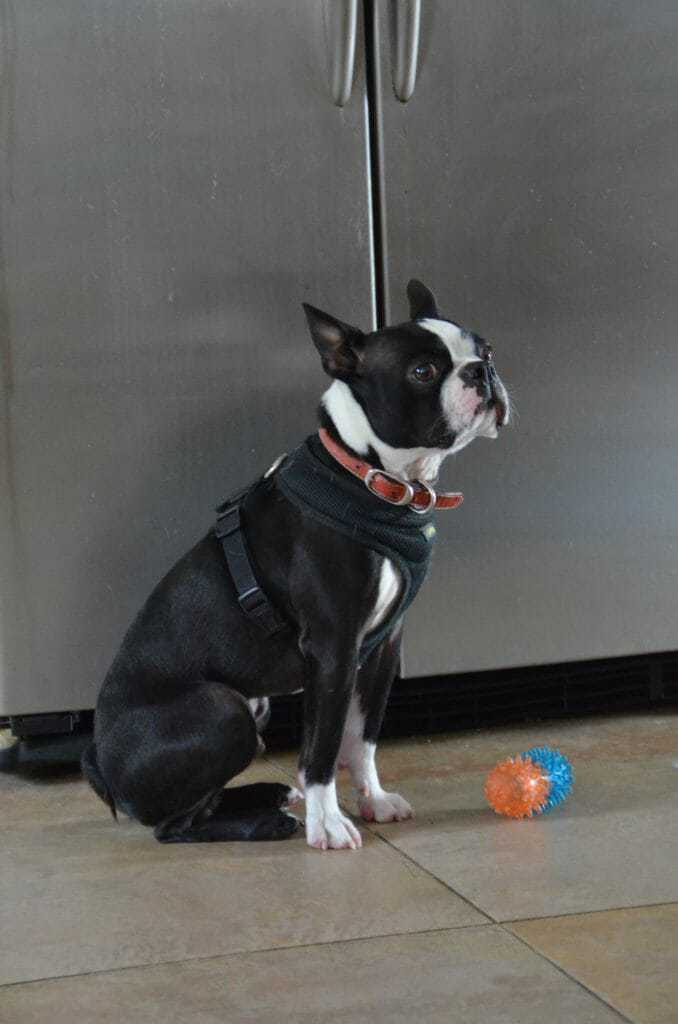 For perspective, you can see just how small Casey is compared to the standard refrigerator that he’s sitting in front of. He’s only halfway to the handles.

This small dog can come with a big price tag.

Most purebred puppies are expensive and this one is no different. Prices for puppies range from $1,000-$2,500 depending on the age of the dog, the bloodline, and the amount of care it has received while with the breeder.

Training a Boston Terrier can sometimes be a challenge.

While all Boston Terriers can be trained, especially when you start working with them when they are young, some in the breed have also become known more for their cheeky sense of humor rather than their ability to be trained. Casey is the second kind of Boston. His owner showed me video after video of him chasing and fetching his ball. When it came time for me to film him doing the trick, he pointedly refused to do it despite obviously being a very intelligent dog.

It’s frustrating to the owner that Casey was clearly choosing to ignore the toys she kept throwing his way, but he clearly was having fun with her, which became fun to watch.

The Boston Terrier is generally good with kids, but needs supervision.

Boston Terriers are generally tolerant of children. However, because little children can’t always sense when a dog needs to be left alone and a small dog can begin to feel intimidated by little hands that constantly touch him, it’s best to supervise any child when he or she is with the dog.

Have other pets? No problem with the Boston Terrier.

The Boston Terrier is a breed that is very cat- and dog-friendly, and would love the socialization that would come from having another pet in the home. If humans aren’t around to hang out with, another animal is a close second.

The Boston Terrier is prone to some serious health issues.

Here are four of the issues that are often found in Bostons. 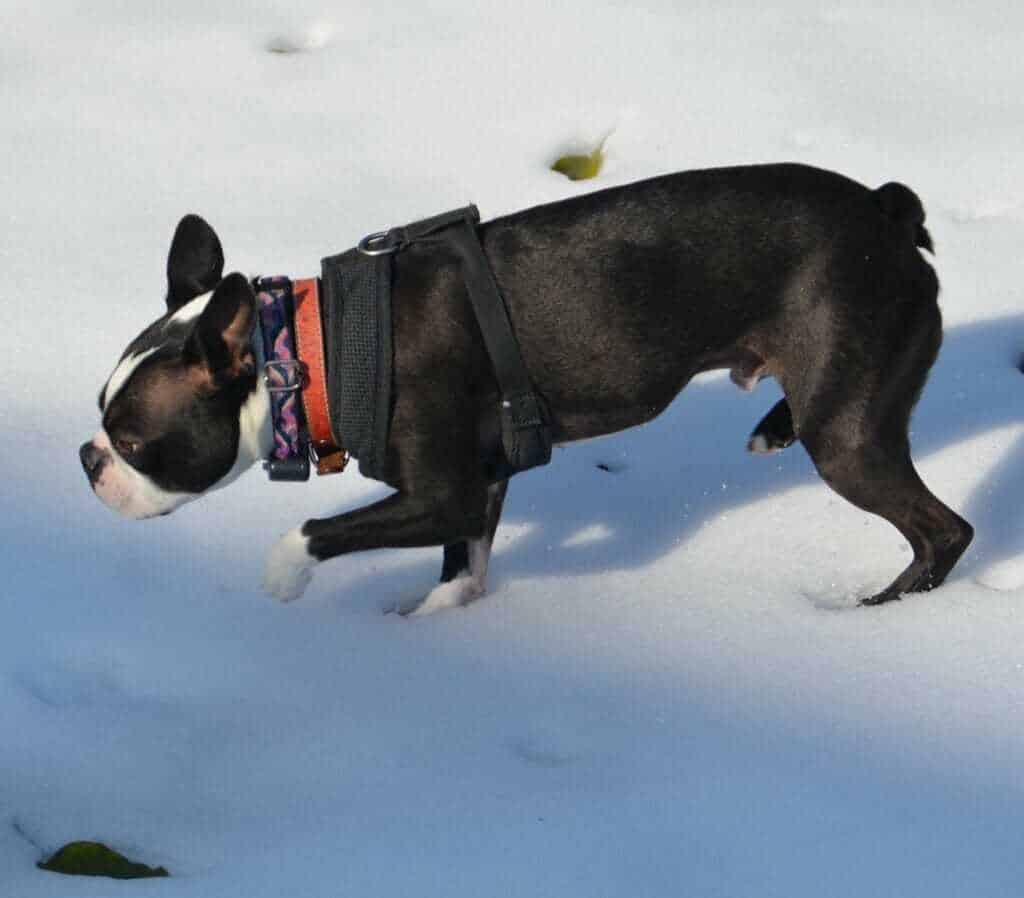 The Boston Terrier is low maintenance.

This breed requires minimal exercise, and most are content with a couple of smaller walks each day. But the Boston Terrier needs you to go with them. This is not a dog that will enjoy roaming a backyard by himself. Often if you just release him to do his business in the yard, he will sit at the door instead and wait for your return. Boston Terriers don’t shed very much at all. They don’t require a groomer and only need occasional brushing and baths to keep that beautiful coat sleek and clean.

The Boston Terrier is an indoor dog.

Any kind of excessive weather can be hard on the Boston Terrier, no matter if it’s cold or heat and humidity. That’s mostly due to having the flat faces, which can make breathing a challenge in extreme weather. This is a dog that was meant to be indoors. Their temperament and personality make them great fits for apartment living. 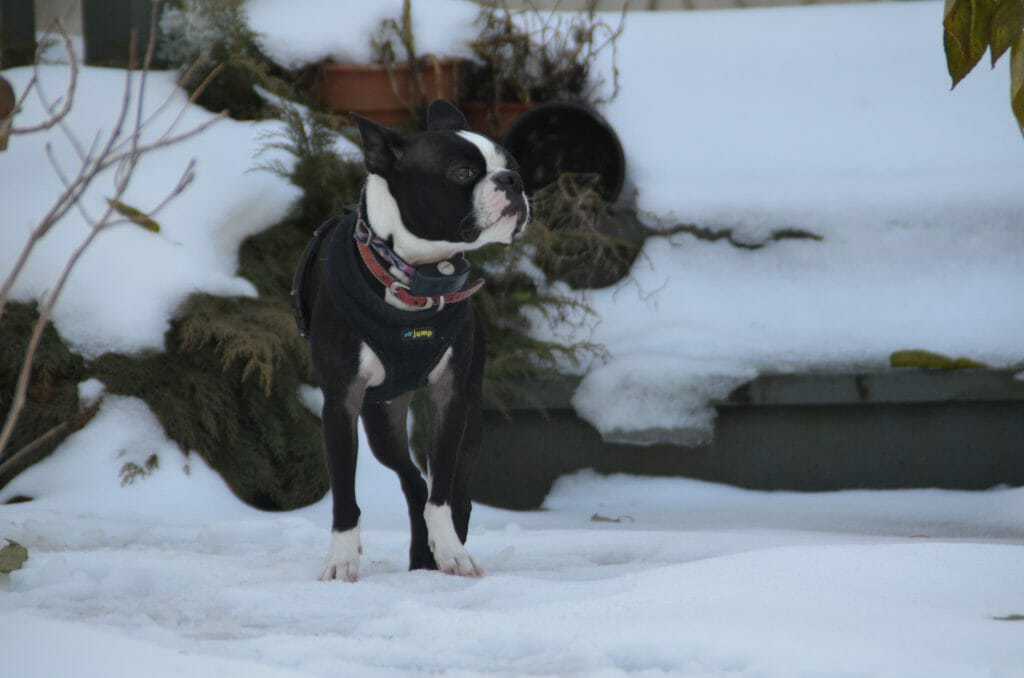 The day that Casey was photographed was cold. Casey would venture a few feet from the house and then immediately head right back to the door. He only wanted to go back inside and get out of the cold weather.

The nickname of the Boston Terrier is “The American Gentleman.”

They earned this moniker because of the beautiful and unique black-and-white coat that almost all Bostons possess. The only other colors besides black and white that are considered acceptable for a Boston are brindle and seal. Brindle is a mixed pattern of the black and white, and seal is a very dark brown that appears black until it gets wet. 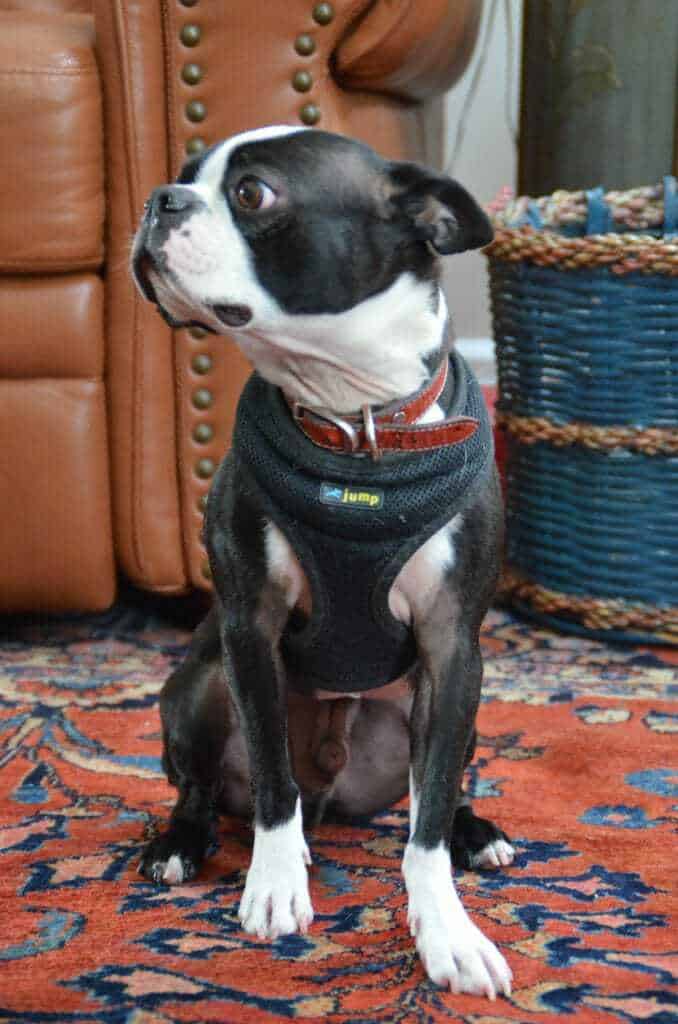 You can see the beautiful black-and-white coat of the Boston Terrier here, complete with white paws and black nose. The pattern is distinct to this breed.

Beware of gas from the Boston Terrier.

Their flat faces mean short muzzles, which leads to having to take in a lot of air. As they’re taking in all that air, some becomes excess. And in case you weren’t paying attention in Biology, what goes in, must come out – and for the Boston, it exits out the rear. So beware of gas. My new Boston friend Casey has been known to clear a room with his flatulence!

Boston Terriers have had the run of the White House with two different presidents. President Gerald Ford owned two during his time in office, Fleck and Spot, and President Warren Harding owned one, Hub.

The Boston Terrier is a beautiful, unique, and all-American dog. It would make a great addition to the right house, so consider these 14 things before you buy a puppy!