The first time I met Garbo, I noticed her striking resemblance to a monkey. Garbo was a rescue that my neighbor Carrie adopted from our local pet shelter. That little black face, those intelligent eyes, the cute little beard – I wasn’t sure if she was a dog or a “Wookie” from Star Wars.

I have always prided myself on knowing about different breeds, but when Carrie told me that Garbo was part Affenpinscher, I was gobsmacked. Here was a dog that I had never encountered.

Affenpinschers are considered to be in the Toy Group, which includes the Brussels Griffon, Chihuahua and Havanese.  They are little dogs with lots of personality. Here are 11 things you should know about the Affenpinscher: 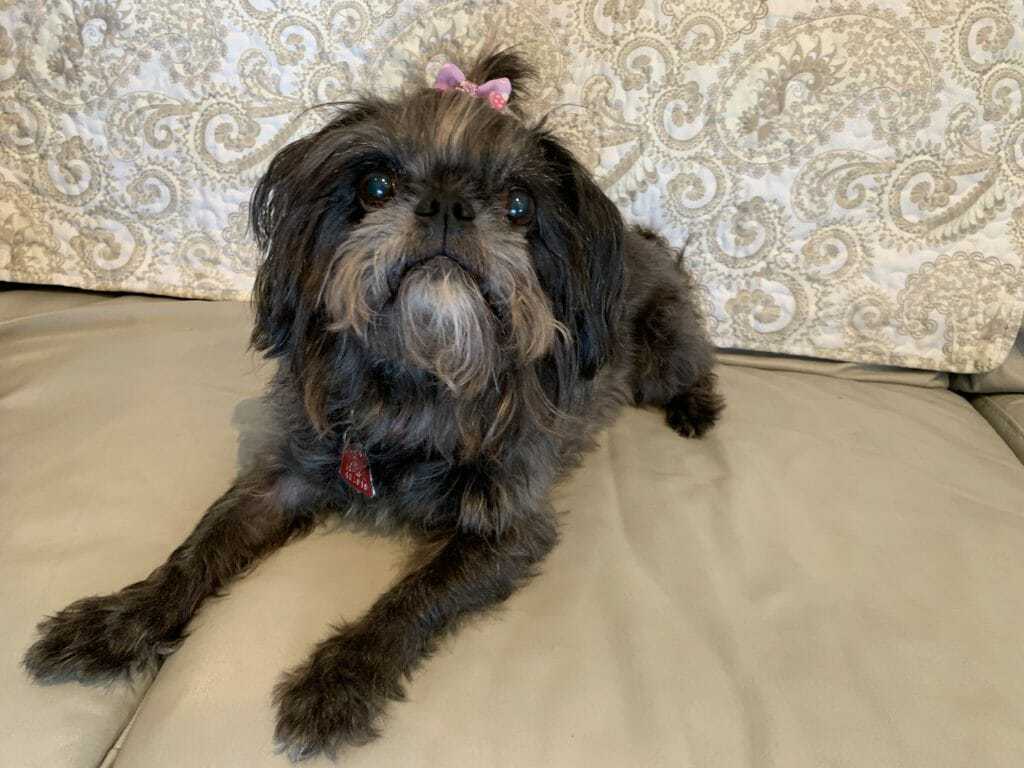 Garbo relaxes on the couch, but even at 11 she’s quite active.

They were bred to be ratters

Affenpinschers originated in Germany and were bred to kill mice, rats and other small rodents in stables, stores and homes. They first emerged around the 1600s. However, in the 1700s they warmed their way into the hearts – and beds – of humans, ratting by day and sleeping inside at night.

What their name means

In German, the name means monkey dog or ape terrier. You only need to look at their face to see why. They are alert little dogs and will let you know if someone, or something, is around. However, they are not yappers like many other dogs in the AKC Toy Group. 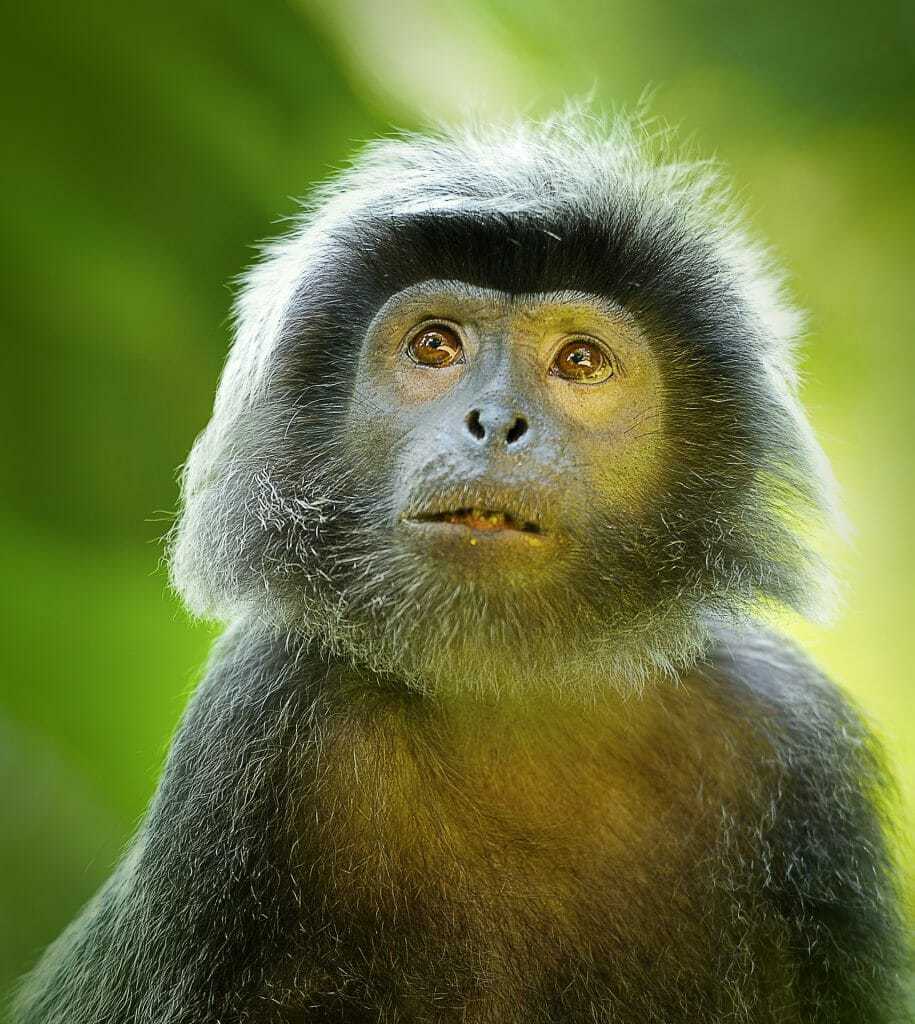 The protruding mouth and short snout give the Affenpinscher its monkey-like appearance.

Little dog with a big personality

The Affenpinscher, like all toy dogs, is small in stature. They generally weigh between seven and 10 pounds and range in height between nine and 12 inches. Although the Affenpinscher looks like a cross between a dog and a monkey, they also have a human-like quality to them. The words most often used to describe this breed are “intelligent,” “alert” and “inquisitive.”

Training them takes time and patience

In France, the Affenpinscher is called the “diablotin moustachou” or “mustached little devil” because they can be a bit mischievous. Breeders will tell you this isn’t a dog you train, it’s one you have to befriend.

Carrie describes Garbo as having a “take charge” attitude. She knows when it’s time to go for a walk and heads over to her leash, nudging her brother Mochi, a West Highland Terrier (aka Westie) along. She leads, he follows, she says. Affenpinschers can also can be stubborn, so they have a reputation as being difficult to train, but that’s not necessarily true. They are intelligent and want to please; you just need to take the time and have some patience.

This breed isn’t well-known, but …

Retrievers, German Shepherds and Bulldogs are among the most easily recognized and popular dogs, according to the American Kennel Club, ranking among the top five. The Affenpinscher, not so much. The breed ranks 148th out of 193. One of the reasons they are so rare is that there are not many breeders. The AKC lists only 13 in the U.S. In addition, they generally only give birth to small litters of one to three pups. By comparison, the AKC lists nearly 1,100 Golden Retriever breeders and their litters tend to be significantly larger – sometimes up to a dozen puppies.

Despite their rarity, some have found their place in the history books

Renoir included the Affenpinscher in “Luncheon of the Boating Party.” Although admitted into the American Kennel Club in 1936, it wasn’t until 77 years later that the Affenpinscher became a top dog. In 2013, Banana Joe, a five-year-old Affenpinscher, became the first of his breed to win Best in Show, beating out nearly 3,000 other dogs at the 137th Westminster Kennel Club Dog Show. Banana Joe retired right after that win. 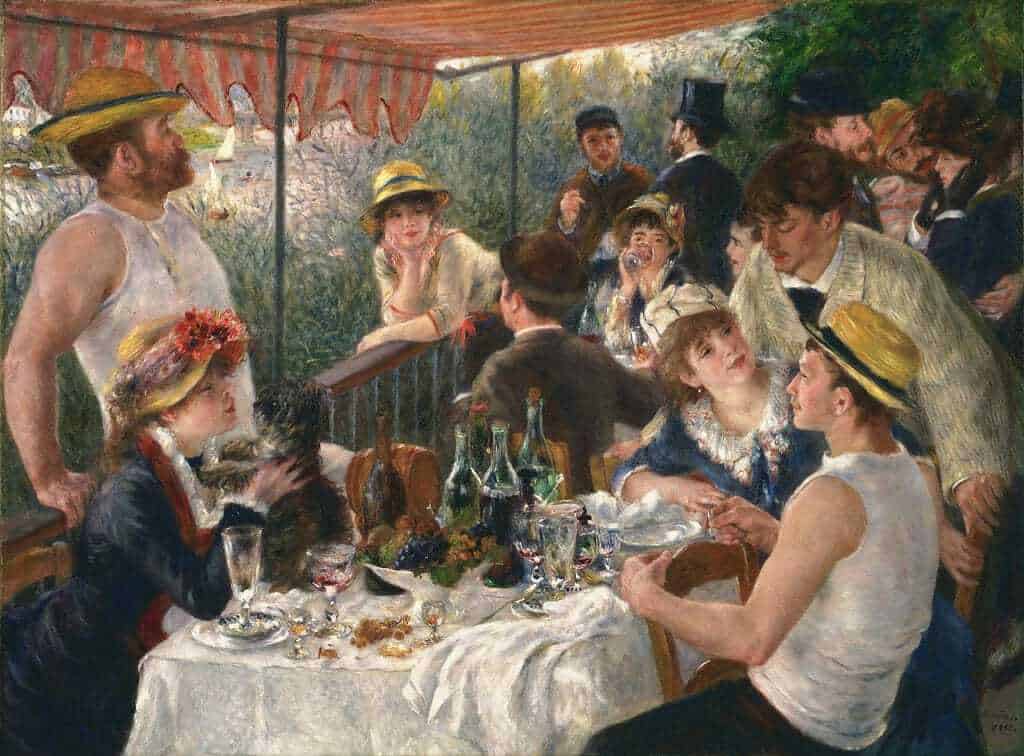 Luncheon of the Boating Party

They are easy to care for

The Affenpinscher has a medium-length, wiry coat that has a naturally scruffy look. The coat doesn’t grow very fast, so you need not trim this breed often. The Affenpinscher Club of America put out a grooming guide, should you choose to tackle the job yourself. The hair on this dog’s head should be trimmed to expose their adorable eyes, or, if it gets too long, you can always pull it back with a bow like Garbo, until the next trim is due. They shed seasonally, but you should brush them a couple of times each week to keep the coat from matting. While the standard coat color is black, they also come in gray, silver, red and tan.

Because they are low-shed dogs, Affenpinschers are considered to be hypoallergenic. That doesn’t mean they don’t shed at all, but they don’t shed much. If you are one of those people who worry about your furniture or your clothing being covered in hair, this is a good breed if you don’t want to have to vacuum daily. 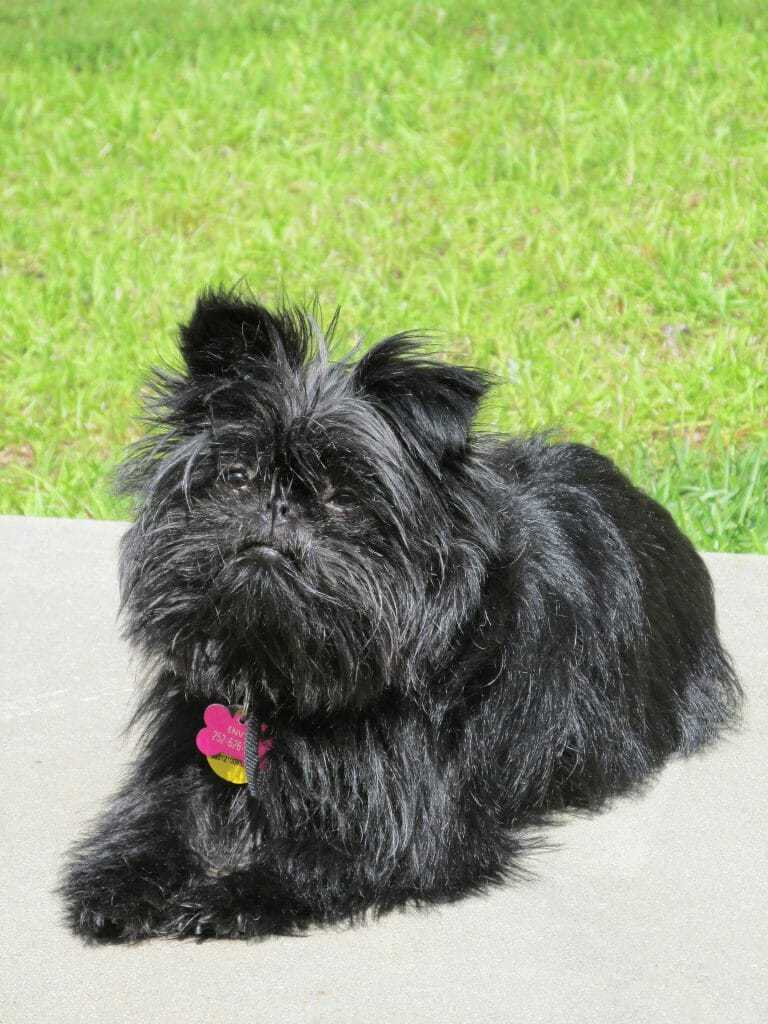 Affenpinschers do well in apartments, but do need regular exercise.

Affenpinschers and small children, other small pets, are not a good idea

If you are considering a dog and you have small children, this breed may not be for you. Because they are small, Affenpinschers can be easily injured. This dog is better suited for families with older children or just adults. If trained properly, they do get along with other dogs and cats. However, because they were bred to chase vermin, having smaller animals such as guinea pigs, rabbits, hamsters, rats or mice is not a good idea.

They have some health problems

Like many small dogs, Affenpinschers tend to live longer than bigger breeds. The average lifespan is 12 to 15 years. They can have issues including luxating patella, a condition in which the kneecap dislocates, which is common among smaller breeds. They also can suffer from heart problems, vision problems, eye problems and hip dysplasia, which is more common among larger breed dogs. Be careful in hot weather. Short-faced breeds, including the Affenpinscher, the Pug and the Pekingese, to name a few, are brachycephalic (short-nosed) and can suffer from breathing problems if they get overheated. 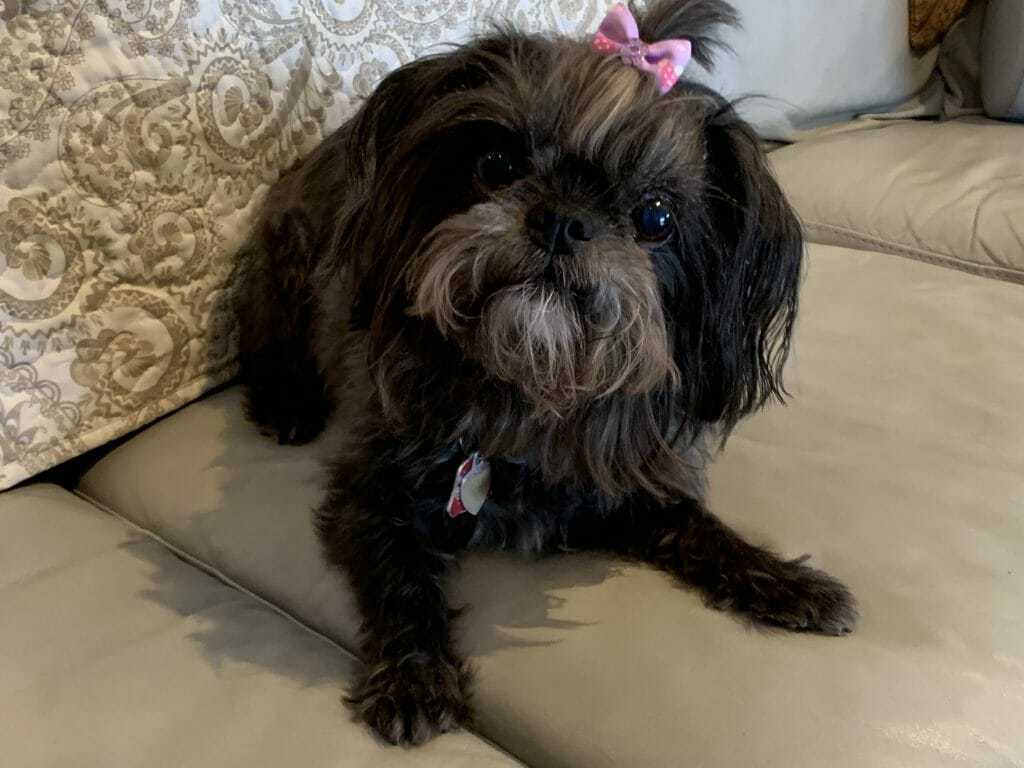 Garbo is showing some gray, but she definitely doesn’t show her age. She’s still quite spunky.

They don’t need a lot of space, but they do need exercise

Because they are small, the Affenpinscher can be perfectly happy living in an apartment. Still, they are energetic little dogs. While they can get their exercise indoors, it’s best to take them on a couple of short walks daily. However, as mentioned above, if it’s hot outside, it’s best not to get them over-heated. Keep in mind they don’t like being alone and love to spend time with their human so any playtime is a good time for them.

If you’re looking for a unique little companion with lots of personality, this dog may be for you. It doesn’t shed a lot, but probably won’t be a good fit if you have young children or smaller pets such as hamsters, guinea pigs or rabbits. 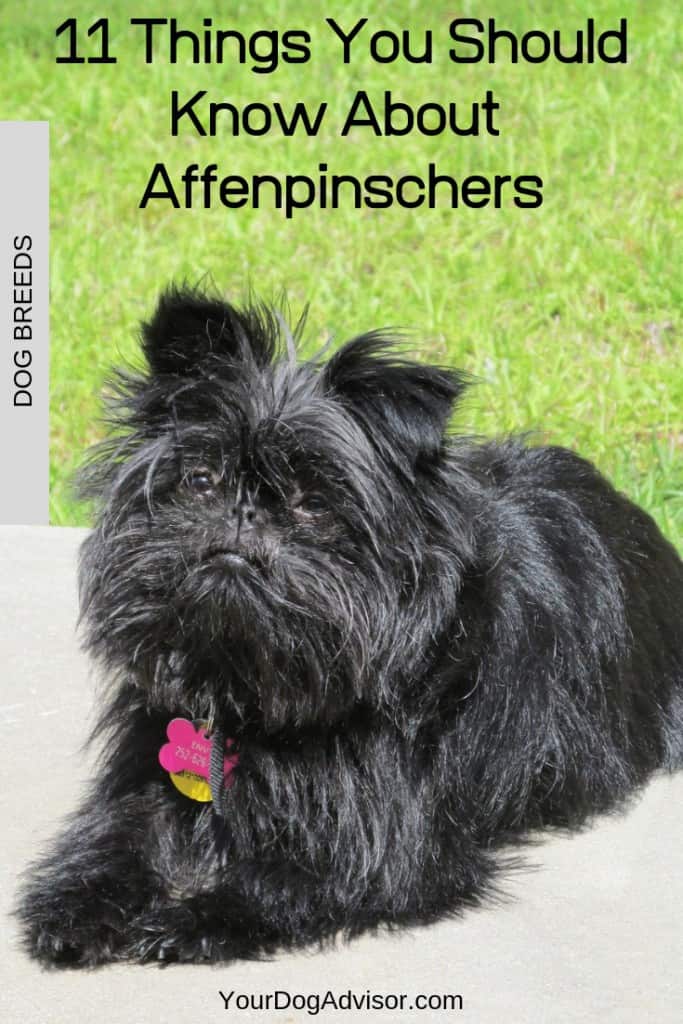