When you think of the fastest dogs in the world, you’re probably not thinking of the Vizsla. You should be.

The Vizsla is tied for the third fastest dog in the world with the Afghan Hound. Instead of being known for their speed, though, This breed is known and recognized more for their beautiful red-brown coloring, as well as their fantastic hunting abilities.

Just how fast is it? Read on to find out that and 12 other things you need to know about this beautiful breed.

They can run 40 miles an hour.

You read that right – 40 miles per hour. They can actually keep up with a car’s average speed. The only dogs faster than them in the world are the Greyhound (45 mph) and the Saluki (42 mph). Because of their rapid pace, you need to make sure that you don’t ever let this dog off-leash in an unfenced area. You likely won’t be able to catch it before it is long gone.

This dog is so fast that he actually outran his ball – by a lot – and had to double back to get it.

Most people pronounce the dog breed as Viss-la. However, you have to take into account its Hungarian pointer background when you make your pronunciation. The correct way to say “Vizsla” is Veesh-la. This pronunciation is due to its European roots.

They are a red-brown color and the AKC requires they stay that way.

The American Kennel Club has strict requirements for dogs to be qualified as purebred within its registered breeds. The Vizsla is no exception. In addition to requirements regarding the size of the dog (see above) and the coat length (must be short smooth – long-hair disqualifies a dog), the beautiful and smooth red-brown or coppery coat color (also called “golden rust”) is a must to be American Kennel Club-registered. If any part of the dog’s nose is black, the dog will not be considered for registration. 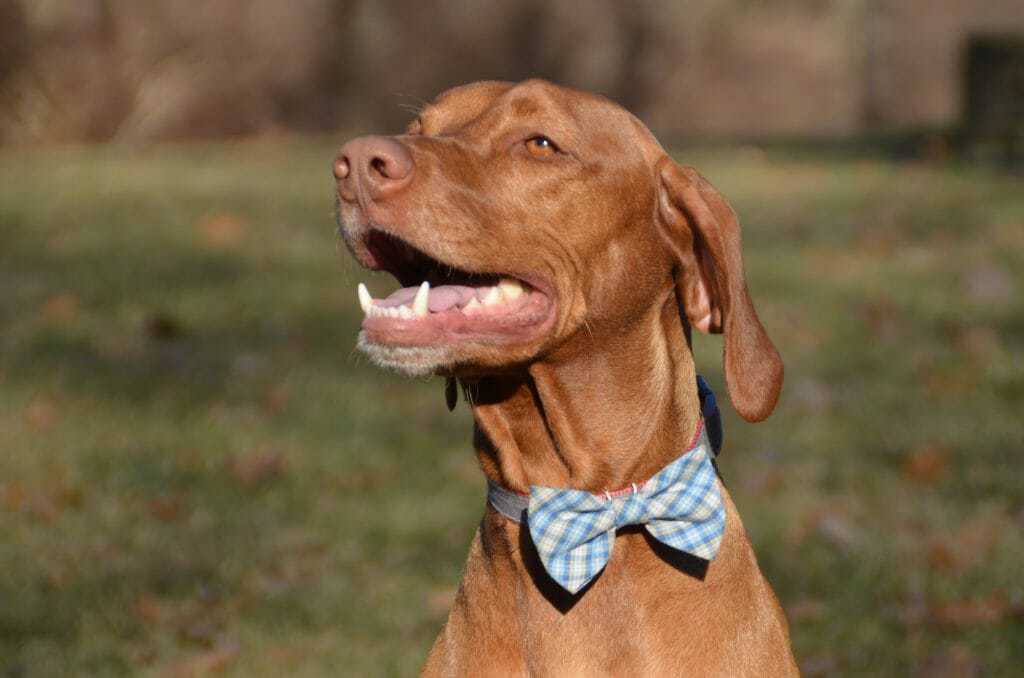 Copper is a stunning dog. The first thing you notice is the color of his eyes that match his fur. Note the brown nose as well, which allows him to register for the AKC.

Its history is found in Hungary.

The ancestors of the breed that we know today came settled in Hungary c. 900 A.D. The Magyar people were originally known less for their dogs and more for their horses, which were agile, sturdy, and fast. The Magyar people set out to breed dogs that possessed the same qualities. Hungarians continued to breed the dogs through the centuries, and eventually, today’s Vizsla dog breed was born. Its nickname is the Hungarian Pointer.

According to the Vizsla Club of America, the first of the breed to arrive in America was a mother and her two pups. Revived after near extinction after the end of World War I, they arrived in Kansas City after World War II, in 1950. Their registered owner was an employee of the U.S. State Department. A year later in 1951, a male also came over and joined the female. One year after that, in 1952, the first litter of Vizsla pups was born in America.

These dogs need to run.

We’ve already established that they’re fast dogs, so it should come as no surprise that they need significant daily exercise time to keep them physically and mentally stimulated. According to the Vizsla Club of America, Vizslas need a minimum of 30 minutes a day, but some of that being a walk on a leash, and some of that being a hard run off-leash. A Vizsla that is not given the proper amount of exercise and training is a difficult dog to live with. 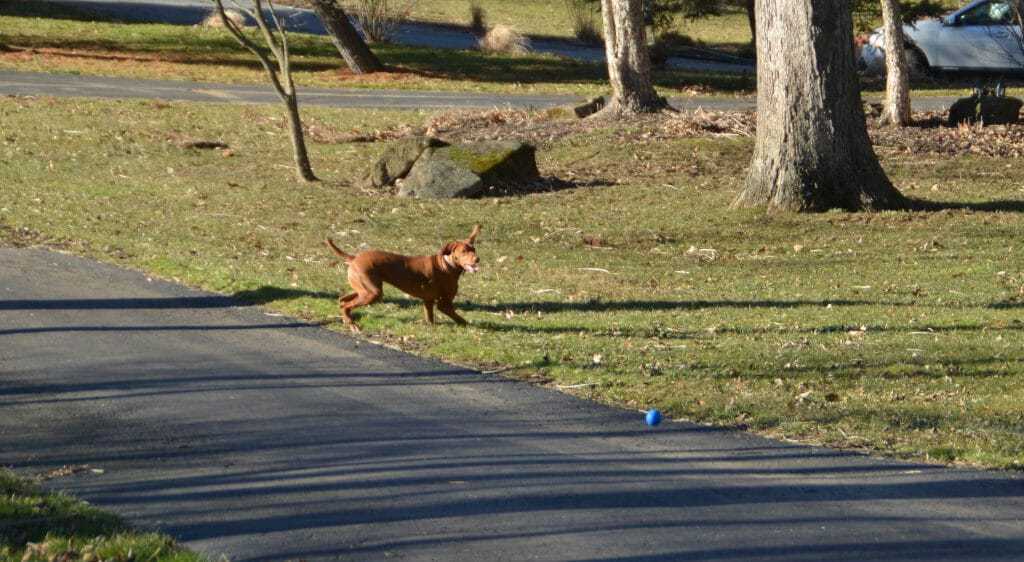 Copper’s owners have a large yard and it’s got an electric fence circling the perimeter so that the dog knows his boundaries and stays within them,  yet still has plenty of room to run.

Apartment living would be tough for this breed.

The smaller space that is usually the hallmark of apartment living can be tough for the Vizsla precisely because of how much they need to move about. The best environment for this dog is a home with a fenced-in yard that will allow the dog to run freely and get his energy out in a productive way. 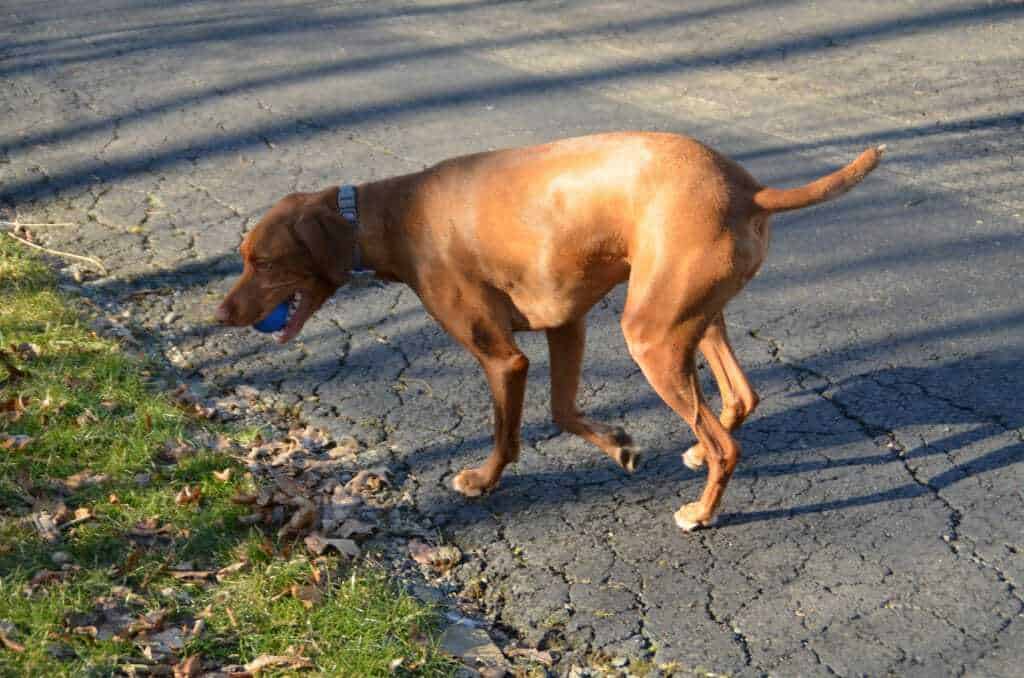 Copper didn’t let go of his ball for most of the entire time he was playing outside. If he wasn’t chasing it, he was dropping it in front of his owners, begging them to throw it. He had just come back from a long run but still had leftover energy to chase his ball around the yard.

While they definitely need exercise, the rest of their care is minimal.

This breed needs the same kind of care that most other breeds do: They need to have their ears cleaned, nails trimmed, weight checked, and teeth brushed regularly. Their short coats are easy to groom and maintain. They don’t shed much of their coat and what they do is easily controlled with a grooming brush and a bath 4-5 times a year.

They are eager to please.

This is a great dog that was bred to be a hunter. They want to chase the kill and retrieve it for their owners. This breed doesn’t want to be separated from its owner, but rather constantly be near his owner and work hard for him. Because of that desire to please, the Vizsla is easy to train. It wants to do well and is smart, very mentally capable of following a lot of commands. The hunting dog  also excels at agility events like tracking and hunting tests. 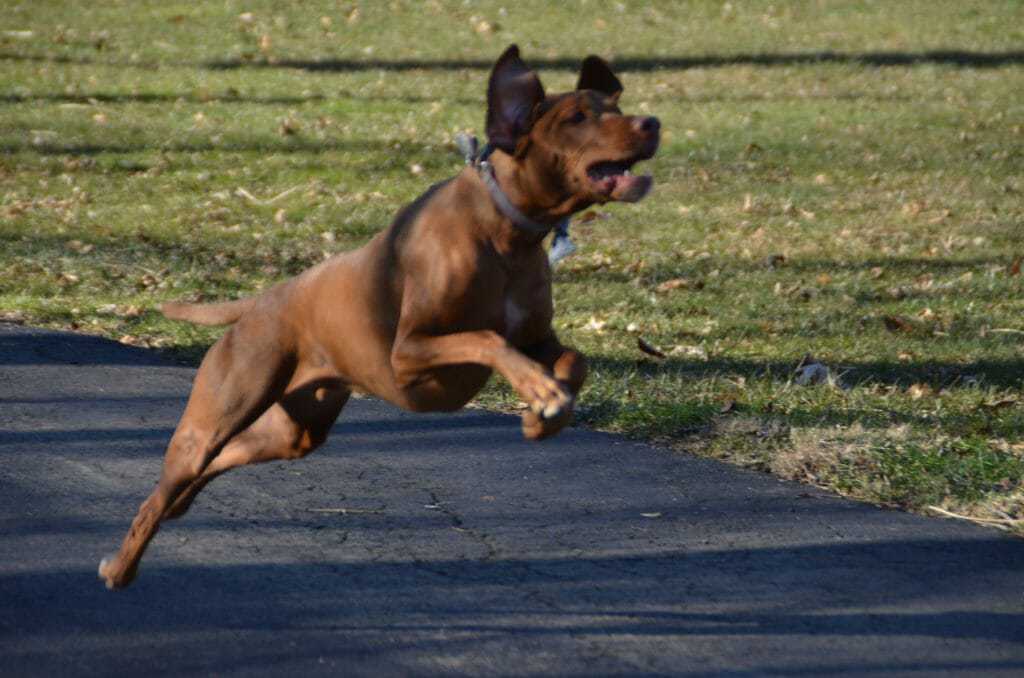 Caught in mid-leap, Copper’s agility and strength is on clear display.

They get along well with dogs, cats, and kids.

If you’re looking for a dog that easily cohabitates with another dog, your cat, or your kids, this dog is a great candidate any day. However, you’ll need to watch them when they’re around puppies, kittens, and small children. Because of its strong hunting drive, the Vizsla may try to round them up and could unwittingly hurt them. 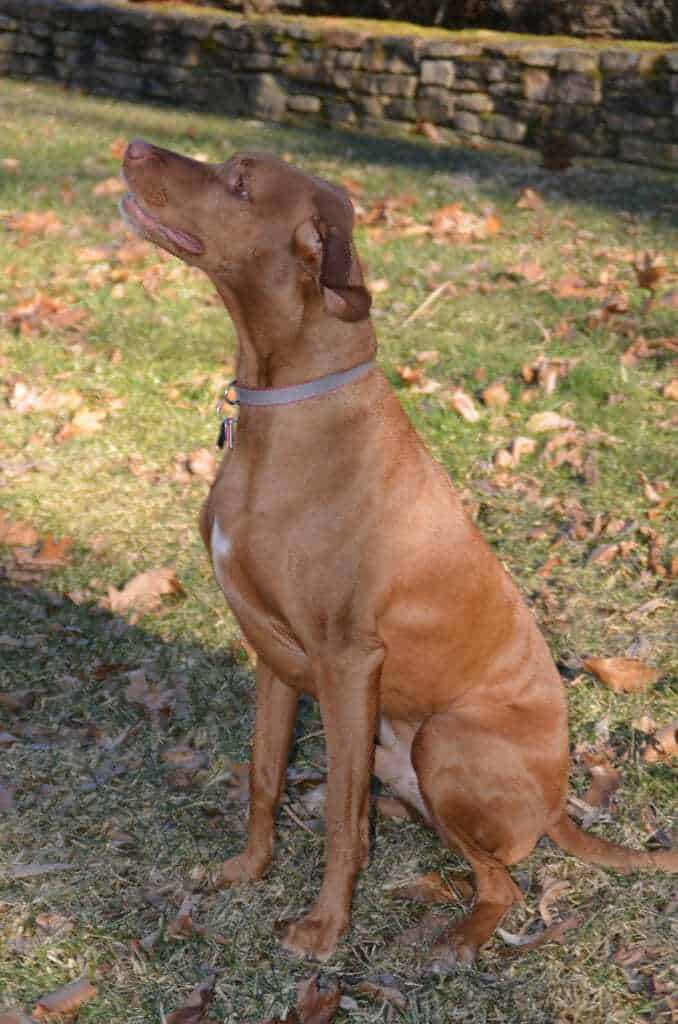 The Vizsla’s trainability makes him a good candidate to be with children and other animals. He can be taught to stay and hold this good position so that the dog stays calm in if other animals and children are acting a little crazy.

They have some potential health issues.

As with most purebreds, there are certain health issues related to this particular breed that you want to check on before purchasing a Vizsla. Common ailments that can plague this breed include epilepsy, hip dysplasia, certain cancers, blood clotting problems, and eye issues. You should get an independent certification of health before purchasing your dog. You will find that you also need to avoid too much stress on a puppy’s joint and bones while they are still growing. This dog loves to run but should work on restraining him until his body is old enough to handle the stress.

Puppies are available for a steep price.

If you’re looking through the AKC website, you’ll find that there are Vizsla puppies for sale across the United States. The cost of puppies varies based on gender and age. It ranges anywhere from $1,200 to $1,800. Each puppy comes with AKC papers as proof of being purebred.

The Vizsla may not be as well-known as other breeds of its size, but anyone looking for a high-energy companion to accompany them on long walks or runs, or to enter into sporting events should give serious thought to owning this breed.