While poodle mixes are becoming more and more popular, many prospective dog parents overlook one of the older and best mixes- the Peekapoo.

Peekapoos, or Pekeapoos, depending on your spelling preference, are truly little bundles of joy.

But don’t be fooled by their small stature. Peekapoos aren’t your typical purse-sized pups.

Keep reading to learn more about the Peekapoo breed. 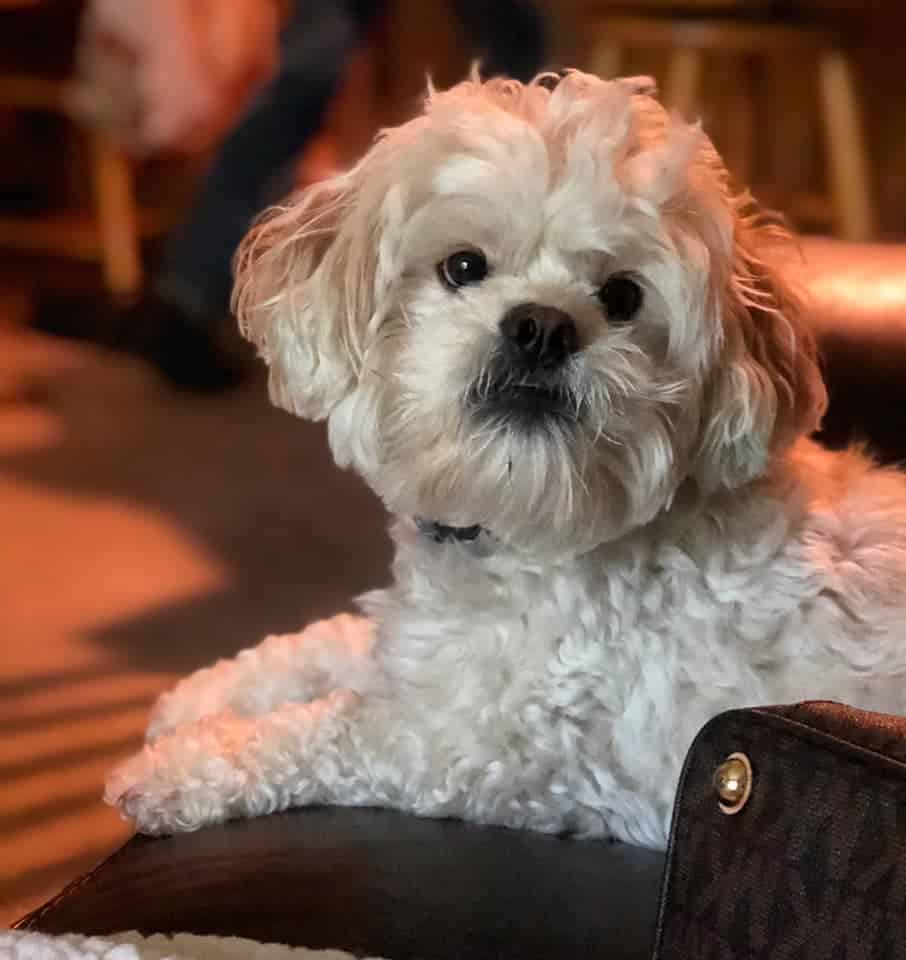 Scotty the Peekapoo relaxing in “his spot” on the couch.

1. They Are a First Generation Cross

Peekapoos are a crossbreed of a Pekingese and a miniature or toy poodle.

Peekapoos are almost always bred as a first-generation cross. This means that both of a puppy’s parents are purebred. 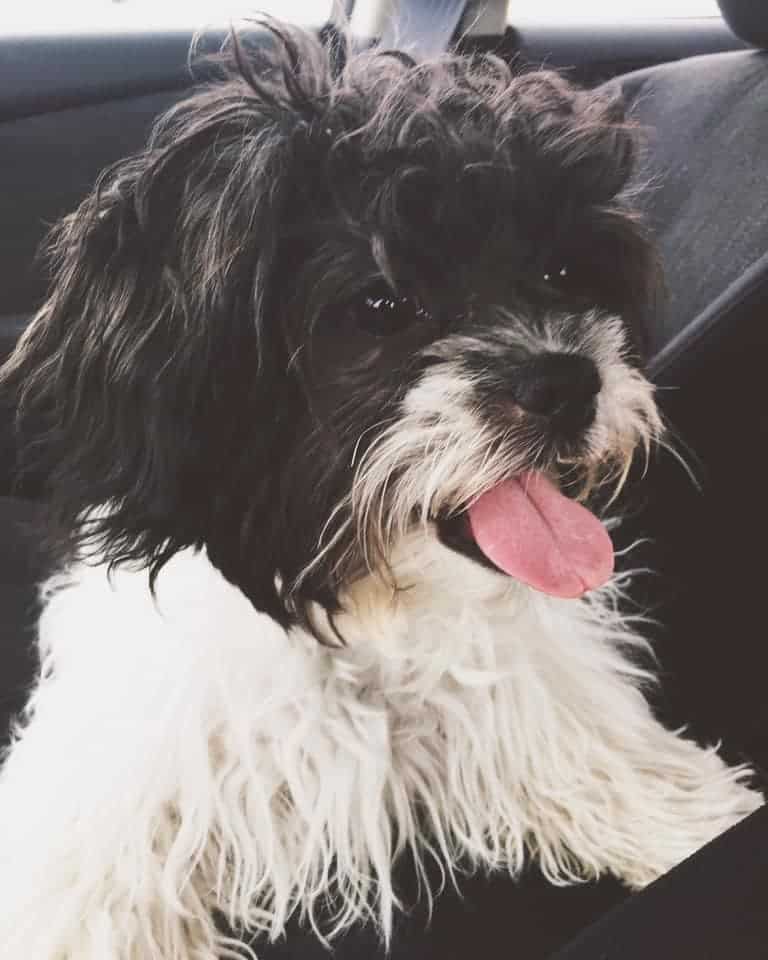 Winston the Peekpoo was born from a female Pekingese and a black toy poodle.

2. They Were One of the First Designer Dogs

Peekapoos were one of the first crossbreeds or designer dogs.

While no one knows exactly how the breed came to be, most speculate that the first Peekapoo was the result of accidental breeding. The dog that resulted was so lovable that people began breeding them intentionally.

Peekapoos first appeared in the United States in the 1950s and saw the height of their fame in the 1960s. The Peekapoo was one of the first poodle-mix breeds.

Pekingese often have an air about them that is passed on to their Peekapoo Puppies. After all, some say Pekingese were only allowed to be owned by emperors.

They were bred to look like miniature lions who could protect their owners. It has also been speculated that they protected Buddhist Monks.

Although most of this is ancient history, the Peekapoo doesn’t take his duties lightly. They often have “little dog syndrome.”

When meeting other dogs, Peekapoos can be overprotective of their owners. They make great guard dogs.

While their bark is bigger than their bite, they are loud enough to scare off any reasonable burglar. Peekapoos can sometimes show food aggression tendencies, but proper training when they are young can alleviate this.

Along with being protective, Peekapoos are loyal. They will follow you everywhere, and I mean everywhere.

You won’t have to worry about your Peekapoo choosing your friend’s lap over your own. You are their human and they are proud to show it. 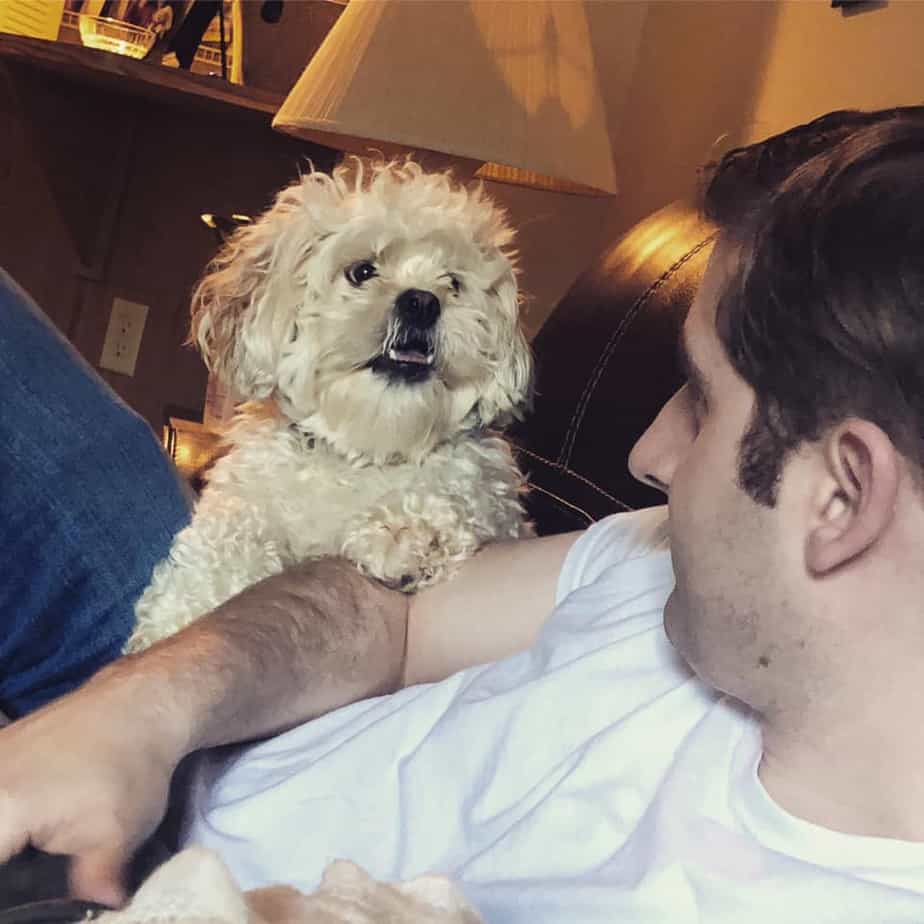 Peekapoos are very protective of their humans.

4. They Have an Underbite

An underbite occurs when a dog’s teeth are not properly aligned. Their bottom row of teeth sticks out further than the top one.

Underbites are totally normal in Pekingese, so many Peekapoos inherit the trait. An underbite adds a certain charming quirk to a Peekapoo that many other dog breeds lack.

The Peekapoo’s underbite won’t hurt him and he probably doesn’t need doggy braces. 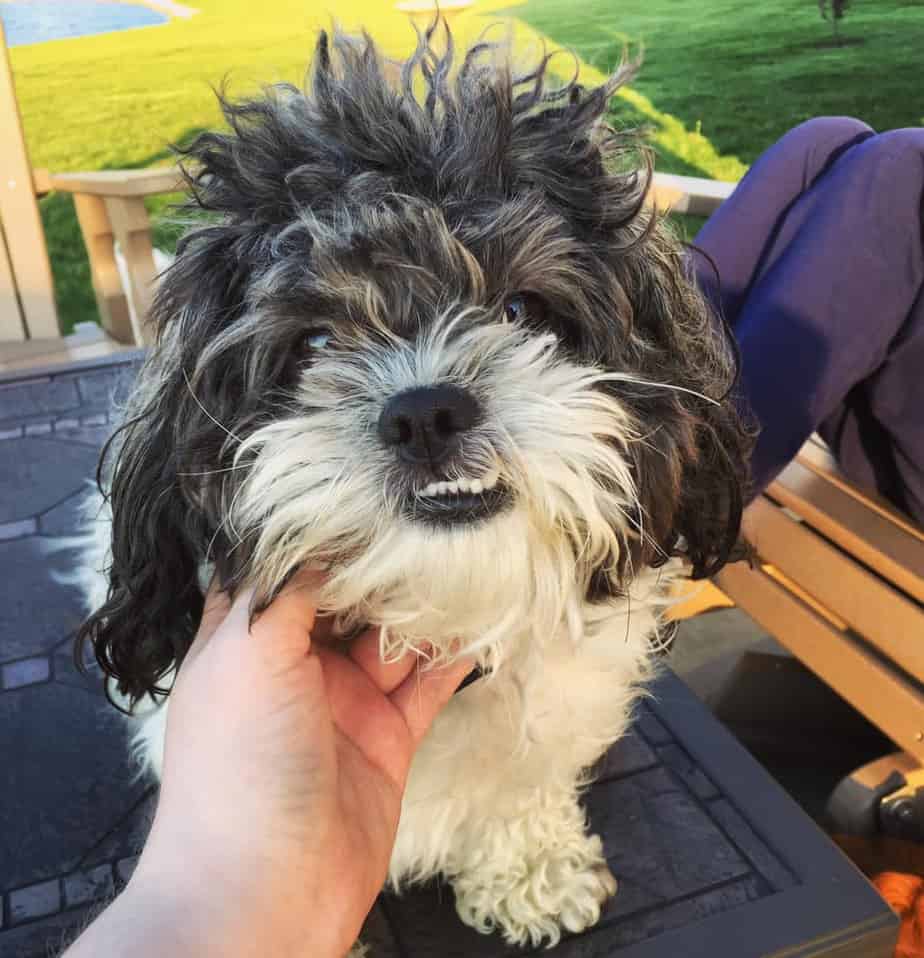 Winston showing off his underbite.

Peekapoos are considered medium maintenance dogs. They should be groomed every 6 to 8 weeks to prevent matting.

While I wouldn’t recommend shaving them completely, they definitely enjoy a shorter summer cut.

In the winter, you can grow their fur out a bit more. If your Peekapoo sports a longer clip or goes longer between trips to the salon, make sure you meet his basic grooming needs at home.

Peekapoos with medium to long coats can mat easily, so weekly brushing is recommended. Use a slicker brush and a metal comb.

If he already has mats, a de-matting brush can work wonders. If your Peekapoo is uncomfortable or in pain, take him to the groomer.

You can also trim his nails, clean his ears, and brush his teeth at home.

If your pup is lightly colored, his face shape may lead to tearing stains. Frequently wiping eye discharge and food remains from his face will help prevent staining.

You should bathe your Peekapoo once or twice a month. Fortunately, many Peekapoos enjoy being groomed.

6. They Are Smart but Stubborn

The Peekapoo is the perfect mix of smart and stubborn.

Some might say they are too smart for their own good.

They get their intelligence from their poodle parent and their attitude from their Pekingese parent. The combination makes for one interesting pup.

Theoretically, training a Peekpoo would be easy because of their poodle intelligence. But that’s where the attitude comes into play.

Completing even basic training with a Peekapoo requires patience and high-value treats. Be patient as it may take a little longer than you’d like to have your puppy reliably potty trained.

Even though my Peekapoo is in advanced training, he suffers from frequent selective hearing. 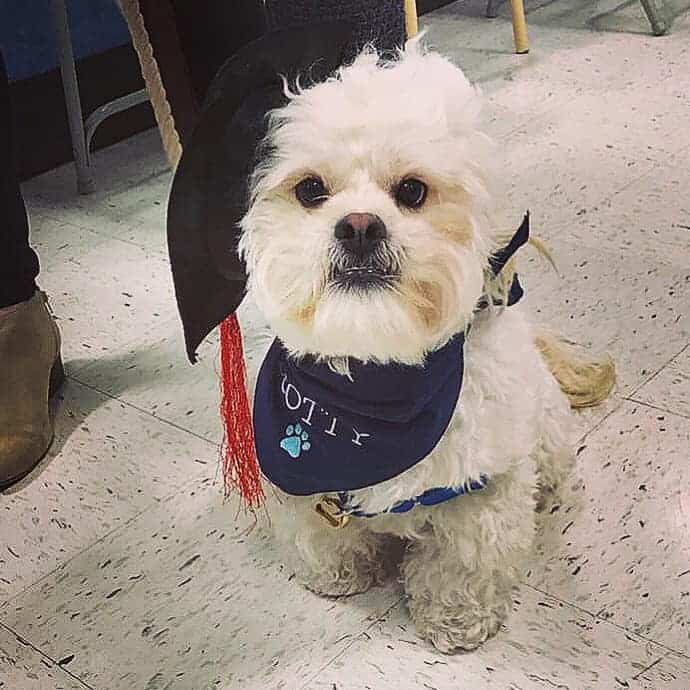 Scotty was a proud graduate from intermediate obedience school.

7. They Are Lap Dogs

If you are looking for the perfect lap dog, look no further than the Peekapoo.

They are the ultimate lap dog. It’s what they are bred for!

Peekapoos have no working purpose other than to be your best friend. Your Peekapoo will sit on your lap for warmth, companionship, snuggles, and sometimes just to make your other pets jealous.

8. Their Appearance Can Vary

As is often the case with crossbreeds, it can be difficult if not impossible to predict the looks of a Peekapoo puppy. Sometimes, looking at a puppy’s parents isn’t enough, as they can inherit traits from their grandparents as well.

My Peekapoo is 20lb and his brother is 12lb.

Peekapoos come in the same colors as purebred poodles. Their coats can either be short or medium length and either wavy or curly. 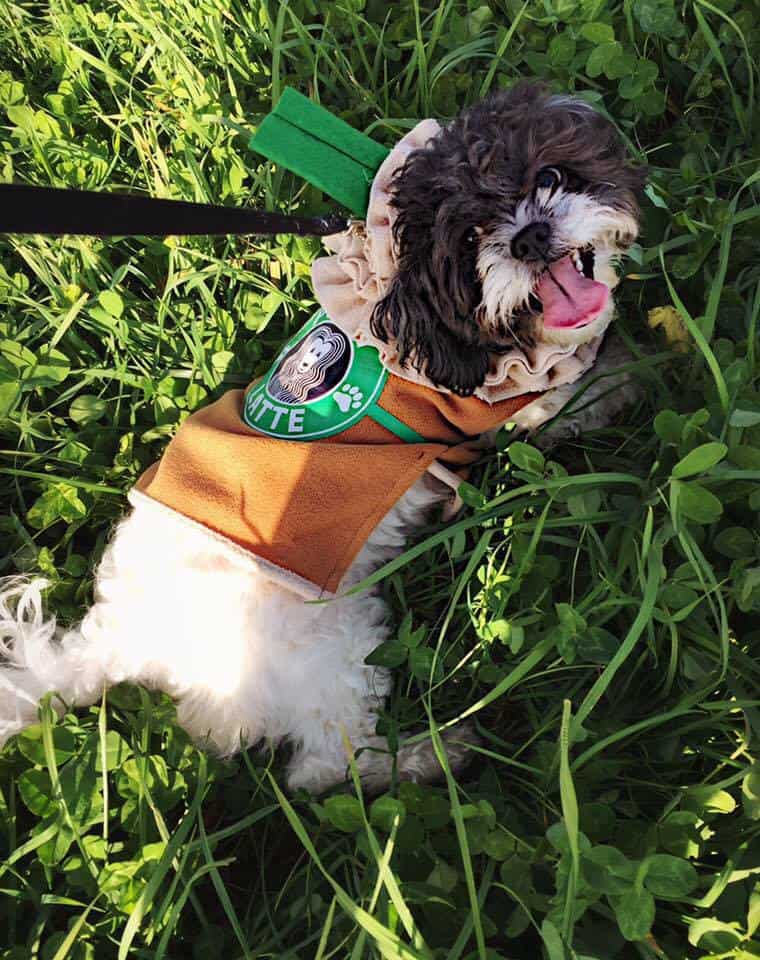 Winston dressed as a “Puppy Latte” for Halloween.

9. They Can be Bought or Rescued

Peekapoos are somewhat rare. They are much less common than other poodle mixes.

Nonetheless, they often pop up at shelters and poodle mix rescues. Your other option is to purchase a Peekapoo from a breeder.

Choosing a responsible breeder will ensure you get a healthy and happy pup.

Because Peekapoos themselves are not often used for breeding, you might have a hard time finding one at a mill dog rescue.

One of the Peekapoo’s biggest selling points is that they are hypoallergenic.

If you are looking for a dog that won’t trigger your allergies, consider getting a Peekapoo. As an allergy sufferer myself, my Peekapoo has been a perfect choice.

I keep him clipped on the shorter side as his fur does tend to act as what our vet called, “a walking dust mop” when it gets too long. If your Peekapoo suffers from allergies himself, keeping his coat shorter will prevent it from trapping dust and allergens. 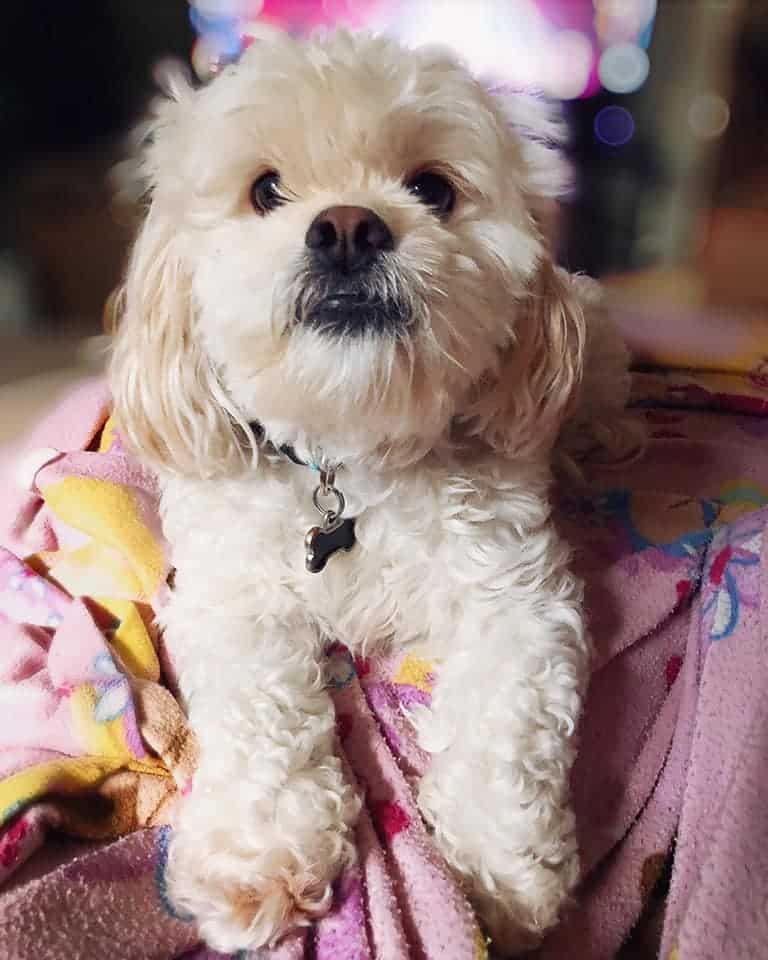 Peekapoos can cuddle on your couch without shedding.

Peekapoos tend to be very sensitive to their environment. This is likely the result of having a purebred poodle parent.

They get plenty of exercise in their daily lives, so additional walks are not necessary. If you and your dog love going on walks, that’s great!

Just be careful not to expose your Peekapoo to overly hot or cold temps. They are sensitive to both heat and cold.

Peekapoos make great apartment dogs due to their size and lack of strict exercise requirements. They can suffer from separation anxiety, though crate training can alleviate this. 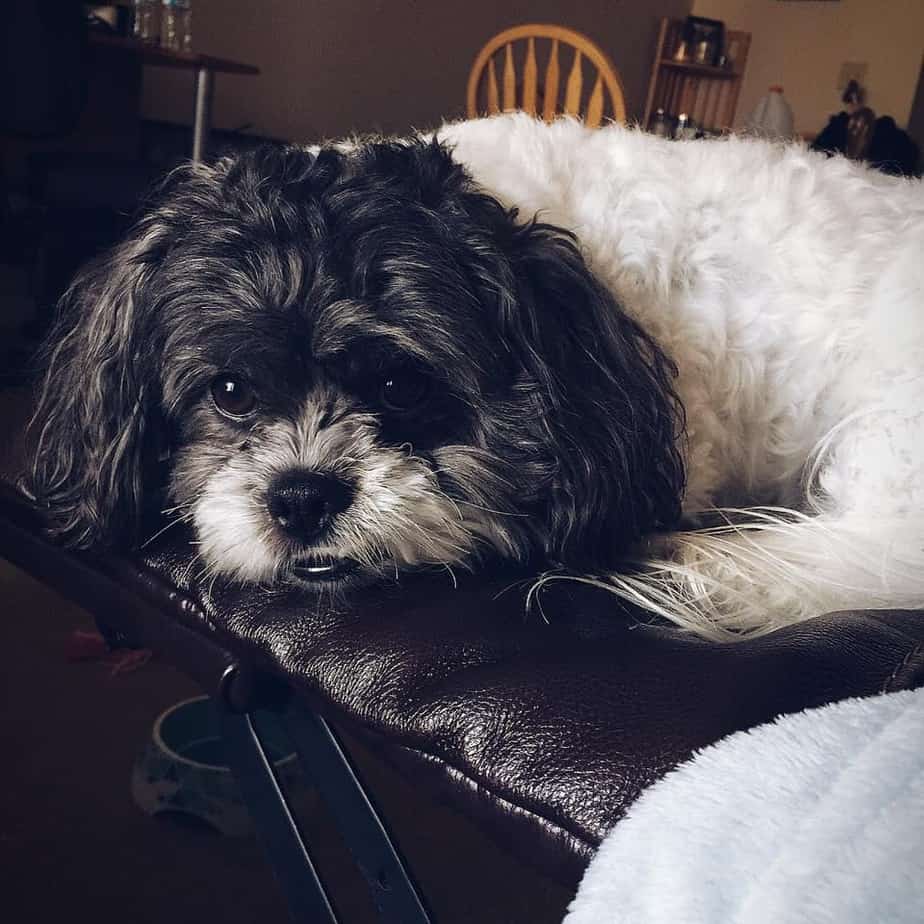 Peekapoos are sensitive to the emotions of their people.

12. They Can Be Brachycephalic

Dogs who are considered brachycephalic have short heads. The shapes of their head, throat, and muzzle often lead to difficulty breathing.

More specifically, their throats and breathing passages can be smaller than average or even flattened. Peekapoos can get this trait from their Pekingese parent.

Because Peekapoos are a cross-breed, you never know exactly what you will get. Poodles have long noses, so it just depends on the genes your pup ends up with.

My Peekapoo experiences some difficulty breathing as a result of his facial structure. If he gets too excited or is outside in hot weather, he breathes noisily and coughs.

All dogs can suffer breed-related health issues and a little snoring is no reason to avoid the Peekapoo. 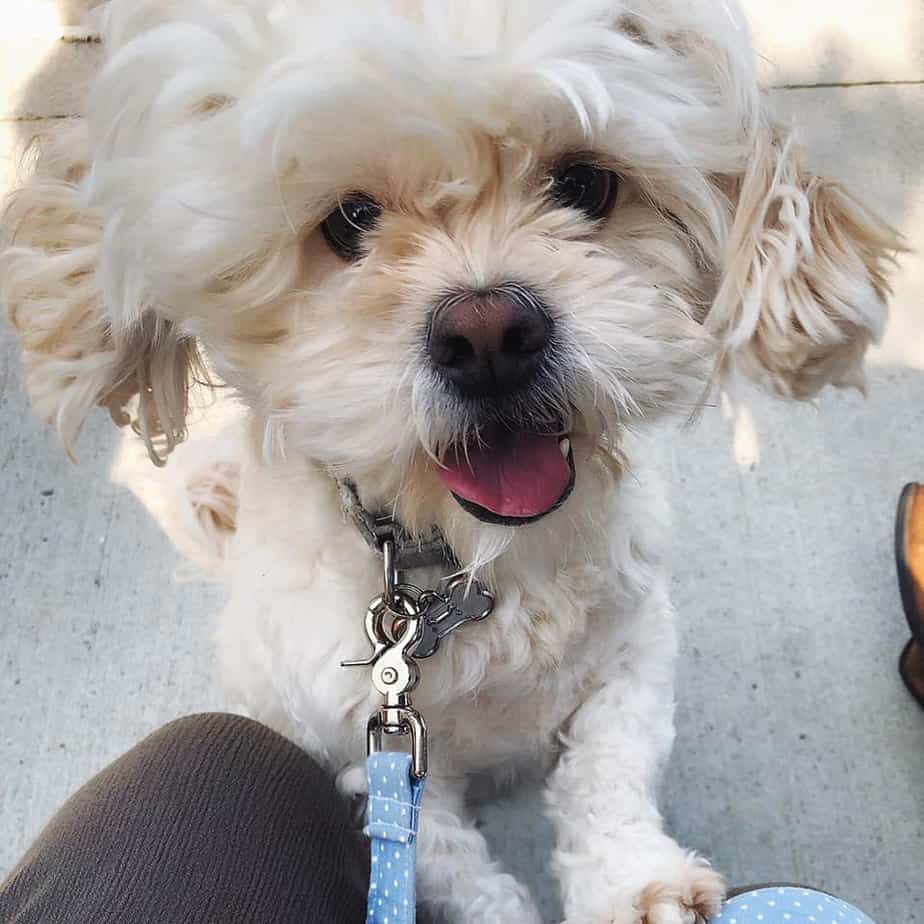 You can always count on a Peekapoo to make you smile..

The Most Important Peekapoo Fact

The most important thing you need to know about Peekapoos is that they are always full of love and laughter.

Peekapoos are the perfect blend of smart and sassy to keep you on your toes. They will always be there for you to lick the tears from your cheeks when you’ve had a bad day.

You won’t find a protector as fierce as the Peekapoo, despite his small stature.

If you are looking for a small dog with a big personality, the Peekapoo is the dog for you. 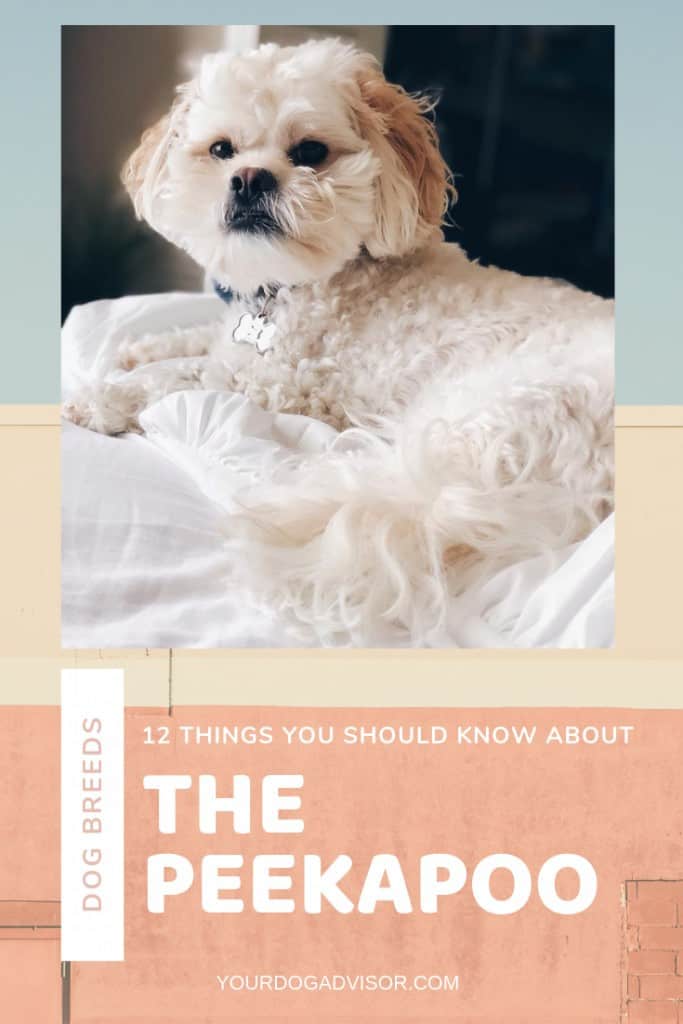