Anyone who has ever met a Papillion knows they are strikingly beautiful dogs. With their long, flowing coats, elegant carriage, and distinctive “butterfly” shaped ears, they give off an air of grace and dignity that belies their diminutive size. A toy breed that typically stands no more than 11 inches tall and weighs an average of 4 to 9 pounds, Papillions come in a variety of colors but are most often white with brown or black markings. Many dogs have a band of color across the nose and around the eyes that matches the color of the ears, further enhancing the “butterfly” effect. 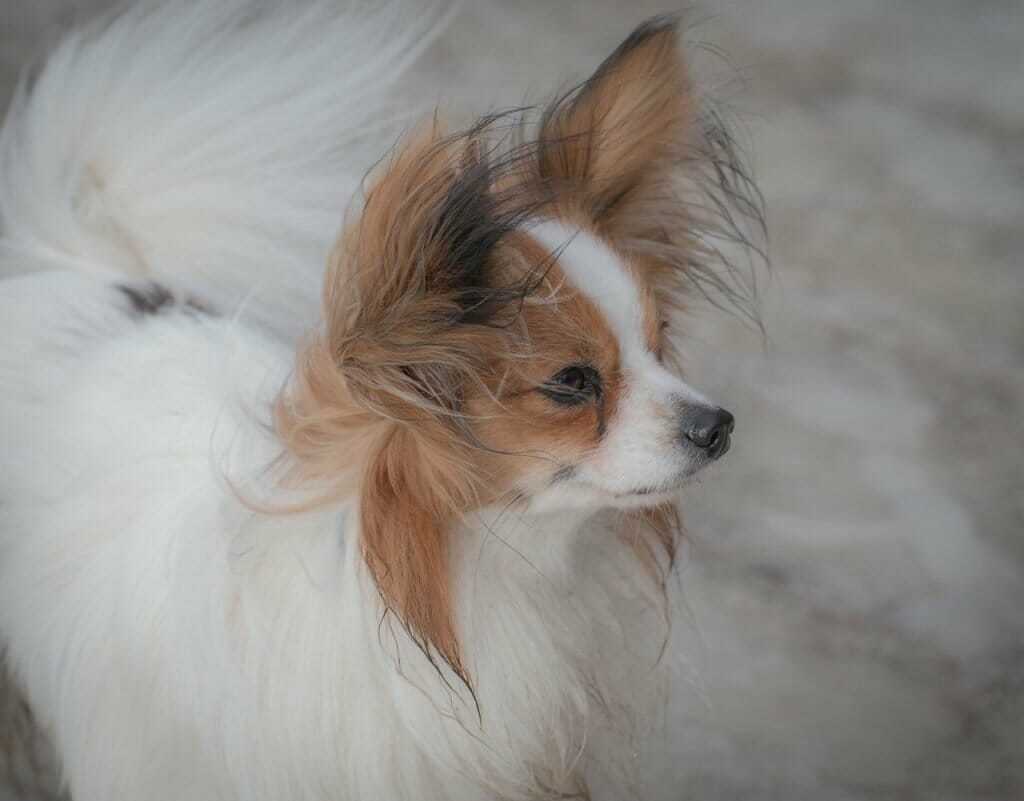 Tiny, charming and elegant, with a long flowing coat and tufted butterfly ears, the Papillon dog is a beautiful sight to behold.

That said, Papillons are far from just another pretty face. People-oriented and amiable, they are eminently trainable and generally excel at anything they set out to do. From the show ring to agility to learning new tricks, they have an uncanny ability to quickly master almost any task. And they seem to get a real kick out of showing off their skills. At the same time, they are also wonderful lap dogs, content to snuggle on the couch for hours at a time.

Want to learn more about these petite little powerhouses? Here are a few more fun facts about the Papillon dog.

No. 1. They are one of the smartest dog breeds

Granted, there’s no such thing as an IQ test for dogs. But Professor Stanley Coren, an expert in canine neuropsychology and author of the best-selling book, “The Intelligence of Dogs” did some pretty extensive research to determine which dog breeds learned the fastest and retained knowledge the best. According to WebMd, he reached out to over 200 professional obedience judges and asked them to rate more than 110 breeds. The dog that came in No. 1 was the Border Collie, followed by the Poodle and German Shepherd. The petite little Papillion came in No. 8.

Like all highly intelligent dogs, Papillons need mental stimulation to stay happy and well-behaved. Bored dogs get into all kinds of mischief, and a smart dog like a Pap will figure out how to entertain himself if you don’t give him something to do. One idea: a challenging puzzle toy designed especially for small dogs. 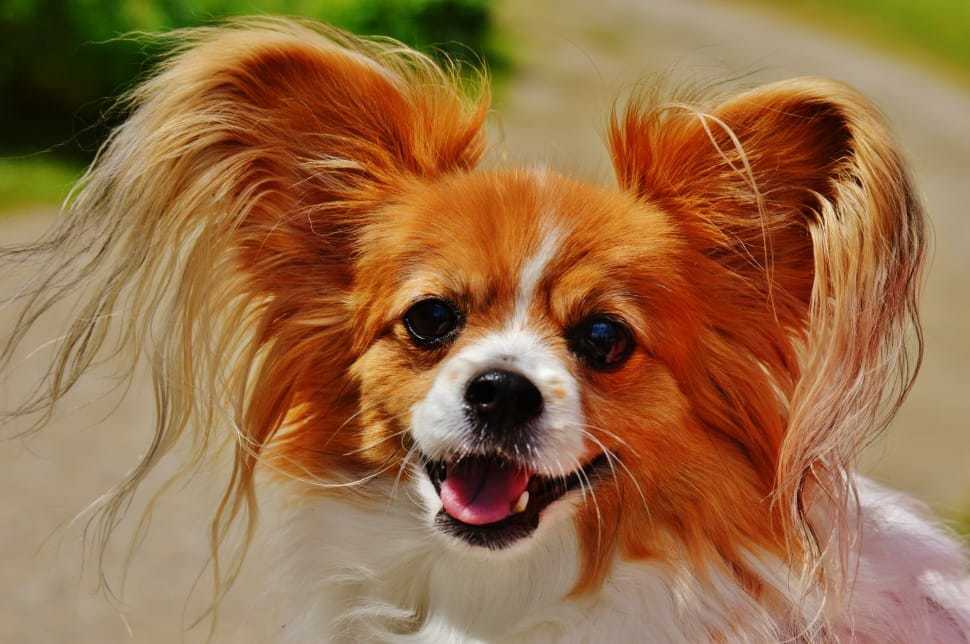 The Papillion is well-known for its intelligence and willingness to take on almost any task.

The Papillion is named for its distinctive butterfly shaped ears (“papillon” means butterfly in French.) So it may come as a surprise that not all Papillon dogs actually have those tufted “bat wing” ears. Although erect ears are generally favored these days, the original Papillons had long, floppy ears. Known as Phalenes (which means “night moth” in French) or Phalene-type Papillons they are identical to the erect-eared variety in every other way, and the two varieties may even be born in the same litter. Additionally, they are registered and shown as the same breed. 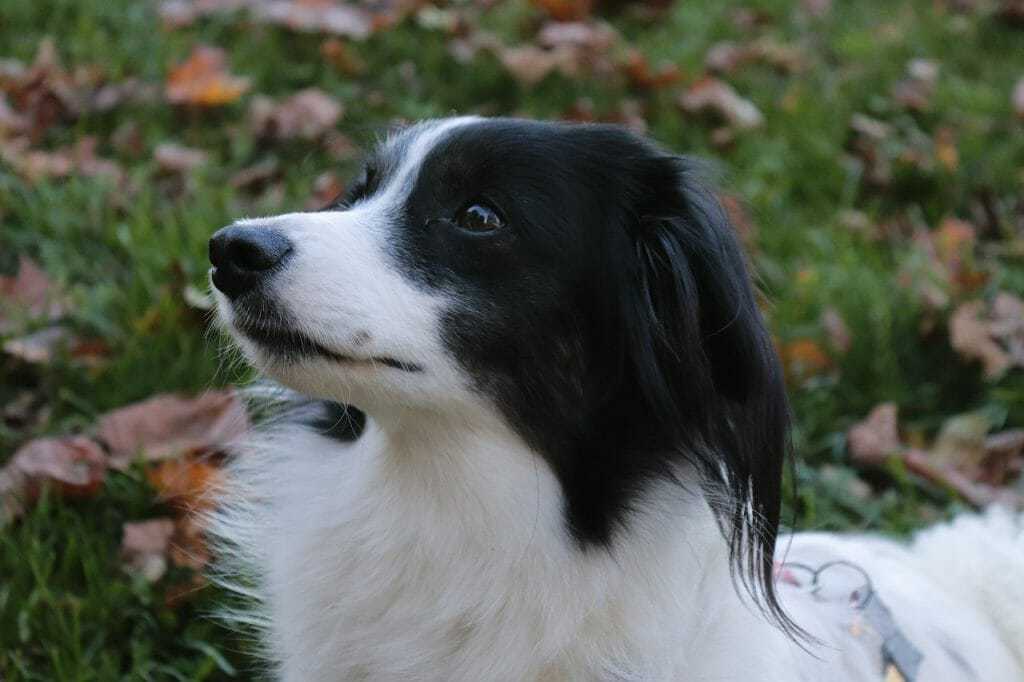 Identical in every other way to its sibling the Papillion, the Phalene has long, floppy ears.

No. 3. They have been around for a long time

The Papillion first appeared during the Renaissance Era, when breeders eager to create miniature companion dogs for the idle rich crossed spaniels with a number of toy breeds. Although they became extremely popular in France, they were first bred in Italy and Spain.

Originally known as “dwarf spaniels” Papillons quickly became a favorite of European aristocrats, including such notables as Louis XIV and Marie Antoinette. Legend has it that Antoinette’s faithful Papillion, Thisbe, lived with the family at the Tuileries Palace when they were held there under house arrest. The dog then reportedly sat patiently outside the Temple Prison where the Queen was confined until her trial and ultimate beheading on October 16, 1793.

No. 4. They make great models

From as early as the 16th century, Papillons have been featured prominently in the paintings of many artists, from the Italian Master known as Titan (also known as Tiziano Vecelli or Tiziano to Vecellio) to France’s François Clouet and Dutch portrait painter Johannes Vermeer. Typically commissioned by European nobility, the paintings usually feature one or more elaborately dressed family members holding a tiny brown and white (or sometimes black and white) dog with floppy ears. 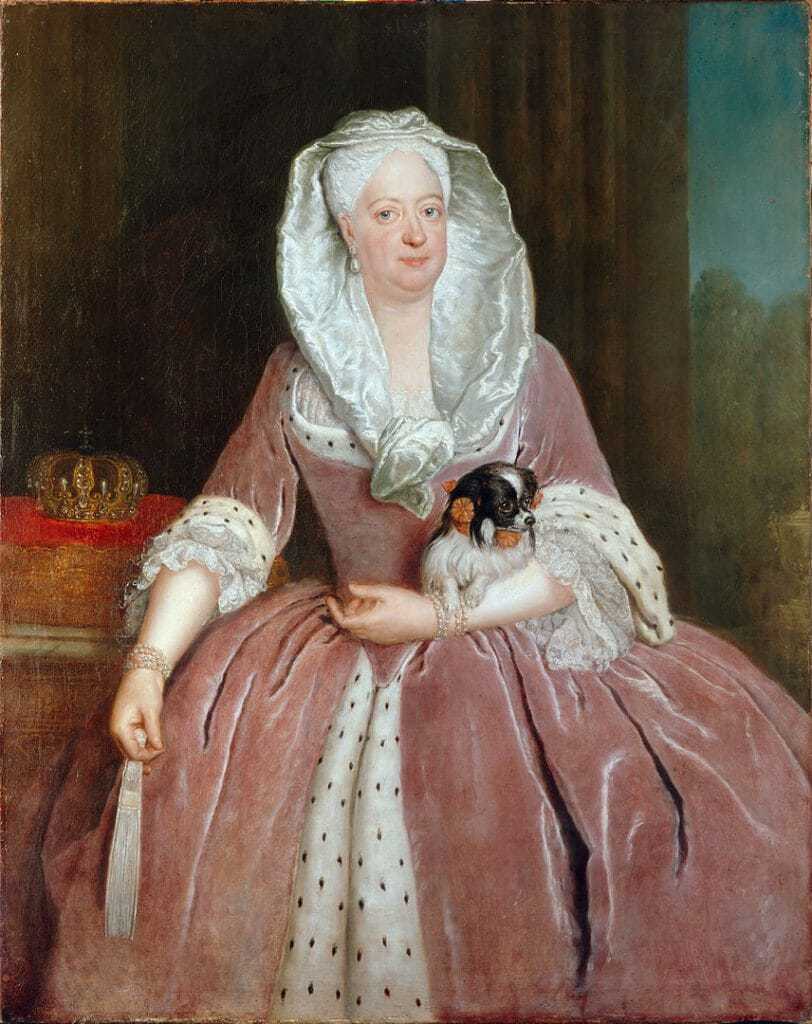 No. 5. They are as playful as they are beautiful

Although long-favored as lap dogs, Papillons are actually a friendly, agile, playful breed. They are also people-pleasers who love nothing more than showing off for their caretakers, whether that means playing a game of fetch or performing a newly learned trick. Their innate desire to please, combined with their high intelligence and spunky nature, also make Papillons a natural at agility and consistently high performers in the show ring. In fact,  a Papillion named Dylan (owned by Kathleen Roosens) walked away with Best in Show at the prestigious 2019 Crufts Dog Show this year.

Want to see an example of a Papillon in action? Watch this little guy playing fetch with his owner on a windy day in Spain. (Warning: You’ll get tired just watching him!)

No. 6. They are good mousers

Papillons are descended from spaniels, who were bred to hunt, flush out, and capture prey. And while today’s Papillons are a bit far removed from their ancestors of old, they still have a lot of spaniel DNA and the prey drive that goes with it. And while even the spunkiest of Paps is too small to flush out game birds in the field (though they might try!) they make darn good mousers in the home.

No. 7. They are great with kids

Small dogs and children aren’t always a good combination, but in the case of the Papillion, nothing could be further from the truth. Unlike some toy breeds, Paps are quite tolerant of children’s antics and are generally good with cats and other dogs as well. In fact, their natural friendliness typically lets them bond with other animals quite easily — a plus if you have other pets.

With that said, it’s important to keep in mind that Papillons are completely unaware of how small and delicate they are. What’s more, young children may take the dog’s fearlessness to mean it’s OK to play a little rougher than is wise. So it’s very important to make sure an adult is present to supervise any interactions between your Pap and little kids.

Papillons typically don’t like the water, but that doesn’t mean they won’t join you for a day at the beach. This little guy obviously had some fun playing in the sand.

No. 8 They are hardy and adaptable

Despite their delicate appearance and tiny size, Papillons are quite hardy and adaptable dogs. They are tolerant of both heat and cold (although a sweater in frigid temperatures is usually a good idea) and they are just as at home in a tiny apartment in the city as on a sprawling 100-acre farm. They have amazing exercise tolerance too, and are quite happy taking long walks or romping in the park with a bunch of kids.

Papillons are prone to a few health problems, including patellar luxation (dislocated kneecaps) and seizures, according to PetMD. Additionally, some dogs have a condition called open fontanel, in which the bones of the skull never completely fuse, leaving a “soft spot” at the crown of the head. (This is just like the soft spot on a baby’s skull.) While not inherently dangerous, the condition does leave the dog more susceptible to head injuries, so you will need to take extra care to keep him safe.

Although we in the United States know them as Papillons, the little butterfly-eared dog has quite a few other names. In Europe, they are known as the Continental Toy Spaniel, or the  Epagneul Nain Continental (Continental Dwarf Spaniel). They’re also sometimes referred to as Squirrel Spaniels or Squirrel Dogs (presumably because of their diminutive size and squirrel-like tails.)They’re also called  Butterfly Spaniels and Dwarf Spaniels, depending on where you are and whom you are speaking to. 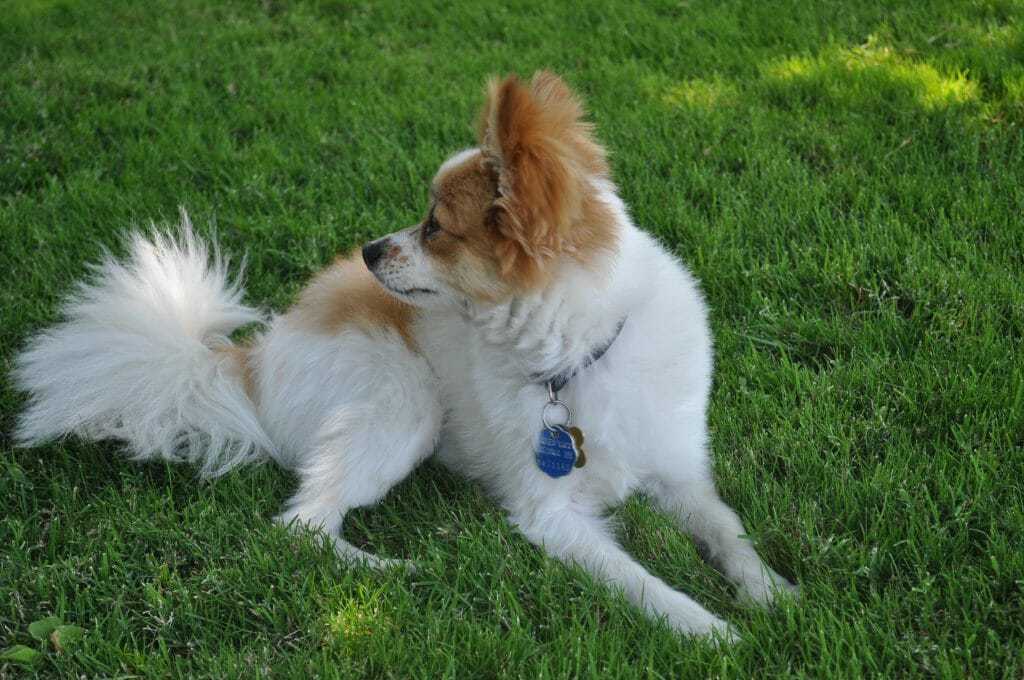 Papillons are sometimes called “Squirrel dogs,” probably because of their tiny size and bushy, squirrel-like tail.

No. 10. They need surprisingly little grooming

Despite their prima-donna appearance, Papillons need very little grooming to stay looking their best. Their long hair is more like human hair than fur, and since they are a single-coated breeds, they don’t usually develop mats. Brushing with a good slicker brush once or twice a week is generally all that’s needed to keep their coats shiny, and they don’t need to be bathed more than once a month or so. That said, you may need to pay a little closer attention to the tufted hair around the dog’s ears, which can attract a lot of debris, especially if he is playing outdoors.

Charming, energetic, and incredibly smart, the Papillon dog may be one of the most versatile of all the toy breed dogs. Never temperamental, they are easy-going and affectionate, and bond easily with children and other pets. Add to that their low-maintenance good looks and eagerness to please, and it’s easy to see why they have been such a popular  breed for so many years. Whether you are looking for a show dog, a walking companion, or a fun-loving family pet, it’s almost a certainty that a Papillion will fit the bill. 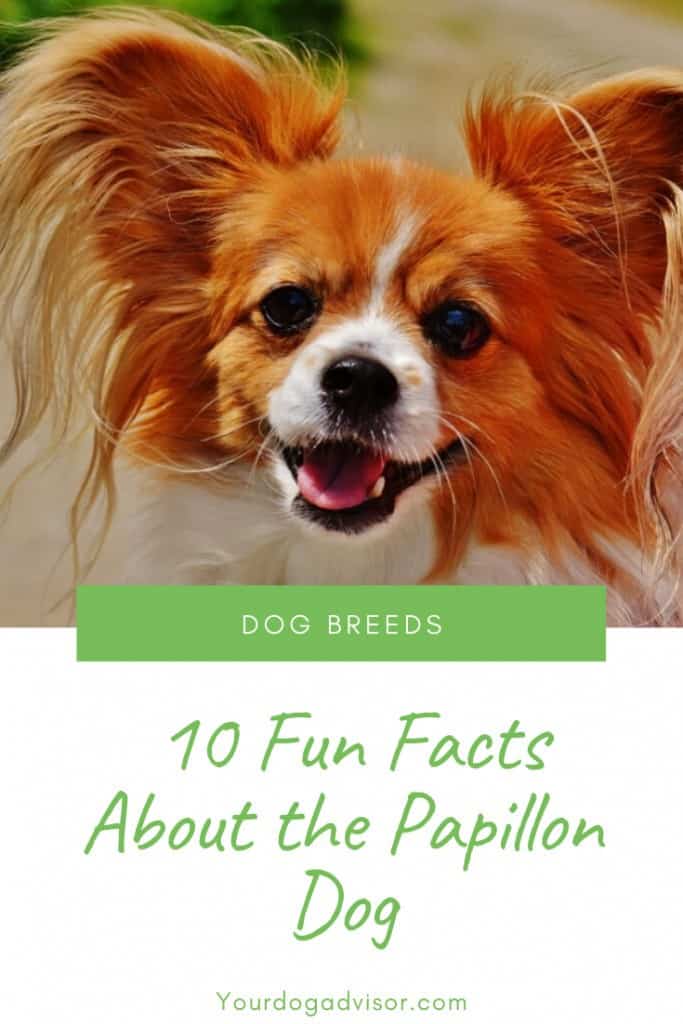