There are many words you could use to describe the English Mastiff, and most of them have to do with size: humongous, gargantuan, immense, and colossal all come to mind.

But that obvious physical feature is just the start of what you need to know about the this breed if you’re looking to add one to your household sometime soon.

They’re also sweet, loving droolers with an extraordinary history who love to hang out with their people and are content to sleep a significant portion of the day.

Here are 16 things you need to know about this amazing breed.

While they’re not the tallest dogs on record (that particular spot belongs to the Great Danes), they are the heaviest. The heaviest dog on record anywhere in the world is an English Mastiff named Zorba, who tipped the scales at 343 pounds. The official AKC standard for the breed is 160-230 pounds for males and 120-170 pounds for females. For comparison, the average man weighs just under 200 pounds, making the Mastiff larger than most of the people that own them. 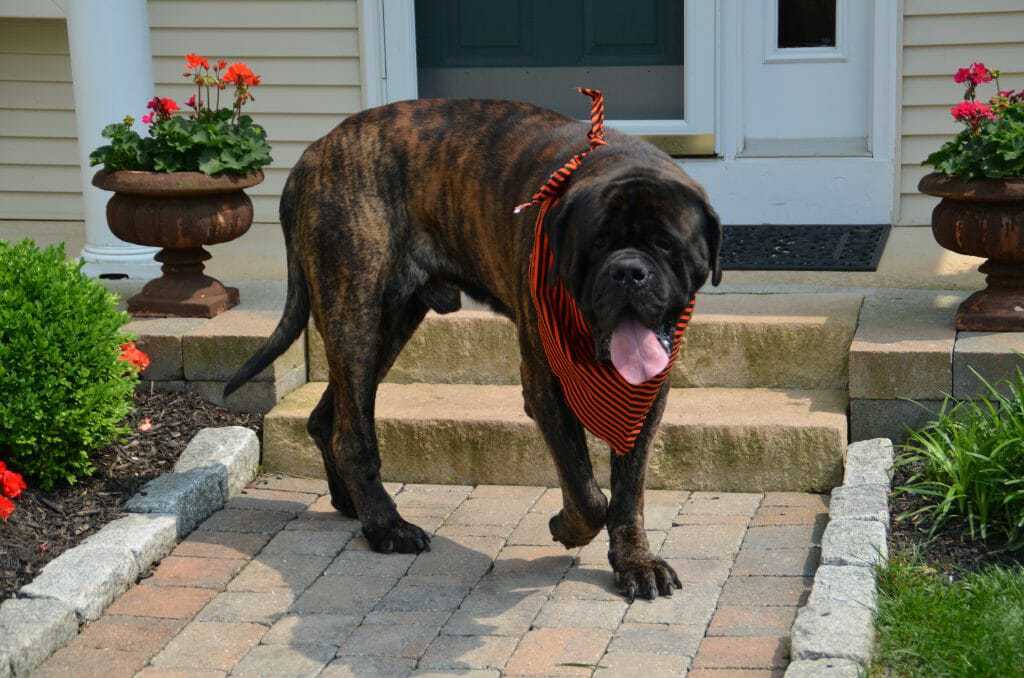 Zaenne (pronounced “Zane”) is four years old and weighs about 200 pounds. His owner believes that he will likely has another 50 pounds to go before he is done growing as his father was around 250 pounds. Note the size of his paw compared to the bricks in the walk, and how he almost comes up to the tops of the flowers in the planters.

They need extra care when they’re young because they grow so much so fast.

The fact that they grow to be so large is something any potential Mastiff owner must keep in mind when they are first attracted to that cute little puppy. By the time that adorable little pup is six months old, he will likely already weigh between 75-95 pounds – and that’s still only half grown. They are finally fully grown at 18 months old but don’t typically mentally mature until they’re three years, meaning you can have a 200-pound puppy on your hands for a while. 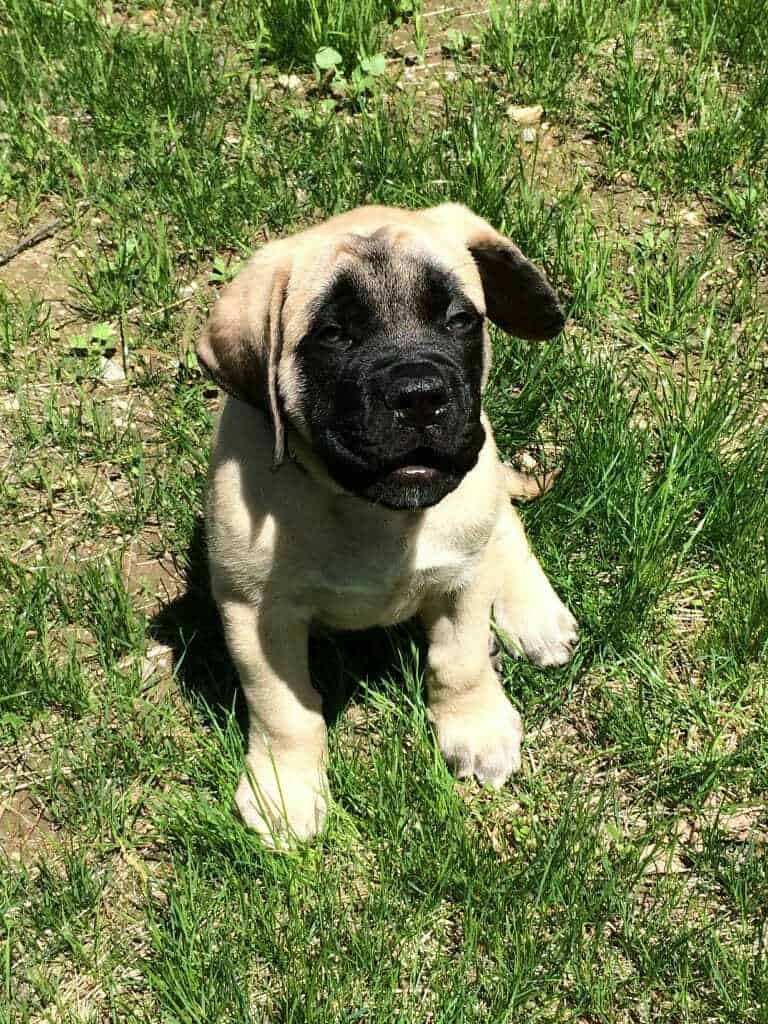 This puppy is small now, but potential owners have to be sure they can handle this little guy after he becomes a whole lot bigger. Grown dogs like Zaenne eat 40 pounds of food every three weeks. Also note the black mask, one of the only markings allowed on AKD-registered English Mastiffs.

The English Mastiff has impressive stats beyond just its massive body.

Because there is much more to the dog than its weight, here are some more notable breed stats.

There are actually four different kinds of Mastiffs.

A dog this impressive can’t be contained to just one type! The four different types are Bullmastiff, Neopolitan, English (also just called Mastiff), and Tibetan. Generaly speaking, they look similar to one another and all are large dogs, but a closer look at each will help you realize that there are distinct differences between them.

There are three AKC-accepted colors for the breed: apricot, brindle, and fawn. The AKC also allows one marking on a Mastiff’s face, a black mask. They are not allowed to have excessive white coloring on their chest or any white coloring anywhere else. They have wrinkles on their faces, large feet with black claws, and eyes that are not too prominent on their faces. 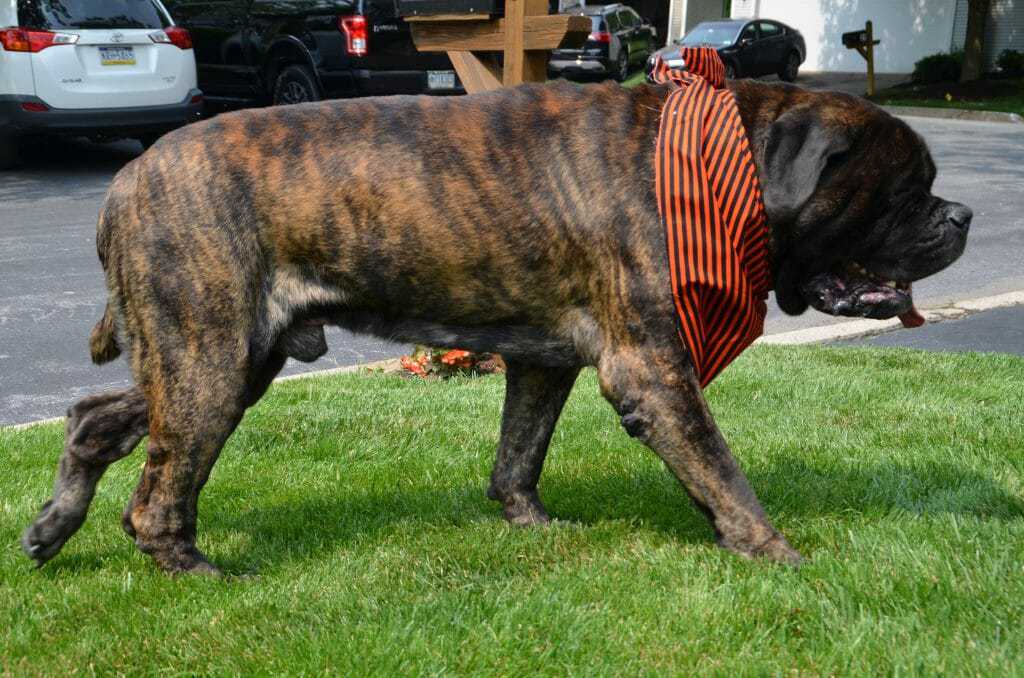 The brindle fur is stunning on Zaenne. There are two other official colors are apricot and fawn.

The right food and feeding schedule are especially important for this large breed.

Because they are so large, owners have to be really careful about nutrition and caring for their rapidly growing dog. Mastiffs can be susceptible to skeletal disorders if they’re not fed the right food in the right amounts. They should be fed on a schedule instead of free-feeding, and the food should be rich in nutrients, not fillers. As they get older, these dogs should be fed based on their size, age, and activity level.

They have a history almost as impressive as their size.

The breed is one of the older ones in the world and dates back thousands of years. There is evidence of a large breed dog resembling the Mastiff throughout parts of Europe and Asia. Legend says that Julius Caesar saw the dogs, was very impressed by them, and brought them to Rome to battle people and other large animals in arenas.

The breed we know today were also referenced in Canterbury Tales; Chaucer called them “Alaunts.” They were huge and used to hunt game. Some even fought alongside British soldiers in battle. Much later, in 1885, they were formally recognized by the AKC after having made their way to the United States. 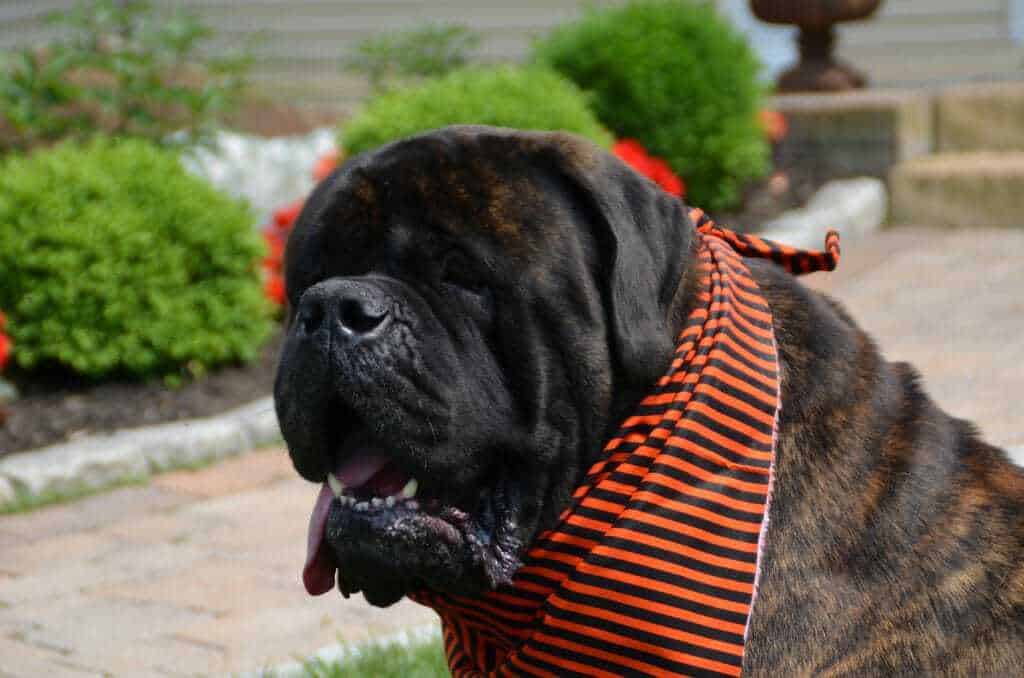 It’s hard to tell from this picture, but the breed was once known for being hunters and fighters, almost back to their origins in Europe and Asia thousands of years ago. Today members of the breed are more known for sleeping then fighting. Zaenne’s owner says that when he lies down and starts to snore, the whole floor vibrates!

They were almost wiped out in WWII.

Despite their popularity and appeal, the breed’s population decreased in the early 1900s in Britain where it was considered unpatriotic to keep a dog that ate as much in a day as a soldier. Their numbers continued to become depleted during WWII. It was estimated that by the end of the war, there were only 14 dogs left in England. The Mastiff population was rebuilt with the help of breeders from the United States who exported them.

Mastiffs do surprisingly well in apartments.

Despite its exceptional size, this breed can actually fare well living in an apartment. They don’t bark very much and are naturally very clean. They love to lounge and rest. Their bad habits are drooling and digging, both of which are easily handled in an apartment. However, you will need to make sure that you can deal with a dog that size in your apartment. If you haven’t adequately trained your dog to know where he belongs and where he doesn’t, you run the risk of the dog taking over the smaller space.

They get along well with kids and other animals – with a couple of conditions.

Originally Mastiffs were fighting and hunting dogs, but today their temperament is much calmer and gentler, and it makes them a good companion for small kids and other animals in your house. You should definitely plan on early socialization. It’s critical for all dogs who are going to be around small children, but it’s critical for a dog that’s going to grow to be so big. Owners should also teach children not to annoy the dog or play too rambunctiously with him as this breed doesn’t like to be handled roughly, and train the dog to have a safe place away from the children.

These dogs can treat cats as either prey or best friends, and early socialization with other animals is vital again in making that determination. The breed is generally good with strangers, and not typically aggressive.

You’ll need to watch out for drool.

Most Mastiffs are big droolers. Excessive droolers. You will want to keep a towel or rag handy to wipe off their mouths regularly or you might find pools of it around your house. Interestingly, they won’t drink from a water bowl that has their own drool in it, so you’ll have to make sure that they constantly have clean water to drink.

There are some Mastiffs that are bred to be non-droolers. That’s something that you would have to seek out with specific breeders if it’s an option you want to explore. 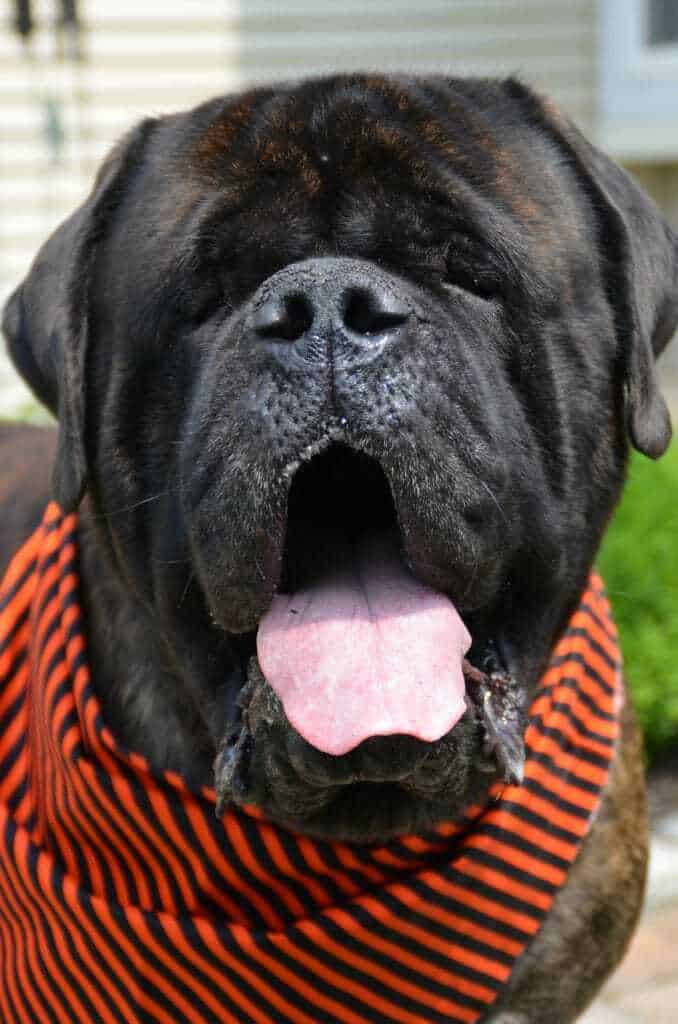 Although Zaenne was bred to be a non-drooling dog, even he is not immune to the heat and the need for water. He had been outside for a good part of the afternoon and was drinking a lot of water. His owner was nearby with a rag so that she could wipe the drool away, a habit all Mastiff owners need to learn.

They are easy to care for on a regular basis.

This breed is one of the easiest to care for in terms of grooming. Their coat is short, and while it does shed heavily during spring and fall, it’s easily kept under control with brushing daily during those times. While you brush the dog, you’ll want to check the wrinkles in their faces to make sure that they’re clean.

There are a few potential health issues with this breed.

Like most breeds, this one has several health issues that can pop up. Large dogs are at risk for bloat, which is where the stomach flips and fill with gas, leaving the dog unable to eat. Other issues for this particular breed include hygromas, which are cushions that protect the elbow joints. They can also have to deal with cancer, joint problems, pica (eating dirt and other things that they shouldn’t), and ear infections. 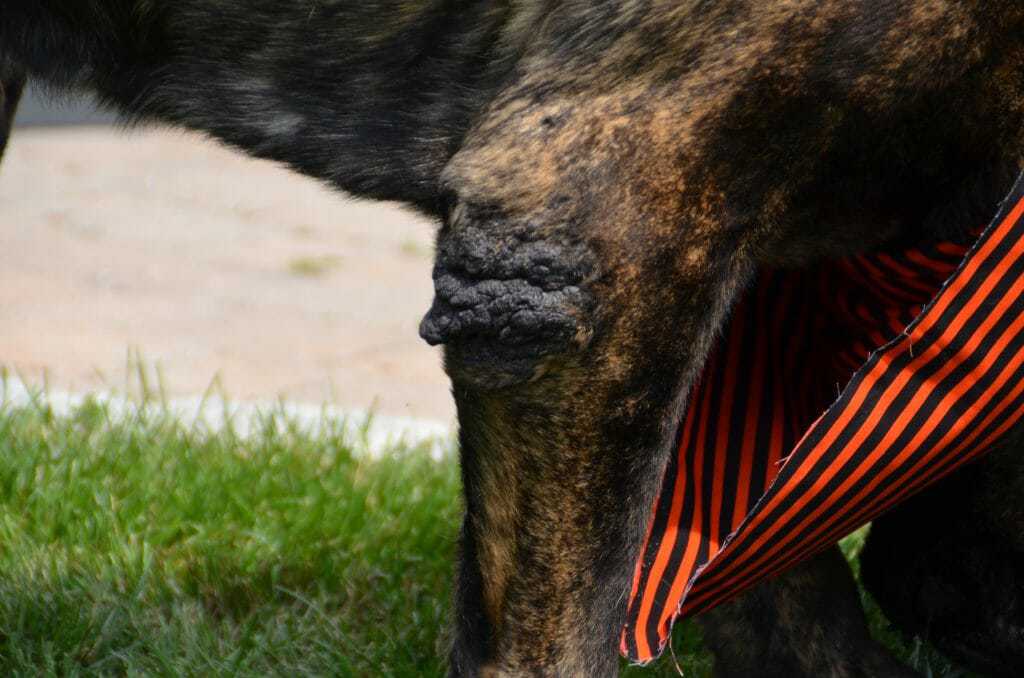 Zaenne has a hygroma on his elbow joint. It looks like rough skin and is nothing to be concerned about, just aware of. It serves to protect his joint when he lies down and his weight rests on it.

They only need a moderate amount of exercise.

This breed can get by on about a mile walk once a day. They don’t need tons of exercise and can get overheated, so you have to be careful not to take them too far. They’re also likely to plop down right where they are and refuse to move when they get tired, so the rule with this dog is not to take them farther than you can carry them – and that’s not very far at all with this huge breed!

It’s imperative to train your Mastiff.

Having a small puppy that won’t follow your commands or stay away from where it shouldn’t go isn’t such a big deal. When your dog is close to 200 pounds and doesn’t listen to your or obey you? Well, that’s a much bigger problem.

It’s cute and non-intrusive when you let a puppy sleep on your bed, but sharing your bed with a Mastiff is like sharing it with another person. Are you prepared for that? It’s cute when a puppy jumps to put his front paws on you to welcome you home, but having a huge dog do that can cause serious injury. Training early and diligently is key to having a dog with no behavior issues later on.

Although this is a short clip, you can get a feel for how it feels to have this large dog come trotting toward you. Zaenne has been intensely trained and can even be walked on a leash by the owners’ seven-year-old daughter. He is in control in this clip, but you can imagine how it would be if he were out of control and running towards someone.

Over the years, many celebrities have owned the breed. Those people include Bob Dylan, movie director Michael Bay, Marlon Brando, Oprah’s BFF Gayle King, Dwayne “The Rock” Johnson, and Bon Jovi. If you decide to own a Mastiff, you’ll be in great company! 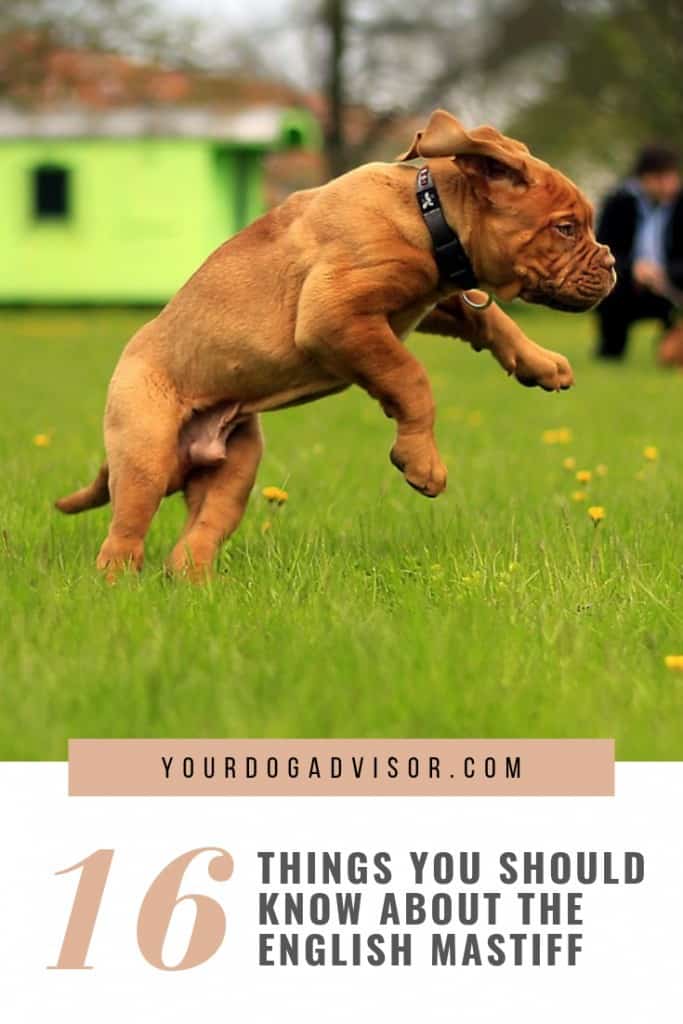