The boxer beagle mix, otherwise known as the boggle, bogle, or boxel, is the perfect combo of fun-loving, athletic, loyal, and sharp on their noses.

Not only are they a great family dog, but their mixed breed qualities mean less health problems and more smarts.

Mixed breeds are less predictable in their size, colors, and characteristics, however, so here’s what you need to know. 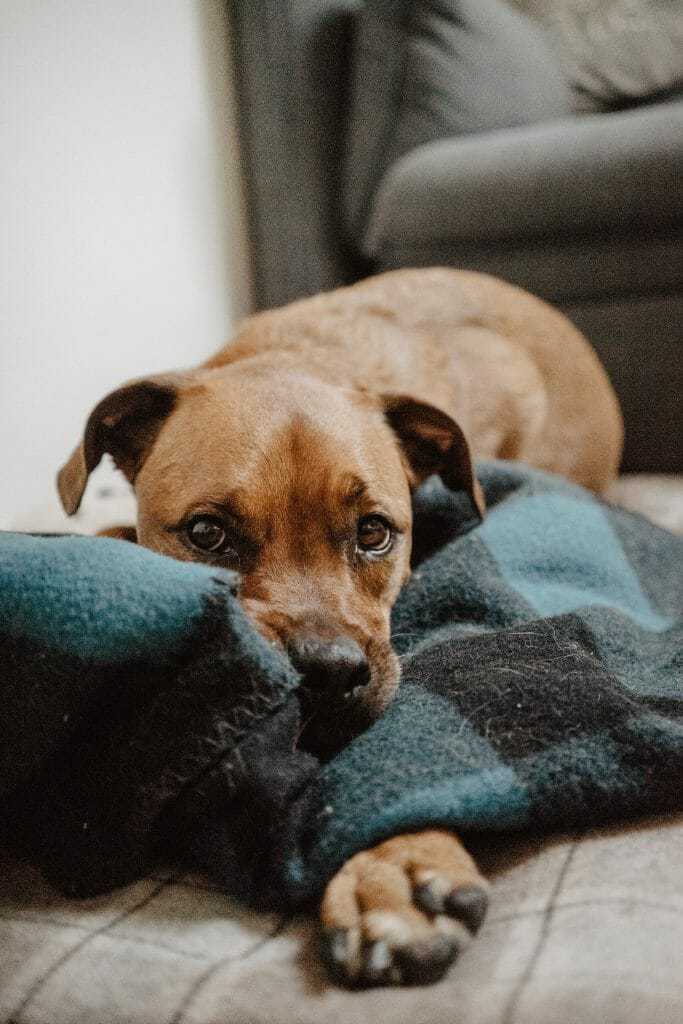 The boggle dog will want to spend every waking minute with its loving owner. You can take them on all your family trips but be weary leaving your dog in the heat. Boxels have a higher chance of heat stroke than your average canine.

The Boxer-Beagle mix originated in the USA in the late 1990s to early 2000s. These dogs are designer breeds, meaning they’re a mix of two purebreds.

Even though this mix is more current, its parents have been around for thousands of years. 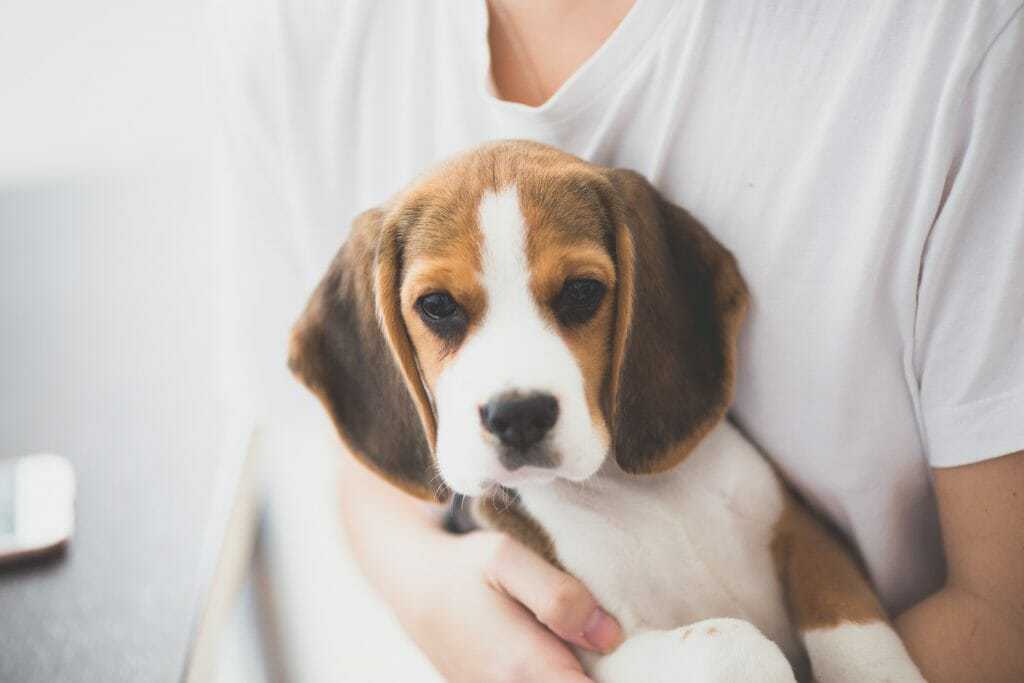 Beagles aren’t just known for the classic Charlie Brown character, Snoopy. They have an incredible sense of smell. So much so, that the United States Government of Homeland Security has a “Beagle Brigade,” where these famous canines sniff luggage in airports to prevent contraband from entering the U.S.

The beagle was first recognized in America right around the Civil War, but it’s thought to have originated in Ancient 5th-century Greece, where it was used to hunt small animals.

During the 11th century, William the Conqueror brought the beagle to England, and in 1884, General Richard Rowett brought the breed to America where it became popular with hunters and families.

The name “beagle” is thought to come from the Gaelic word ‘beag,’ meaning little. However, some believe it comes from the French word ‘Begueule,’ meaning gaped throat– perfectly describing the Beagle’s famous howl.

Located in the hound group, they’re known for their amazing tracking skills, as their noses contain up to 220 million scent receptors. Humans only have 5 million if that gives you any idea! Besides their love to hunt, their loyalty, family companionship, as well as friendliness makes them an excellent breed.

To this day, they’re still popular family dogs. So much so, that The American Kennel Club named them #6 on their most popular dog breed list of 2018, and we named them #8 of the 50 Most Popular Dog Breeds in the World. 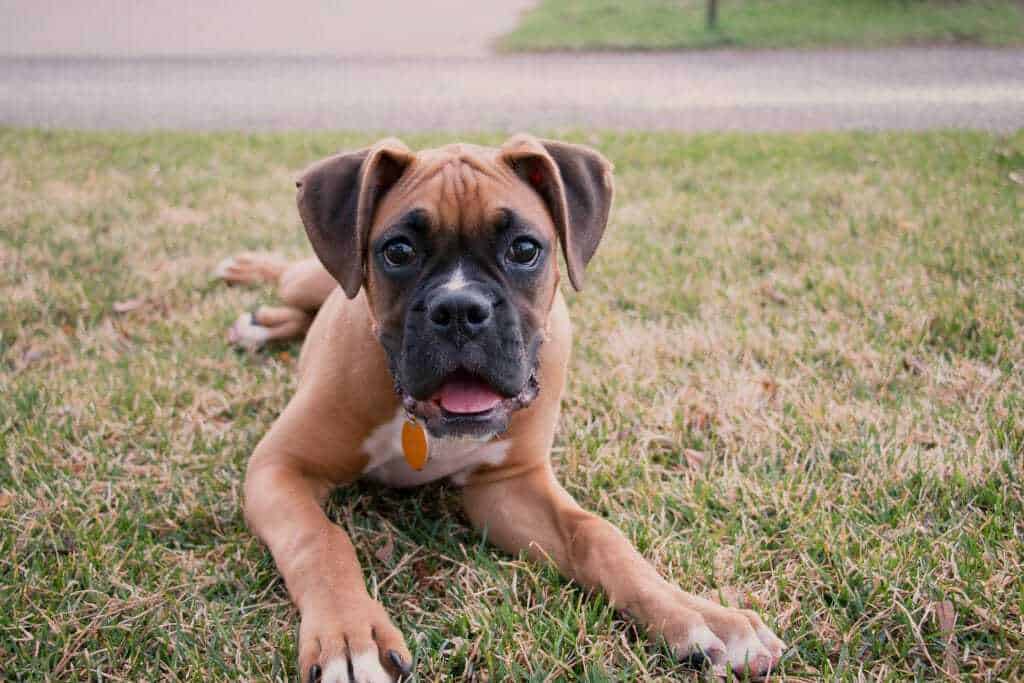 Boxers have an unusually shaped head– but it served them a purpose back in their hunting days. Along with superiorly strong teeth and jaws, their snouts are supposed to be half the length of their skull, making it easy for them to catch prey in their mouth, hold onto it until their owner arrived, and breathe through their nose the entire time.

The boxer is thought to have been around for even longer than the Beagle, dating back to around 2500 B.C.E as war dogs in the Assyrian Empire. However the modern versions we know today were first noticed in Munich in 1895.

As direct descendants of the extinct German Bullenbeissers, a Tibetan line of mastiffs, they arrived in the U.S. in the early 1900s. They were primarily used for hunting large dangerous animals, like bears. But eventually, they were bred for family life and used as guard dogs.

Their name comes from their signature paw movement whenever they play or fight. And it looks just as it sounds– they’re practically boxing!

Located in the working dog group, The American Kennel Club names them #11 on their most popular dog breed list of 2018, as they’re known for their athleticism, loyalty, playfulness, and energy. They’re coincidentally right next to the beagle at #9 on our list of the 50 Most Popular Dog Breeds in the World.

Because boggles are a mix of both small and large dog breeding, their size difference is hugely varied. Overall you can expect your bogle to be between 13-30 inches in height and 20-80 pounds in weight..

Most often though, they range from 50-60 pounds and are between 23-30 inches tall– perfectly resembling a medium-sized dog.

3. They Have a Good Lifespan

Bogle mixes can live up to 12-15 years, which directly correlates with their medium size and fewer health problems as a mixed breed.

As with any cross breed, temperament can vary between which dominant traits he’s received. But it’s more likely you’ll get an energetic, affectionate, playful, and loyal dog companion.

At the end of the day, these dogs are great for families with older children, but may not be well suited for those with young children as they can get easily annoyed with young, jumpy kids. However, if you raise your boggle puppy and young children together, they will respond much better. 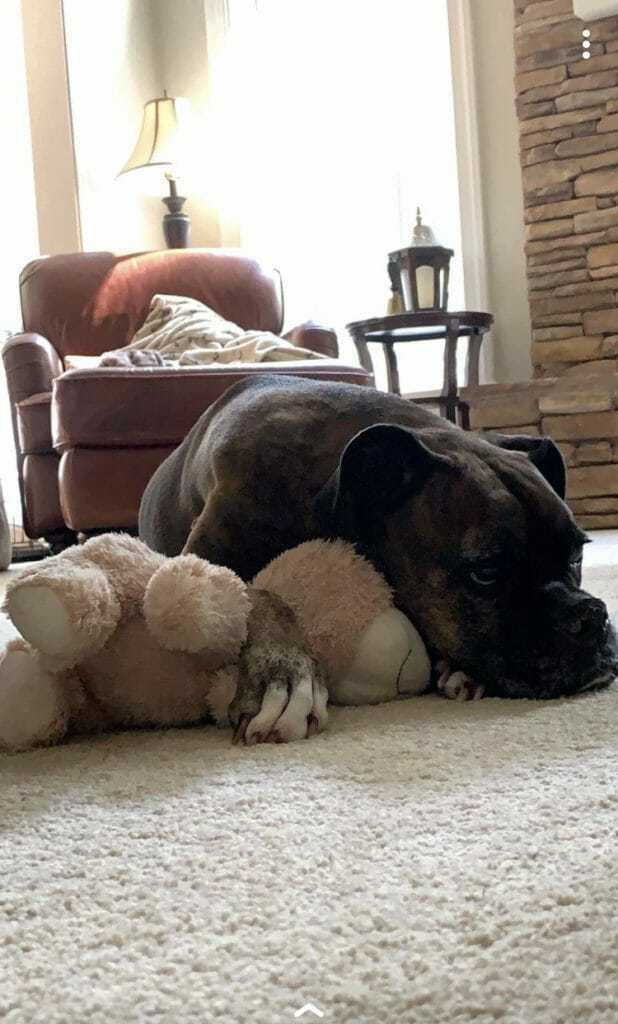 Boggles are GREAT with children they grow up with. But just as our Boxer, Levi, is, they’re not so great around young children who can easily scare them, jump on them, and play aggressively– especially in their old age.

Both the boxer and beagle are intelligent animals, which means training your bogle mix will be easier than most.

It’s important to socialize puppies from a young age to avoid having problems with people later in life. Use positive reinforcement, as these dogs are natural people-pleasers and don’t respond well to harsh training. They are known to jump upon greeting, but it’s nothing you can’t fix.

You might also find it a good idea to train your dog to fetch, as his beagle nose makes him a natural at tracking.

Boggles are healthier just with the fact that they’re a mixed breed, although you can expect similar health issues that their purebred parents deal with.

But if properly cared for, these dogs should reach maximum life expectancy.

They should be brushed once every 1 or 2 weeks and bathed with sensitive shampoo every few months as to not disrupt the natural oils of their coat.

To avoid ear infections, keep their ears dry after baths and try to clean weekly. Nail trimming can be once a month, while brushing your boggle’s teeth once a week. 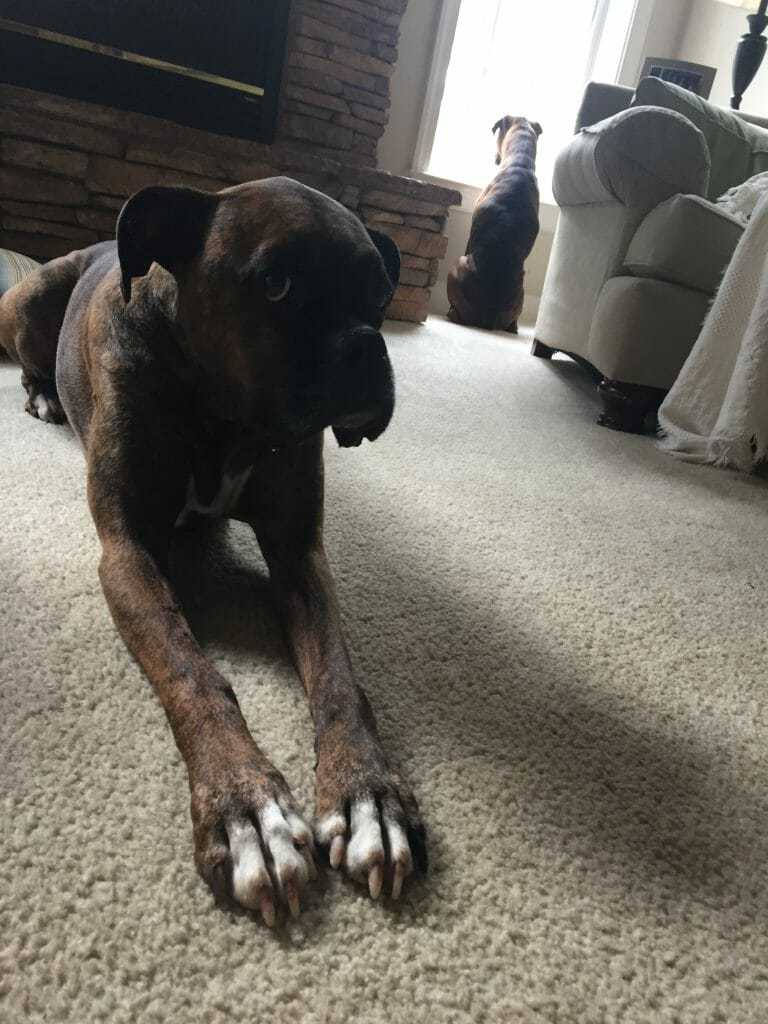 As you can see, boxers have very short, fine hair. Don’t let that fool you though. They can shed quite a bit sometimes, and their darker fur makes it even more noticeable. Be prepared to brush your boxel and be aware that their coat can get quite oily at times.

These dogs are very active, so it’s important to make sure they have a high-protein diet with adequate amounts of carbohydrates.

Talk to your vet about either making your own food at home or finding the right brand that suits your Boxel’s needs. Beagles can be prone to obesity, so make sure to regularly watch food intake and weight.

Boggle’s typically run between $300-$700, which is on the cheaper side compared to dogs like Saint Bernards and Rottweilers who run up to $1500.

They should get around 45 minutes to an hour of activity, either through going for a run/walk, running in the dog park, or playing a quality game of fetch. You can also put them in sports like agility, flyball, hiking, and dock jumping to get any extra energy out.

Boggles also need adequate amounts of brain stimulation through games like treasure hunts and find the treat in the kong. It caters to their natural tracking abilities and love of chasing! 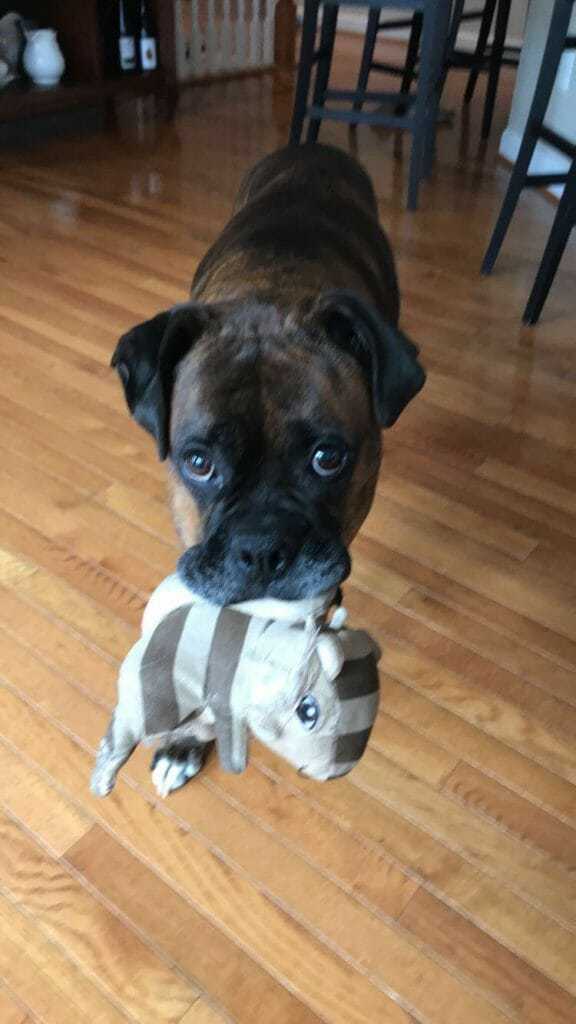 Even though our boxer, Sophie, is close to going on ten years old, she STILL acts like a 1 year-old puppy. Between playing fetch, running up and down our hill, and bounding down the stairs, her energy levels will probably never fade. It’s just in her blood! You can expect your boggle to be similar.

It’s rare to find purebreds in shelters since they seem to be more sought after. But since boggles are mixed breeds, you’re more likely to find them sitting in a shelter waiting to find their forever home.

So before you go looking from a breeder, check your local shelter. You may just find one!

Boggles are known to be quite hysterical in their everyday life. Their playful and energetic personality means lots of laughs and fun for everyone. If anything, these funny compilation videos of their parents say something!

Because of their athletic, powerful boxer heritage, boxels make for some great watchdogs. Even though they might be smaller than your typical watchdog, they’ll be the first to let you know of any possible signs of danger.

This does mean they tend to bark harshly at strangers entering the house, but again, nothing you can’t fix with some training.

14. They’re Not Suited for Apartment Living

Because of their energy, boxels are better off suited living in a large, fenced yard in order for them to live to their full potential. This also means they can get adequate amounts of exercise without you having to put in huge amounts of effort.

Their size is usually on the larger side as well, which means they’re either just right on the edge of the spectrum, or they’re just too big for many apartment requirements. And because they’re a mixed breed, it’s hard to tell exactly how big they’re going to get. 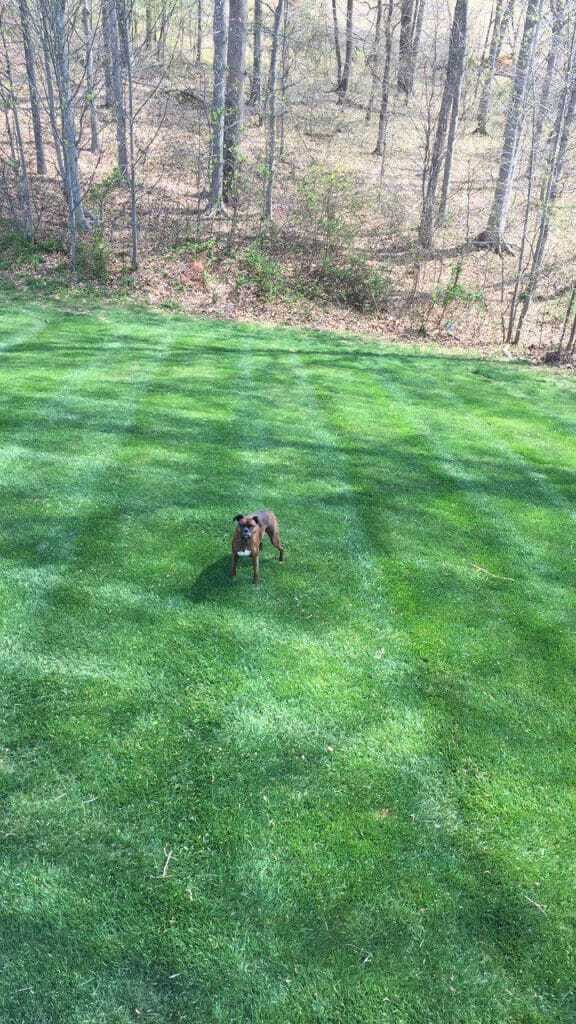 Our boxers absolutely NEED a large backyard to enjoy life. Not only is it great for me when I don’t have time to go for a walk, but it’s a great place for them to run around and play off-leash. They just have so much energy. Be kind to your boggles!

15. They Come in All Different Types of Colors and Shapes

Boxers and beagles both have a wide variety of coat colors, which means you can find boggles with fawn, brown, and even part/tri colors like black and tan, black and white, and brown and black coats. Finding a specific color may be hard, as you’ll need to contact multiple breeders.

Their shape will vary greatly as well. Boxers are more muscular whereas beagles are leaner, so your boggle could look more or less like each depending on the traits he receives. But usually, you can find them with broad chests, short and muscular legs, a long tail, and long, droopy ears.

At the end of the day, the beagle-boxer mix is perfect for outdoorsy and active families. Not only will they happily join you on your family adventures, but they’ll do their absolute best to keep you safe and happy. 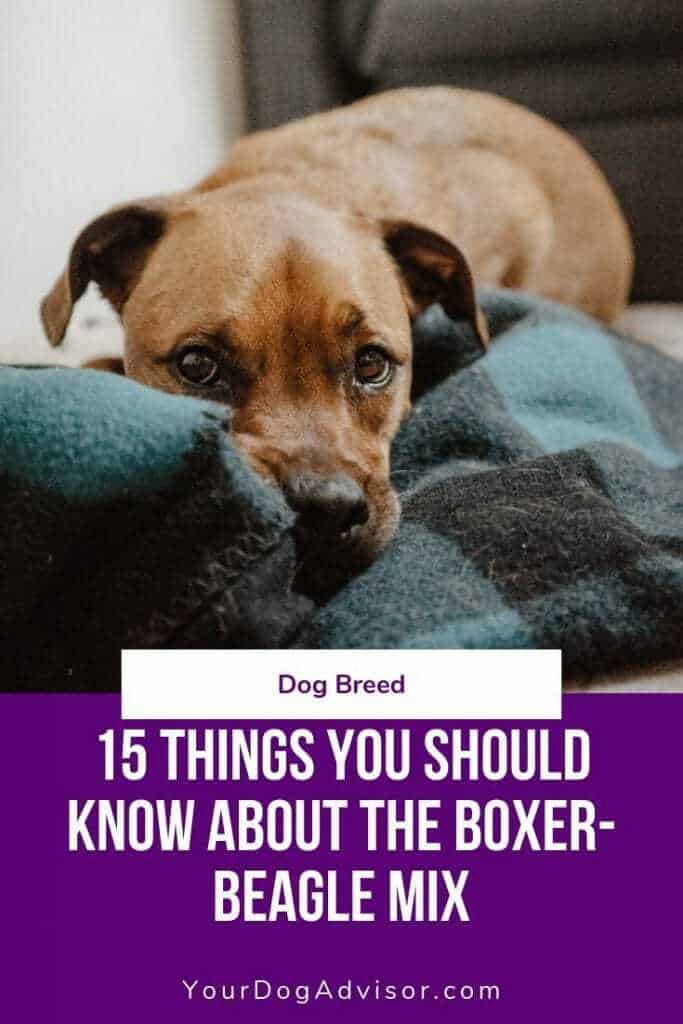