Standing at nearly 30 inches tall, the Akita is one of the largest dogs in the Spitz family. Hailing from the mountainous regions of Northern Japan, the Akitas have seen the rise and fall of many dynasties over hundreds of years. While powerful and strong, the Akita is perhaps best known for their loyalty.

One of the most famous Akitas in the world is Hachiko. Born in 1923, this Akita was the beloved pet of Hidesaburou Ueno, a professor at Tokyo Imperial University. Inseparable, Hachiko accompanied him to the train station every morning, where he commuted for work; at the end of the day, he would also return to the same spot to greet his master, after which they would walk home together. Ultimately, the pair continued this daily routine for over a year, until Ueno unexpectedly passed away in 1925.

Hoping to see the professor again, Hachiko continued to wait at the station for the next nine years and nine months. Tragically, after many years of waiting in vain, his body was found in 1935. Following his death, his remains were buried beside those of his beloved master in Tokyo. Today, Hachiko continues to live on as a symbol of loyalty. In his memory, a bronze statue has been built at the very spot where he waited for the professor at Shibuya Station. 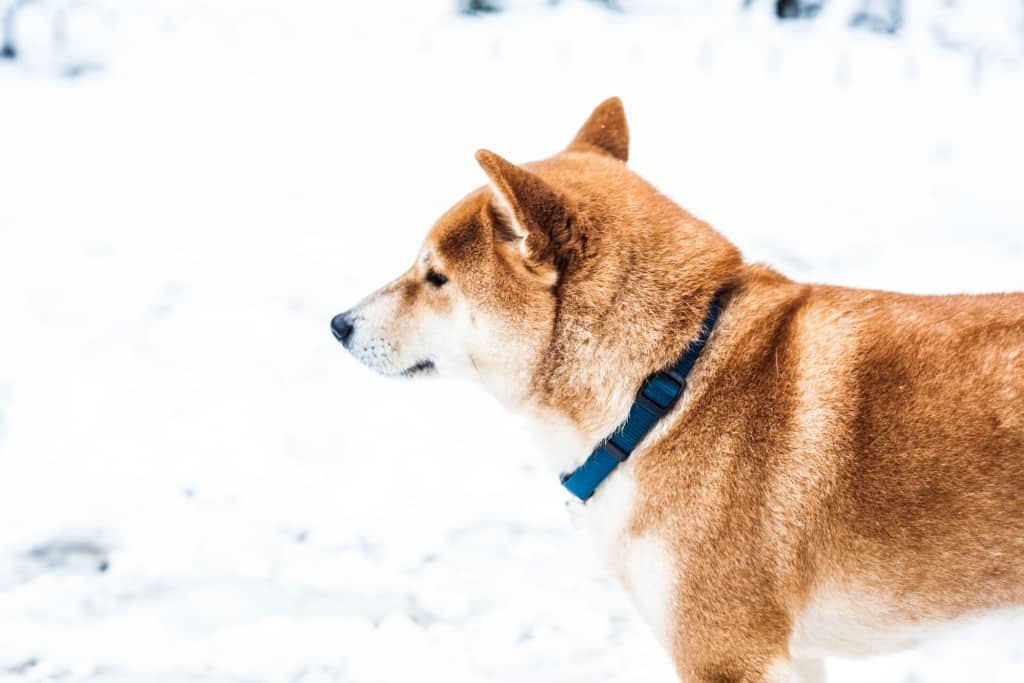 Native to Japan, these large dogs are renowned for their steadfast loyalty. Recognized by the American Kennel Club, the first Akita arrived in the United States in 1937.

As loyal as the Akita may be, however, they are generally not recommended for novice dog owners. In addition to being stubborn, the Akita also has a tendency of being aloof with strangers. When properly trained, however, they can make great family dogs.

Thinking of bringing one of these faithful pups home? If so, it might be in your best interest to read up on the Akita breed first. If anything, you’ll want to familiarize yourself with the unique traits and needs of the Akita breed.

The Japanese dog comes in many colors, including white with red shading.

The Akita in a Nut Shell

Hailing from Northern Japan, the Akita dog is said to have developed in the early 17th century. Initially a hunting dog, they were used by the Emperor of Japan to guard both property and people. In fact, for many years, the breed could only be owned by royalty; it wasn’t until later on that they became more common as household pets.

These dogs are known for being noble and dignified. Cat-like at times, it is not uncommon for them to groom themselves by licking their paws. Generally reserved with strangers, they may not tolerate other dogs—especially those of the same sex.

Highly adaptable, the Akita does well in a variety of living situations.

Barking Tendencies: They are generally quiet dogs; typically, they will not bark unless something is bothering them. At times, however, they do like to converse with their humans, which can be described as a combination of howling, barking and growling.

Apartment Friendly: Despite their large size, the Akita can be kept in apartments if given adequate exercise.

Cat Friendly: Many will tolerate cats, especially if they are introduced at a young age.

Dog Friendly: Bold and dominant, the Akita may exhibit aggressive tendencies towards other dogs.

Nutrition: The Akita should be fed a well-balanced diet to maintain their ideal body weight.

Grooming: Regular brushing once or twice a week is recommended to prevent their thick undercoats from matting. Depending on the dog, baths can be given every few weeks or on an as-needed basis. Brush teeth intermittently.

Training/Trainability: Due to their stubbornness, the Akita may not always listen during training. Consistency is key when working with these dogs.

Known Health Issues / Health Conditions: While generally robust, the Akita is prone to a few health problems including hip dysplasia, sebaceous adenitis, auto-immune disease, and entropion (inverted eyelids). Hip dysplasia is an inherited condition. As with most large breed dogs, they are also susceptible to bloat, which constitutes a medical emergency.

Interested in learning more about the loyal breed? We will be going over 11 different facts below!

1. The Akita Tends to be Aloof with Strangers 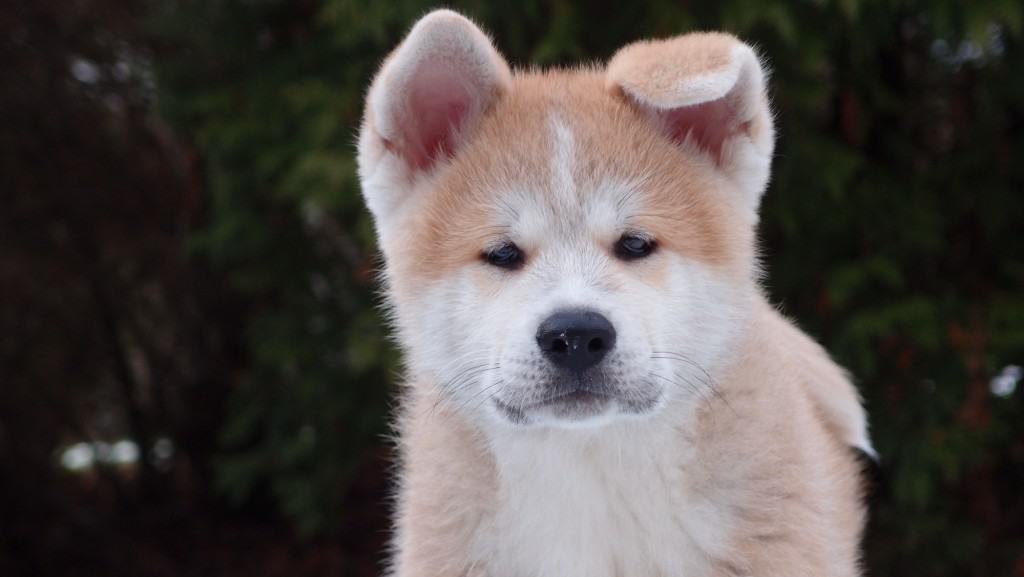 By nature, they tend to be aloof with strangers.

Social dogs, Akitas tend to stick with their human packs. While affectionate with people they know, they are generally aloof and reserved with strangers. Protective by nature, they may even exhibit aggression if they feel that their humans are threatened. Considering this, it is important to properly introduce them to family and friends, especially if they will be entering the family home.  If you want a dog that will get along with everyone, they may not be the ideal breed for you.

2. The Akita is Prone to Dog Aggression

Dominant and strong-willed, Akitas are infamous for being aggressive with other dogs. In particular, they do not mix well with those of the same sex; as such, it’s probably best not to leave two females or two males alone unsupervised (unless you don’t mind coming home to a dog fight). Unfortunately, this means that many will never be “dog park” dogs. Given their large size, it’s easy to see how they can easily inflict injuries with the swing of a paw (especially if the other party is a small dog). With that said, it’s not unheard of for some Akitas to be social butterflies; in the end, it’s down to their individual temperament.

3. The Akita can be Intimidating to Some People 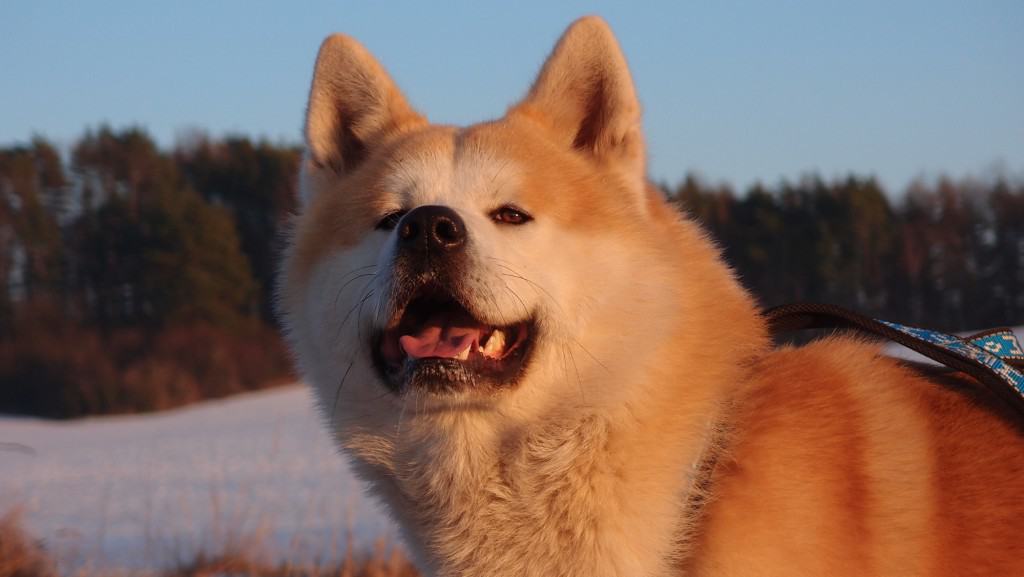 The largest of Japanese Spitz dogs, many of them weigh over 100 pounds. These are large powerful dogs.

Standing at over 2” feet tall, Akitas are anything but small. The Akita has a broad head, thick double coats, with a straight and harsh outer coat and a dense undercoat that sheds twice a year. Given that they were originally used as guard dogs in feudal Japan, it’s not surprising to know that they carry an intimidating presence. After all, it’s not every day that you’d come across such a big dog; standing on their hind legs, they can easily be as tall as some humans! Considering this, it’s no wonder some people are nervous around these giant pups!

4. The Akita Can Get Bored Easily

As with most intelligent dogs, Akitas tend to get bored easily. While they’re not as high energy as say, Border Collies, they do require a good amount of exercise every day. If they’re bored, they will go on a destructive streak—that or they’ll find something fun to do, like escaping from the yard. To prevent such mischiefs from happening, you should always provide them with enough physical and mental stimulation (offering them an array of dog toys doesn’t hurt either). Perhaps you can even introduce them to hiking.

5. The Akita Can Be Willful and Stubborn 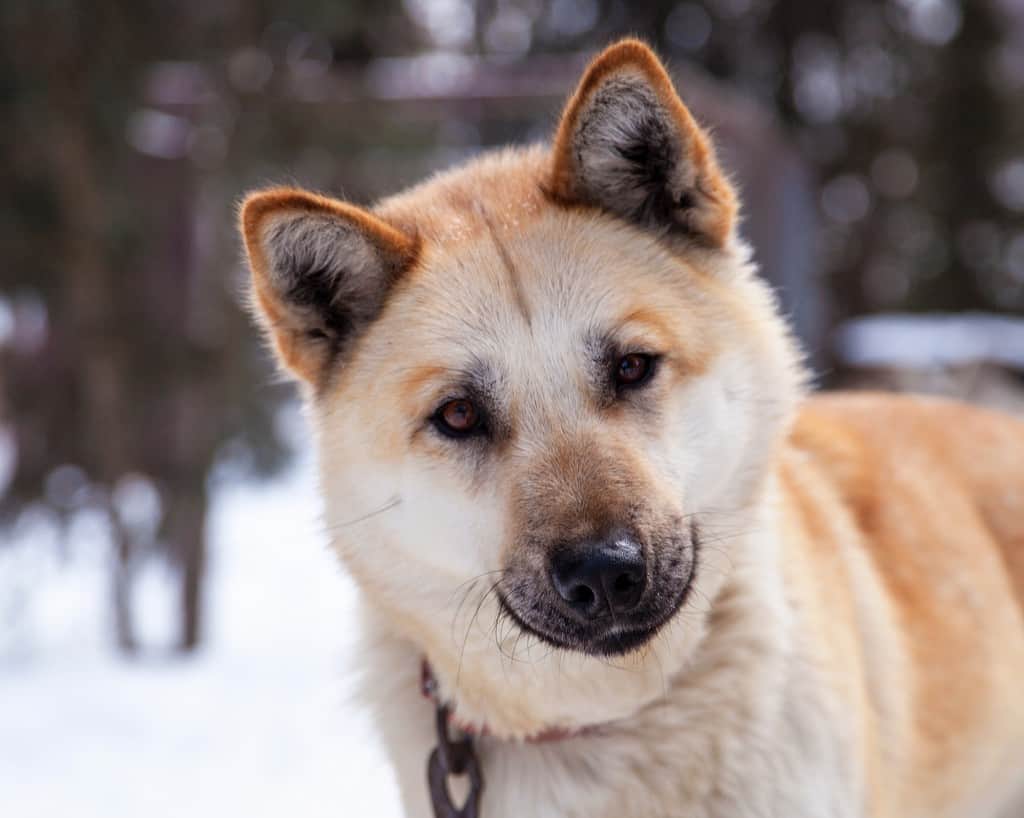 Many Akitas are challenging to train due to their stubbornness.

There’s a reason why Akitas are not recommended for first-time dog owners—they can be stubborn. While intelligent, they are not always willing to obey a command, even if they understand exactly what is being asked of them. Independent in a sense, they are generally not as eager to please compared to other breeds. In fact, many would try to assert their dominance at any opportunity. When it comes to training, consistency is key. If you’re lucky, your pup may even work for food!

6. The Akita Prefers the Cold

Hailing from Northern Japan, it’s almost a given that Akitas prefer the cold—if anything, they love frolicking in the snow. In fact, it’s not uncommon for some not to want to go back inside at all (cue their owners trying to lure them back in). Don’t worry though, they’ll be perfectly fine; these dogs can easily withstand low temperatures—after all, they were bred for cold weather. While they can tolerate warmer climates, it’s easy to see how they’re not a fan of the heat with their thick, double-layered coats.

7. The Akita Shouldn’t Be Trusted Off Leash 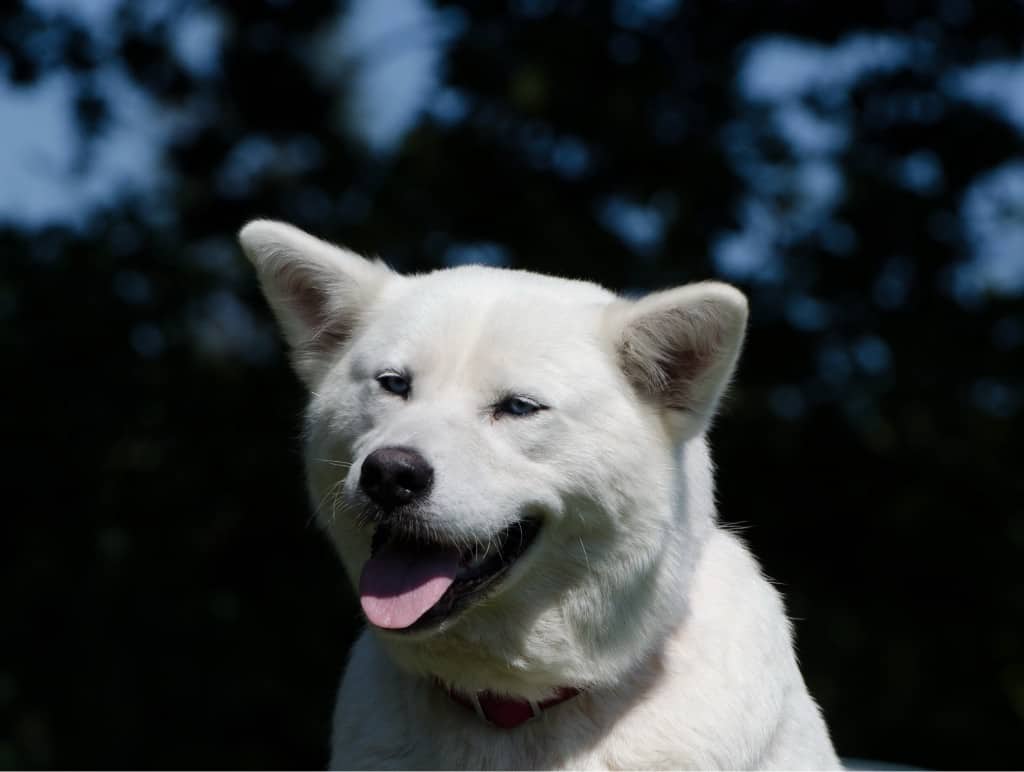 Prey driven, Akitas should only be let off leash in secure, fenced-in areas.

As a general rule, Akitas should not be trusted off leash—unless they are in a secure, fenced-in area. Although it’s possible for them to have great recall, there is always a chance that something will interest them enough to make them run off. Of course, there’s also their high prey drive; powerful hunters, nothing will be able to get in their way from chasing small animals. Couple that with the fact that they’re over 100 pounds, and it seems like a no-brainer!

8. Socialization is Important as the Akita is Prone to Aggression

Socialization is particularly important for Akitas as they are prone to aggression. In general, it’s a good idea to start the process as early as possible—preferably while they’re still in puppyhood. By exposing them to different situations, you’ll ultimately be setting them up for success (in some cases, however, it will not be enough to “override” their natural tendencies). The more they’re socialized, the higher the chance that they’ll be able to get along with others as a well-adjusted dog. Remember, socialization is not just something you do when they’re young; for the best results, it should always be continued throughout their lives.

9. There are Two Different Varieties of the Breed 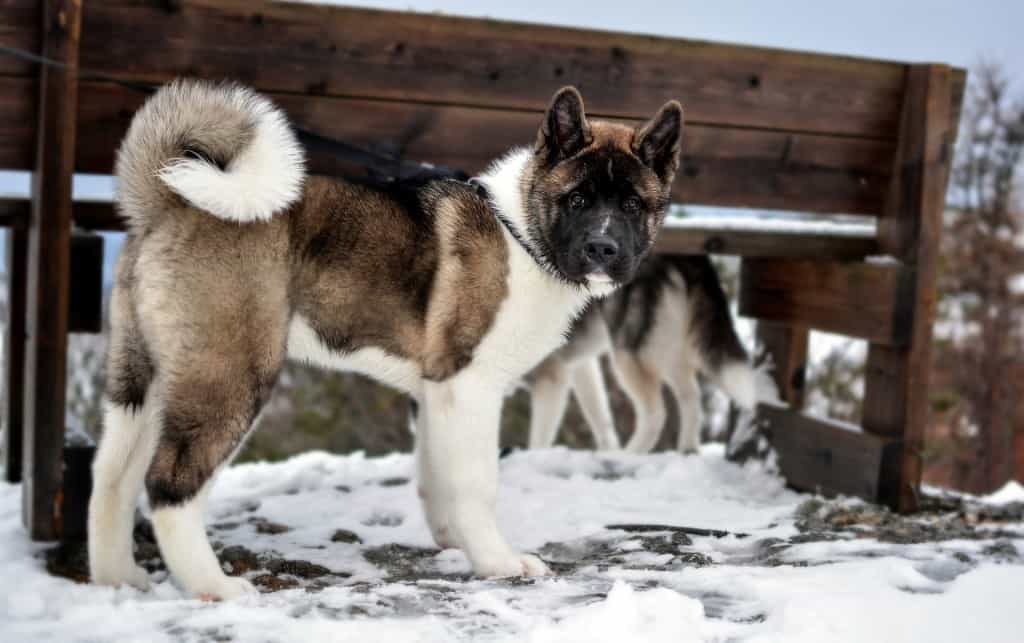 The American Akita is noticeably bigger than their Japanese counterparts.

Did you know that there are two different varieties of Akita? That’s right, there’s the Japanese Akita (Hachiko falls into this category) and the American Akita. While they’re both considered to be the same breed, they have a number of differences, the most obvious being their appearance. To be more specific, the Japanese variety of the Akita only comes in three colours—red, white, and brindle; in contrast, their American counterparts come in a variety of colours and patterns. Not only that, but they are also slightly larger (they can weigh up to 130 pounds) in size. If they were to stand side by side, the Japanese variety of the Akita would come across as noticeably slimmer.

10. The Akita is Typically Quiet

You may be surprised to know that Akitas are relatively quiet. Unlike some breeds, the Akita rarely makes noises unless something is bothering them (e.g., when they are approached by a stranger or another dog). When they do bark, however, it is often loud and commanding (nothing that you wouldn’t expect from such a large dog though). If you have a particularly chatty pup, they might even “talk” (a sound that can only be described as a mix of barking, howling, and growling) to you from time to time. For the most parts though, they’ll be so quiet you won’t even know they’re there.

11. The Akita Was Introduced to the U.S. By Hellen Keller 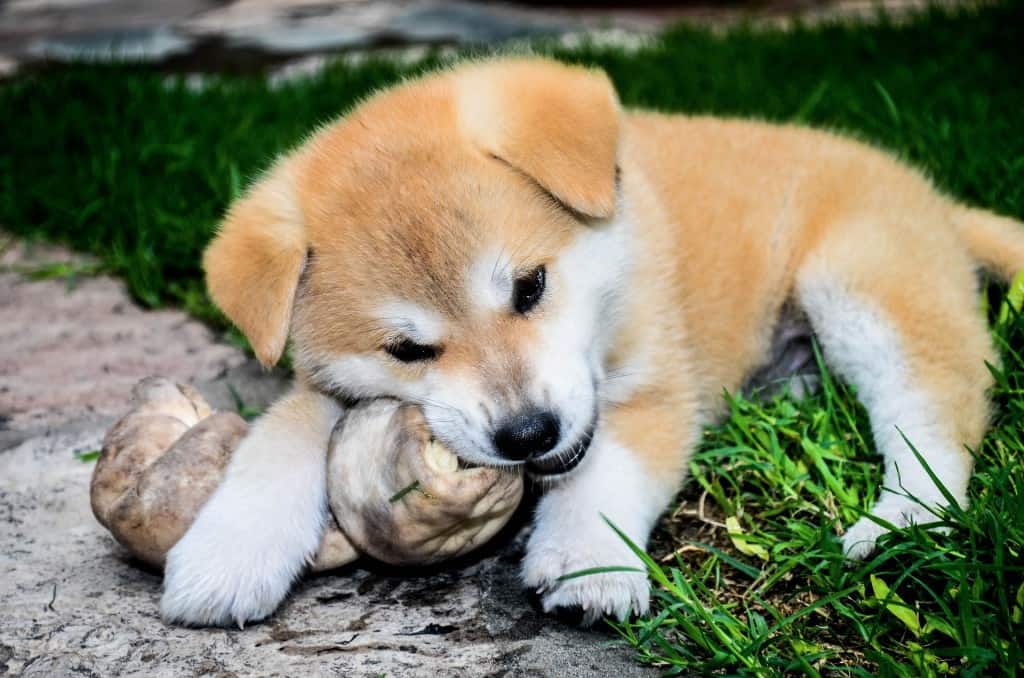 Helen Keller introduced the breed to the United States through her two dogs—Kamikaze-go and Kenzan-go, both of whom were gifted by the Japanese government.

For many years, the Akita was a breed that was only available in Japan. It wasn’t until the late 1930’s that they were introduced to the United States—interestingly by none other than Helen Keller.

During a visit to Japan, she had learned about the story of Hachiko—the loyal dog who waited for his master for nine years. Impressed by their loyalty, she soon expressed a desire to have one of her own; not long afterwards, she was given a puppy named Kamikaze-go. Tragically, however, he died before his first birthday. In response, the Japanese government presented her with his younger brother—Kenzan-go. Ultimately, it’s through these two dogs, that she had introduced the breed to the United States.