You may not know the breed name, but chances are really good that you have seen the Weimaraner many times before.

Photographer William Wegman has been taking pictures of these beautifully unique dogs for 40 years. His love of the Weimaraner breed is on display in all of his artwork, and his images are found in galleries, books, and calendars all over the world. Wegman’s latest release is called “Being Human” and showcases his Weimaraners Flo and Topper in a variety of different outfits and scenes.

But before you make the decision to own one of these gorgeous dogs, make sure you’ve read through these 11 things about this stunning breed to see if it’s a good match for you.

1.    The Weimaraner originally came from Europe.

Germany’s Grand Duke Karl August wanted to create a superior hunting dog. It is believed he crossed a Bloodhound with other European hunting dogs, and the Weimaraner was born. It was named after the town of Weimar, where the Grand Duke made his home. They came to America in the 1920s. 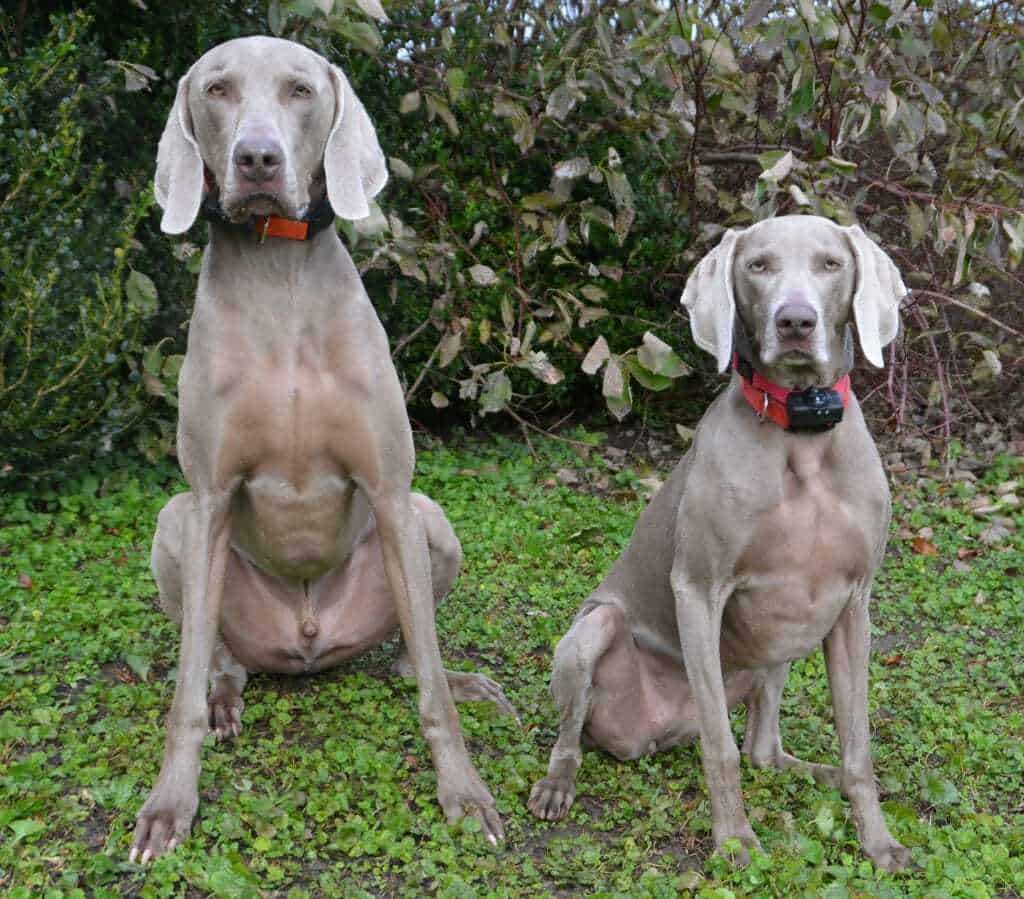 Deuce (left) is a male who is 92 pounds. Lily (right) is a female who weighs 65 pounds. They were not littermates, but were born at roughly the same time and have been raised together since they were a couple of months old. They are now five years old.

3.    The Weimaraner was bred to be hunters.

The Weimaraner was initially taught to hunt large animals like bears and mountain lions, but as those animals became less sought after, the dogs were retrained to hunt gamebirds. They are great pointers, a skill that is necessary for a hunting dog, but which is also one of the reasons that Wegman says they can sit still long enough for him to photograph them in unique positions.

4.    The nickname of the Weimaraner is “The Gray Ghost.” 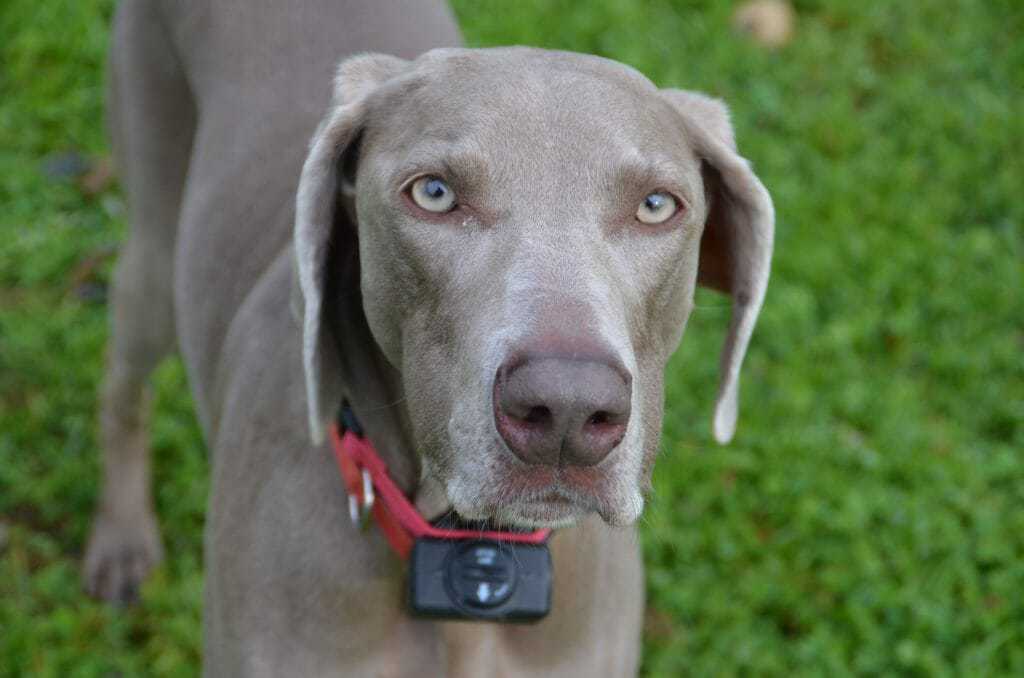 The Weimaraner’s light-colored eyes are usually gray, gold, or a greenish blue color. Their fur is a stunning light to medium gray that is unlike any other breed and helped to earn them the nickname “The Gray Ghost.”

5.    The Weimaraner has a shorter lifespan.

Like most other large dogs, the Weimaraner doesn’t tend to live as long as smaller dogs. In fact, smaller dogs typically outlive larger dogs by up to several years. There are a couple of reasons this is true. The first is that a larger dog may develop diseases correlated with age sooner than small dogs. The second is that because they grow quicker than small dogs, their cells may grow faster, which would include cancerous cells that might develop as they get older and lead to more deaths from cancer in larger dogs vs. smaller ones.

This is a breed that needs a good amount of exercise every day. They prefer to run around and really stretch their legs. A quick walk once a day will not be enough for these active dogs.

7.    Apartments are not a good living environment for Weimaraners.

Because of what we’ve already noted about the size of the breeds and their need to run and exercise on a regular basis, the playful Weimaraner will do best in a house with a larger yard.

If you only want to take your dog out a few times a day and only in quick stints, the Weimaraner may not be the dog for you. This dog needs solid exercise every day, including a big space to run and stretch its powerful legs.

8.    There are several common health issues that the Weimaraner faces.

Among the most typical health concerns for Weimaraners are hypothyroidism and problems with their hips, hearts, and eyes. They are more likely than other dogs to suffer from muscle strains and pulls due to how much they run. Finally, some have been known to suffer an adverse autoimmune reaction to vaccinations when they’re given close together. Therefore, you should talk to your vet about spacing them out to eliminate these potential problems.

Despite their imposing size, these dogs are great with kids and really crave human companionship. Weimaraners tend to not get along with cats or smaller dogs unless they were raised with them since they were puppies. Other dogs of similar size can be great companions and really help with socialization. 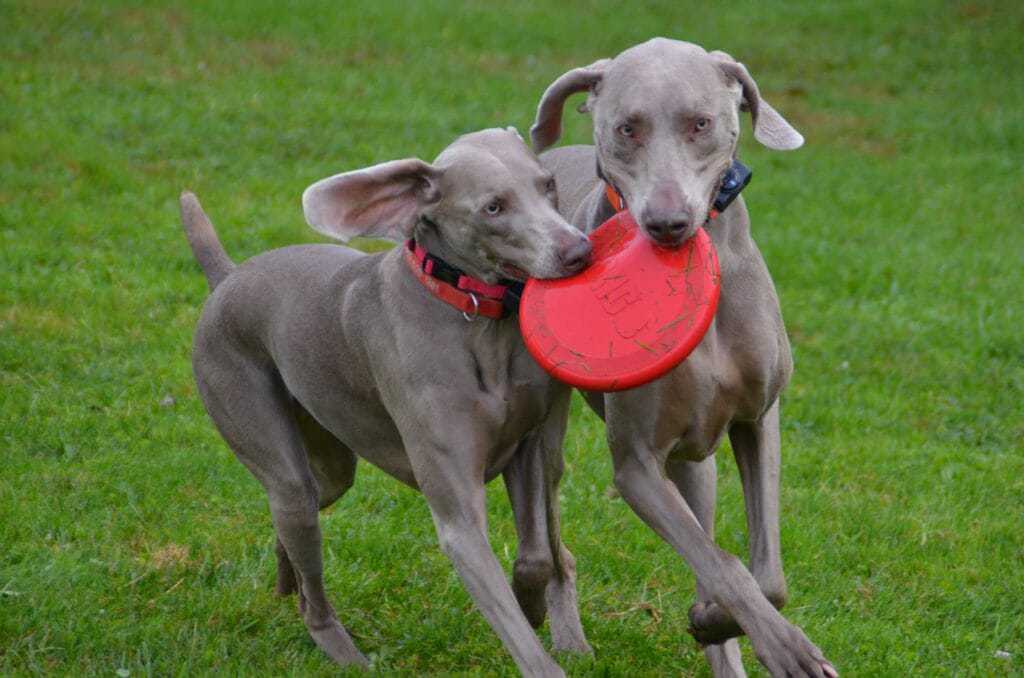 Deuce and Lily have been raised together since they were a few months old. They get along really well and even share a rubber toy when they play fetch and get their exercise!

Compared to other dogs, this breed is low maintenance. No grooming is required and although they shed, it’s not overwhelming. You’ll need to keep their nails trimmed and have regular vet appointments to keep an eye out for the health issues we mentioned. Nutritionally, they do best with a diet high in protein.

11.    The Weimaraner has had two brushes with fame that increased their popularity over time.

Their first time in the spotlight in America came in the 1950s when both President Dwight Eisenhower and Grace Kelly owned one. Eisenhower’s dog Heidi had full run of the White House and Grace Kelly’s was a gift from her brother when she married Prince Rainier. Kelly was photographed playing with the dog in Monaco.

Their second taste of fame came when Wegman’s photographs featuring his beloved Weimaraners gained a huge following in the 80s and 90s. The Weimaraner is now #34 in popularity out of 194 breeds on the American Kennel Club (AKC) registry.

The Gray Ghost is a stunning dog, but it’s not meant for everyone. Make sure you’ve done your research on the beautiful Weimaraner before you decide if you have a fitting home for one.