If you’ve heard of Pomeranians than you’ve likely heard of Jiffpom.

He’s a world famous pomeranian dog who lives in L.A., has starred in a Katy Perry video, once held a Guinness World Record, and currently has more than 26 million (yes, million) on his various social media accounts.

And if all that wasn’t enough, this Pom, who is originally from Illinois but now lives in L.A., has a net worth of $25 million.

Jiffpom is an adorable Pomeranian who has given his breed a great name and certainly boosted their popularity in recent years. And although not all Pomeranians will make you a millionaire they can make you happy at home if the breed is a good fit for you.

Here are 13 things to know about this fascinating little dog.

Pomeranians have an amazing coat.

Despite not being a working dog or having much association with water, the breed has a double coat to protect it. The long, harsh top coat and the shorter, soft, dense undercoat work together to protect this small dog from all types of weather. Pomeranians wear their coats long, which means although it’s protective, it’s also high maintenance. To keep it from matting or knotting, the coat should be brushed several times a week, and the Pomeranian should see a groomer every 4-6 weeks. 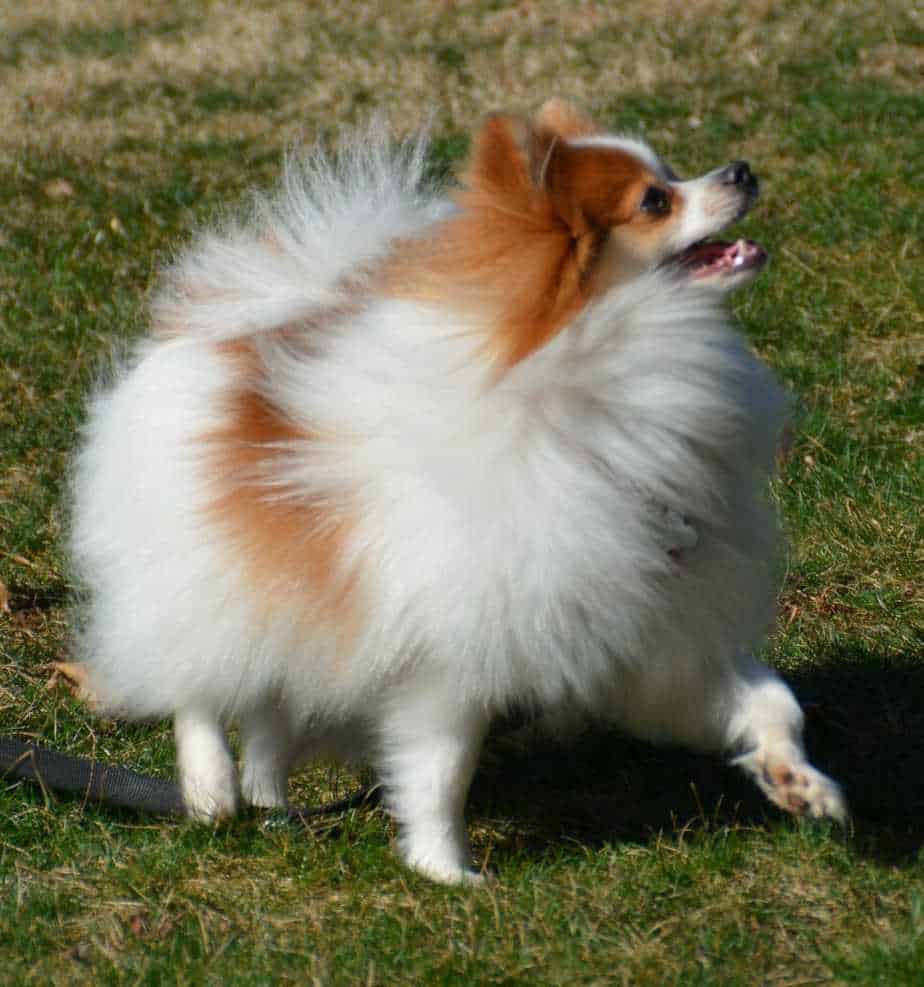 You can see the long coat on this Pom as she walks. It’s rougher and coarser than the fur that is on her legs and her head.

The coats of Pomeranians come in a large number of colors.

Unlike other breeds that only have two or three colors that are acceptable breed standards per the AKC, the Pom has 24 different colors and color combinations that are officially recognized. Those 24 are broken down into three classes by the American Pomeranian Club: the Red, Orange, Cream, Sable Class; the Black, Brown, Blue Class; and the Any Other Allowable Color Class. 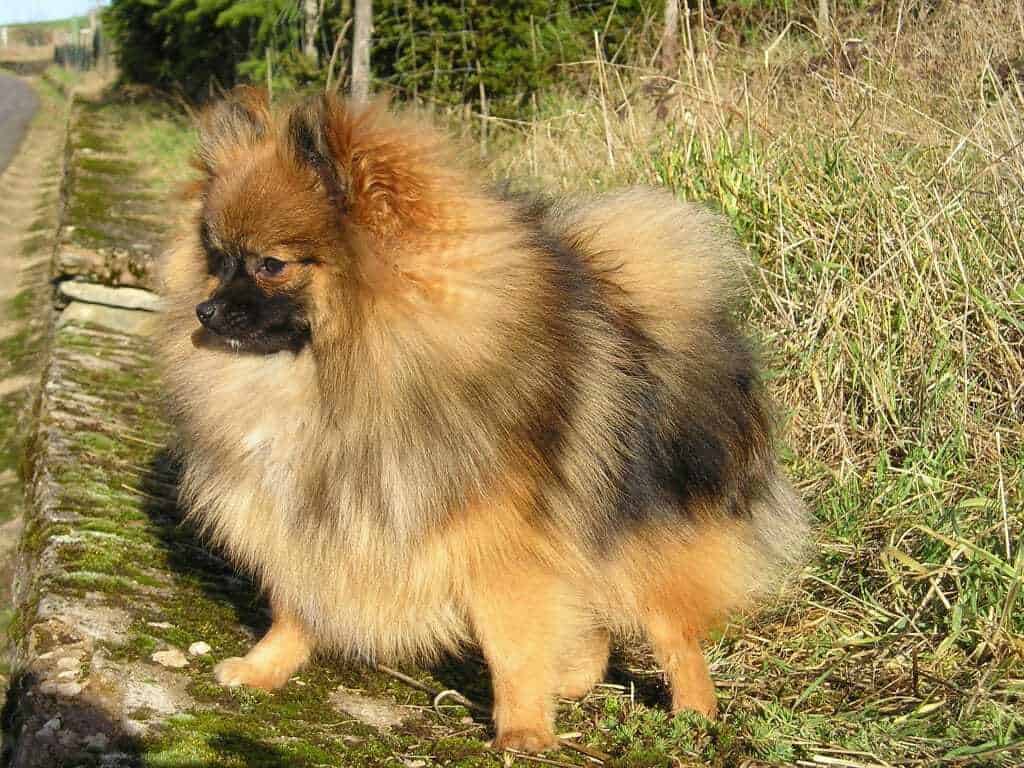 This Pom’s black and brown fur is distinctly different from the white and red-brown dog above, but both are recognized by the AKC as meeting the breed standards for coloring.

Pomeranians are named for Pomerania.

The breed is of Nordic descent, bred from sled dogs. It’s named for Pomerania which, while around today, used to be an area in northeast Europe that contained Poland and what used to be West Germany. Obviously, it doesn’t exist by that name today. In that part of the world and others, the breed is called “Zwergspitz,” which translates from German to English as “Dwarf Spitz.” They’re called that because Pomeranians as we know them weren’t originally as small as they are today, so when people bred the smaller breed, they called it the dwarf version of the original

There’s a lot of personality in a little package with the Pomeranian.

These dogs are inquisitive, bright, curious, and quick to react to things around them. In its breed standard write-up on the Pom, the AKC uses the words “buoyant, cocky, commanding, and animated” to describe this little Pomeranian – all in a body that weighs less than seven pounds and stands no more than seven inches tall. The breed gives new meaning to the saying that good things come in small packages. 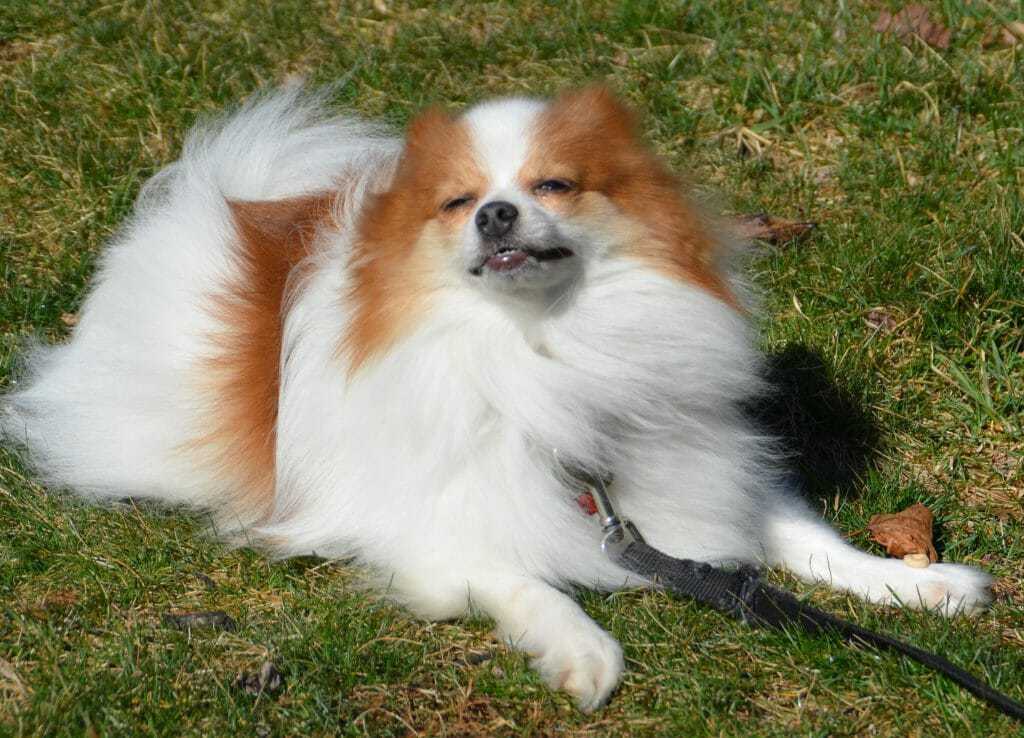 This picture highlights the fun personality of the breed. Note the Cheerio on her front leg. She’s been taught to ignore that treat until her owner gives a command. For the full 30 seconds her owner had her ignore the treat, she looked away with her eyes closed, looking like she was tanning herself in the sun.

Credit for the popularity of the Pomeranian stems back to Queen Victoria.

On a trip to Florence, Italy, during her reign over Great Britain, Queen Victoria discovered the ancestor to today’s Pomeranian. She fell in love with the breed and brought some dogs back with her when she returned to England.

Over the years, she became a breeder and shower of Poms and is credited with breeding the smaller stature dogs that we know today. The Poms that the queen first saw are thought to be closer to 30 pounds as opposed to the current breed standard of seven or less. Other famous breed owners include Mozart, Michelangelo, and Marie Antionette.

The Pomeranian needs a fair amount of exercise and is deceptively fast.

While a lot of other dogs in the toy group don’t need a lot of exercise, this breed is the exception. It’s definitely happy to be a lap dog and to lounge around inside, but these dogs also need a good amount of time every day to run and play.

One thing to watch out for is that this tiny dog is deceptively fast. For this reason, you don’t want to drop the leash while you’re walking a Pom, thinking you’ll easily be able to catch up to it should it run away. The breed even held the record for “Fastest Dog on Two Legs” for a year. If it can win that record on just two legs, imagine how fast it is on all four! 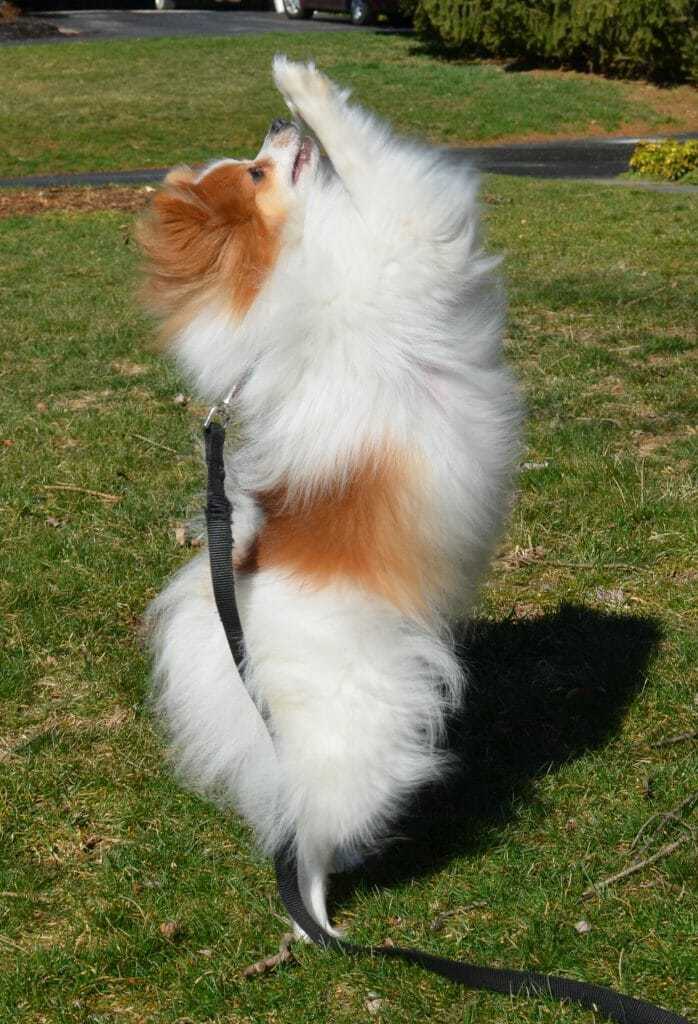 Ginger’s owners exercise her several times a day in their yard. One of the things they’ve done is teach her tricks like this, where she gets her energy out by standing and jumping around on her hind legs.

Don’t be fooled into thinking that because they’re such small dogs, that the price will be equal to the size. Not at all. This is one of the more expensive purebred puppies to purchase today. A check of the AKC puppyfinder search engine for this breed will reveal that you can’t purchase a purebred Pom puppy for less than $2,000, and most are $2,500 or higher. The top of the current price range is $4,000.

The Pomeranian is very small but usually lives longer lives.

As we have mentioned, this is a teeny dog in the toy group. Breed standard requires that a show dog range from six to seven inches tall, and weigh anywhere between three and seven pounds. Like other smaller dogs in the toy group, they tend to have a longer life expectancy than larger dogs. The life expectancy of a Pom is 12-16 years.

The Pomeranian should not be left outside by themselves.

Even if you have the best trained Pomeranian in the history of the breed, you should not leave it outside alone in your yard. Like many dogs in the toy group, this type of dog is at risk for being snatched up by birds of prey, and it’s small enough and light enough for a bird to grab it and fly away with it. Even if the dog is not on a leash, you should always keep her nearby when you’re outside with her in case you have to snatch her up quickly. 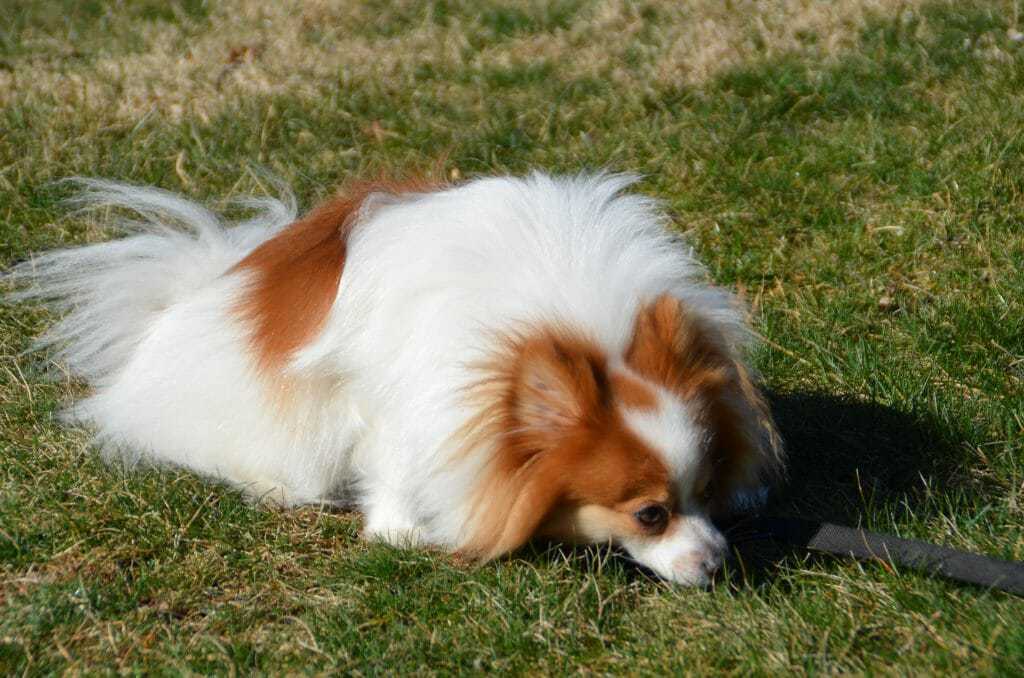 This Pomeranian is laying outside after running around. At seven pounds, it would be easy for a hawk or other bird of prey to swoop down and easily snatch her up. It happens quickly. It’s best to never let your Pomeranian outside without close supervision.

The Pomeranian is a good watchdog for your house, but is not great with kids.

These dogs are friendly and don’t tend to be as anxious or nervous as other smaller breeds, but they do tend to be territorial. This Pomeranian loves its house and loves its people, and they are prone to barking if someone gets too close to either. For that reason, it makes a good watchdog. However, that’s the same reason it might not be a great breed if you have small children. Children don’t always recognize boundaries, and if they take something that belongs to the Pomeranian, it might act out. Children also aren’t a great fit for this breed because the Pomeranian is so small that a child could accidentally hurt it.

The Pomeranian is highly intelligent.

This breed is fairly eager to please, which makes it highly trainable. They excel at agility training and obedience school, and some of have even been trained to serve as therapy dogs.

Ginger’s owner places a treat – a piece of her favorite cereal – on her front left leg. The Pomeranian keeps it there until the owner gives the command to release and eat the treat. This is one of several tricks that Ginger the Pomeranian knows.

The Pomeranian is generally healthy, but the breed does have a few health concerns.

The AKC recommends that all dogs of this breed undergo kneecap, heart, and eye examinations to ensure that some common health problems in those areas aren’t being bred down bloodlines in these dog breeds. Something else to watch out for is Alopecia X. This is a skin condition that leads to hair loss and a darker or blacker pigmentation in certain areas of skin. While it’s not common, it has been known to occur in these dogs.

The Pomeranian won Best in Show at Westminster Kennel Club in 1988.

If all of that wasn’t enough to convince you that the breed is a great dog, maybe winning Best in Show at Westminster will finally seal the deal. Where other popular breeds like Labrador Retrievers, Great Danes, Golden Retrievers, Rottweilers, and Dachshunds have failed, the mighty Pomeranian won Best in Show at the 1988 WKC Dog Show. We told you it’s a cocky dog. Maybe that’s because it has won where others have not!

This breed is undoubtedly adorable, definitely high maintenance, and ready for its close-up. If it’s a good fit for you, you’ll have a loyal companion for years to come. 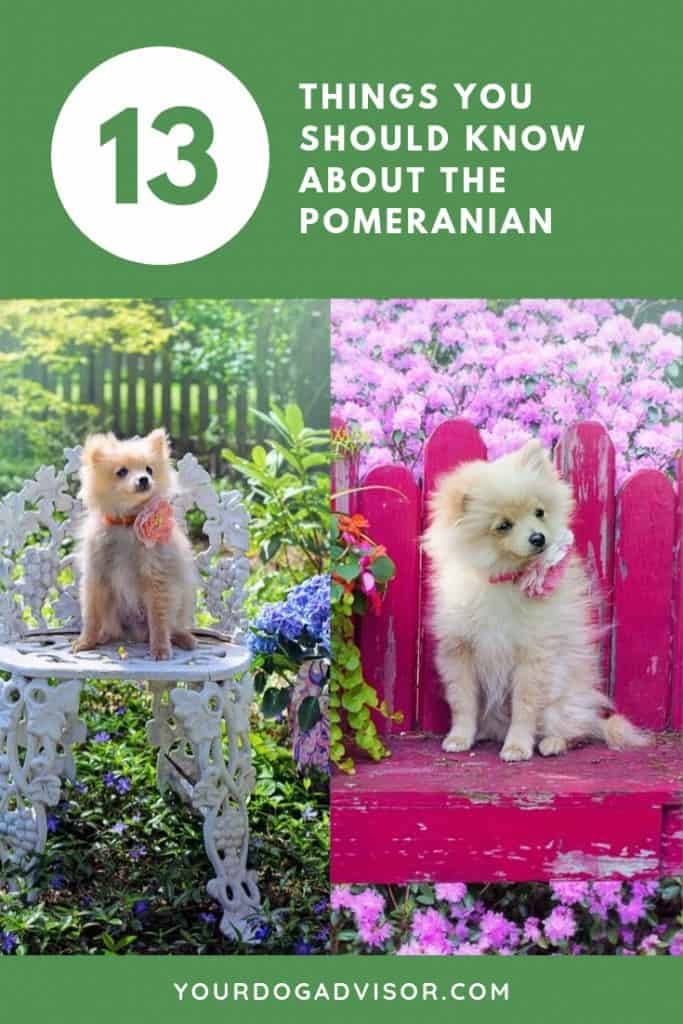