There are a lot of adjectives to describe the Italian Greyhound: little, strong, agile, fast, smart, stubborn, loyal, and athletic top the list.

They go by at least two nicknames: Iggy and IG.

They’ve been associated with royalty practically from the time that they were first bred, and, just like their relative the Greyhound, are known for their speed.

These dogs are small but mighty, and we’ve just scratched the surface in terms of what you should consider about this breed if you’re looking to make one part of your family. Read on for 13 specific things to know about Italian Greyhounds.

Iggies are small dogs but don’t tell them that.

This breed is a classic case of a big personality in a small body. Stats from the AKC report that Italian Greyhounds will typically grow to between 12-15 inches tall and weigh between 7-14 pounds. That smaller stature makes them members of the Toy Group, but their personality is far bigger than their body, and they’re known for attempting to do things like jump on top of or off of furniture that’s very high because they overestimate their size. 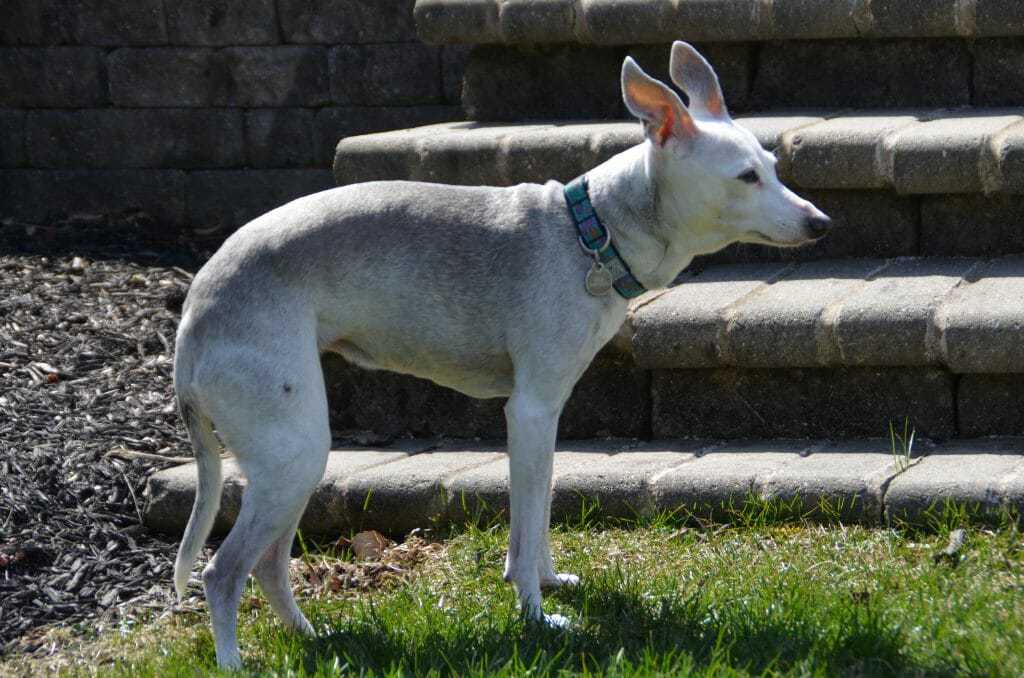 Bella is almost 14 years old. She weighs 14 pounds and is very healthy for her age. She has the typical IG form with the long tail, sloped back, and long pointed snout.

Because of their body structure, you should not use a regular buckle collar to walk them.

This breed has a unique body structure, and the length of the dog’s neck in addition to how it’s tapered makes fitting it for a collar a tough task. For wear around the house only, the Italian Greyhound Club of America recommends a breakaway collar that can quickly and easily be removed if it gets caught on something. However, they also say that you should not walk the dog with that collar, but instead use a martingale collar that won’t slip off as it’s designed to tighten around the dog’s neck if it pulls.

Italian Greyhounds are sensitive to temperature.

A lot of people who own small dogs choose to dress them in clothes or coats. Sometimes it’s done more to show off how cute their dog is rather than out of a need to protect the dog, but this breed genuinely needs the protection from the elements. Because of their low weight, small size, and low body fat, they should wear coats when going outside for walks in cold weather. 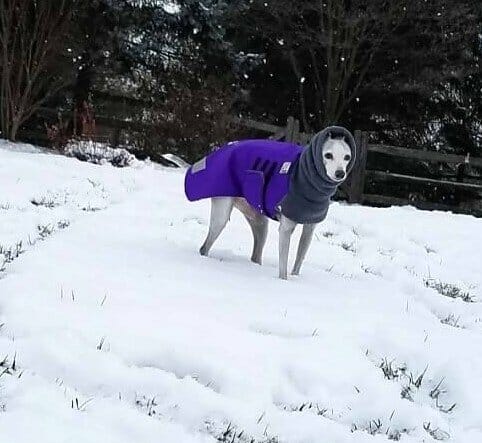 Bella wears both a coat and a hood in the colder temperatures to make sure that she retains her body heat and isn’t overexposed to the elements.

There can be some serious health concerns for this breed.

As previously noted, they like to jump – sometimes up to places where they shouldn’t – and therefore are at risk for breaking bones as they are more fragile than they think they are. The breed should be screened for Progressive Retinal Atrophy, Legg-Calve-Perthes disease, color mutant alopecia, as well as hip, eye, patella, and thyroid issues.

Check this canine health site before adopting an Iggie.

The International Greyhound Club of America (IGCA) participates in the Canine Health Information Center. CHIC works with breed parent clubs to maintain records and lists of breed-specific health issues. Any breeder who decides to list with the CHIC is agreeing to meet breed-specific minimums and have all test results, both good and bad, published on its site.

Having this information is really important to significantly decrease the presence of some genetic issues through screening, resulting in responsible breeding practices. It also increases your chances of getting a healthy puppy if you choose a breeder from their list who has good test results. And since you can pay anywhere from $1,200 to $3,000 for an IG puppy, you’ll want to do everything you can to ensure that it’s healthy. 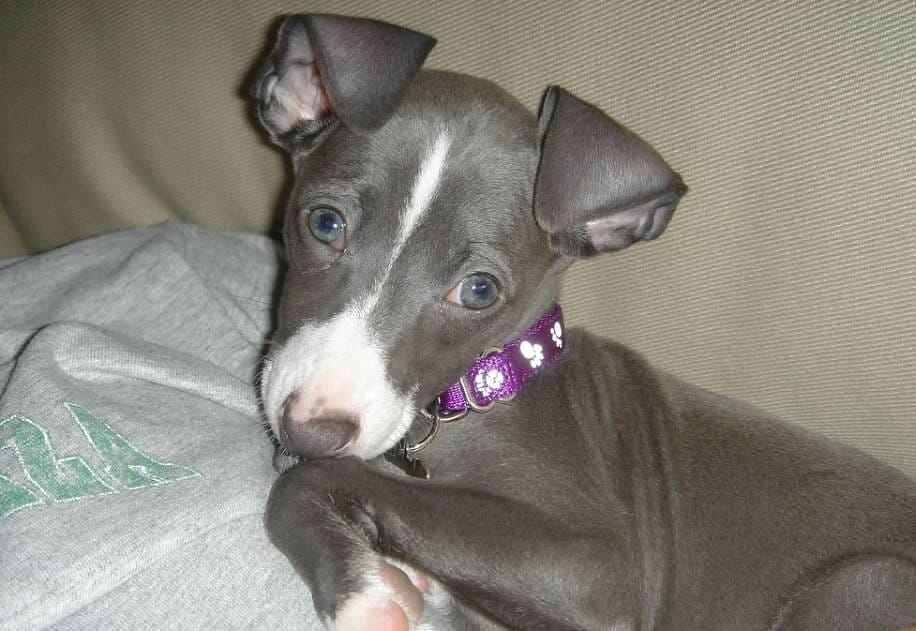 Here is Bella as a puppy. She has been home with her owners since she was eight weeks old.

They have been treasured by royalty through two centuries.

This breed has been around for 2,000 years. Archaeologists have found IG bones in the areas that are now Greece and Turkey, and researchers believe that the dogs were bred as companions to nobility. Owning one became a status symbol in Italy during the Renaissance, and many paintings from that time period depict dogs that look exactly like the breed we know today.

Famous royal owners included Catherine the Great and Queen Victoria, but it wasn’t just European royalty that embraced the breed. King Lobengula from Africa once traded 200 cattle for just one Italian Greyhound.

Americans fell in love with Iggies too.

The breed was first registered with the AKC in 1886. The AKC had only been registering breeds for ten years at that point, so this breed was leading the way. As two World Wars raged through Europe, IGs were at risk of becoming extinct. But American Italian Greyhound lovers kept the breed going during the first half of the 1900s, and later helped to repopulate the breed in Europe. Currently, Italian Greyhounds rank 72 in popularity on the AKC’s list of 193 breeds.

They are easy to care for and require moderate exercise.

If you’re looking for a low maintenance breed in terms of care, this might be the dog for you. They require no grooming and only an occasional brushing. Because of their small size, they don’t tend to eat very much, keeping your dog food bill low. They love to run, but only require a moderate amount of exercise every day to keep them healthy and fit. 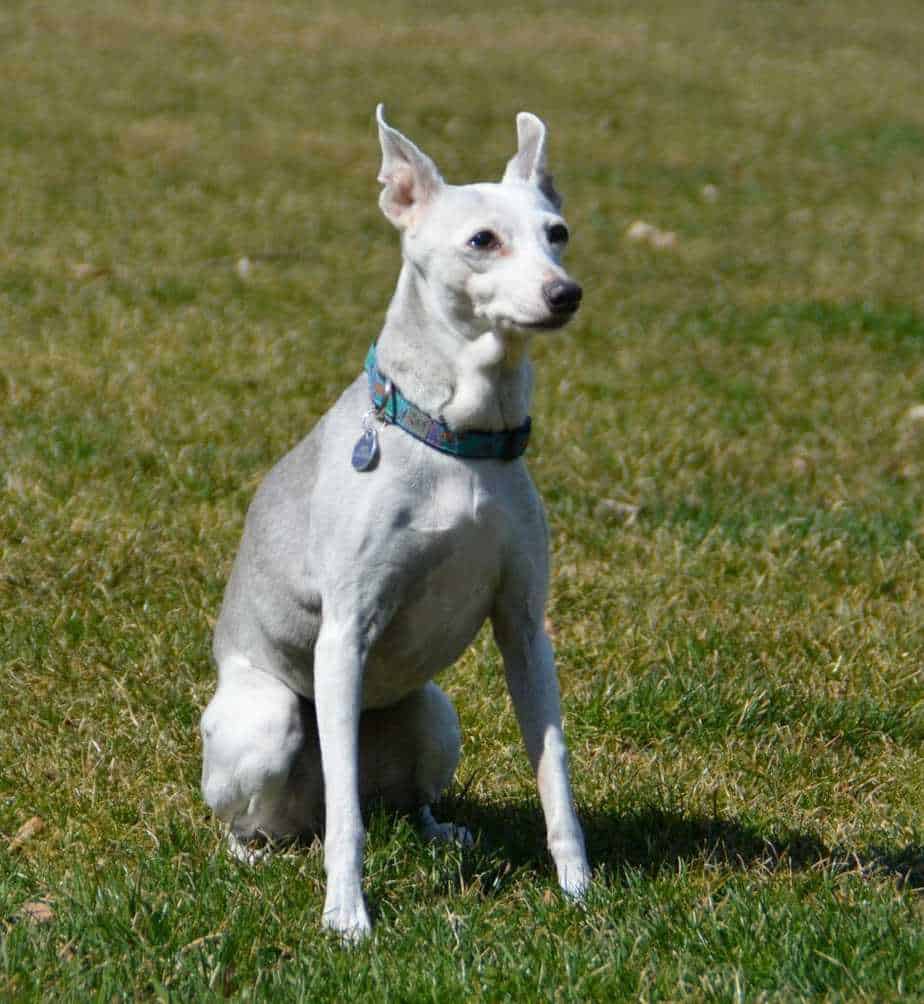 Bella has a large, fenced-in backyard that allows her to run to her heart’s content, giving her the exercise that she needs to keep her healthy and keep her from being too rambunctious inside the house.

This beautiful breed comes in a wide variety of colors.

As opposed to other dogs like the Rottweiler that have only one color that’s acceptable for the breed, the Italian Greyhound has 17 different officially recognized color combinations that meet the breed standard. There are several more colors that IGs can come in that are not formally recognized.

They can be hard to train.

This is a breed that you need to start training from a very young age. Even an eight- or ten-week-old puppy that you’ve just brought home can start training, especially house-training which can be difficult. They don’t respond well to punishment, so it’s best to work with a rewards-based system.

They can also be stubborn, and one expert noted about the breed, “Just as with your spouse, it usually works best to persuade the Italian Greyhound that doing a particular thing is his own idea.” The breed’s shorter attention span is something you should consider and work with when training. All that being said, IGs are smart dogs, and if you’re willing to put the time in, you can train them to do all sorts of things. 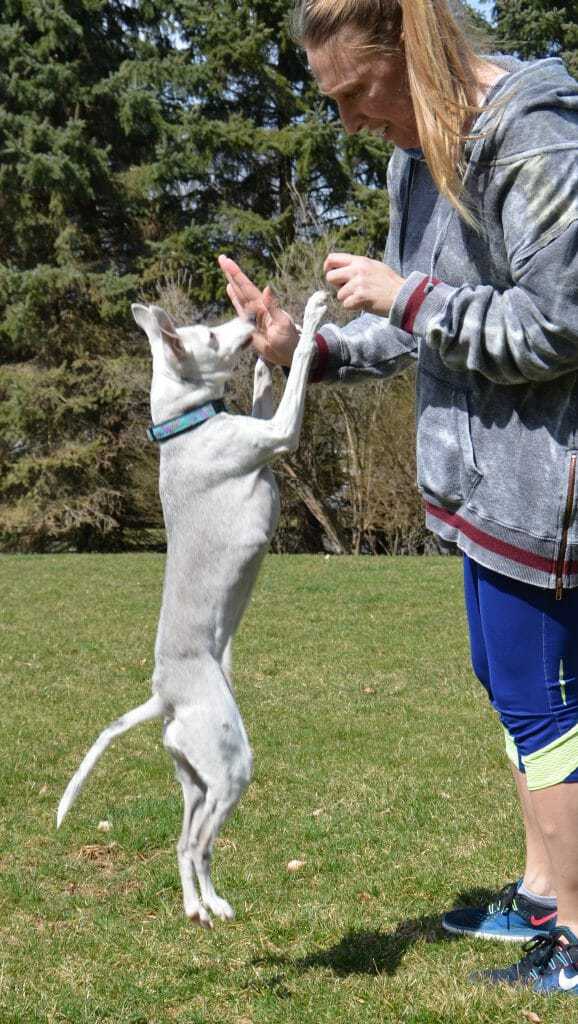 Bella’s owners have worked really hard at training her and keeping her agile, even as she gets older. In this picture, you can see her stretching and jumping to get a treat.

Never let an Italian Greyhound off of its leash.

This breed is fast and they don’t have a sense of danger, and that is a bad combination for a dog. They will run if given the opportunity, and they are fast. You are very unlikely to be able to catch an IG if one gets away from you. That’s another reason why collar choice is so important.


Even at almost 14 years old, it’s easy to see that Bella is still very fast, and still capable of outrunning her owners should she ever get loose outside of her yard.

They are wary of strangers.

Italian Greyhounds love their people and want to protect them. They will bark to alert you that someone they don’t know is approaching. Then they’ll stop barking and become slightly agitated and stay close to the people they know. Because they’re not incessant barkers like other dogs, there are definitely better breeds to consider if you’re looking for a watchdog. But don’t underestimate the loyalty of the IG to stay with its owner.

They are a celebrity favorite.

If you stroll the streets of NYC long enough, you might catch a glance of a celebrity walking an IG through the streets. Seth Meyers, Uma Thurman, and Sigourney Weaver are all Italian Greyhound owners and have been spotted taking their dogs out for walks. Seth Meyers has even carried his dog in a baby carrier.

As with all breeds, you’ll find some very passionate Iggy fans in the world, but even they would tell you that this is not a breed for everyone. Do your research and make sure an Italian Greyhound will fit in your family. If it does, you’ll be one lucky owner to have this loyal dog by your side for years to come. 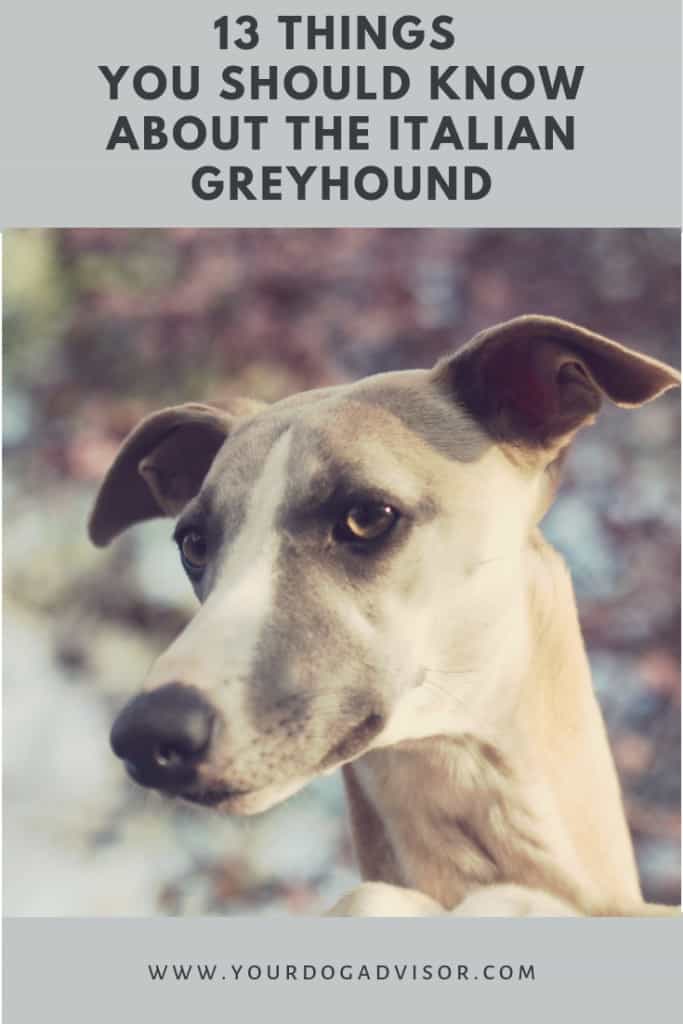 Calming Treats for Dogs - Made In USA - Helps With Dog...
Buy on Amazon
Bestseller No. 4 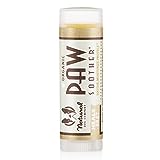 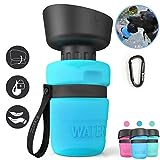