We all know the feeling of coming home and opening the door to an excitable dog jumping around, wagging its tail and looking happy to see you. It’s a satisfying feeling and one that, I am sure we can all agree, makes us feel special.

However, imagine one day that you come home and you do not hear the sounds of your dog’s paws or see the happiness in their eyes. Instead, you go into your home wondering where they are and why they have not come to greet you in their usual way.

Now, them not greeting you is not always a sign of guilt as it could be a number of other things such as tiredness, not having heard you or feeling under the weather. It is not uncommon for dogs to predict your reactions to what they have done wrong however, so there may be a number of things they do to try to avoid those reactions. Perhaps they simply do not want to be there when you get annoyed.

There has been some research into the idea that dogs do not feel guilt because they are simply reacting to your negativity instead however, they can sense when they have done something wrong or know when you are upset. They can react to your body language and tone of voice.

I’m going to share with you 8 ways that your dog might show guilt. Please be aware that all dogs are different and so this is not a one size fits all kind of situation.

We’ve all seen those puppy dog eyes… the ones where your dog looks ten times cuter than normal (who thought that was possible, right?). Puppy dog eyes, according to EarthSky, have evolved over the years as a way for dogs to communicate better with humans. When we see those irresistible eyes with arched eyebrows, it’s almost impossible not to feel some sort of strong emotion towards your dog.

If in the past you have seen your dog do this and reacted positively and in a loving way, your dog will remember this as it would end up being a positive experience for both of you. If that is one way they communicate in an attempt to make you feel strongly, they might well try this when they think you are upset with them.

Watch out for those puppy dog eyes, they can make you feel so many emotions.

Ozzy, the Cocker Spaniel I see occasionally, is a puppy and consistently uses those puppy dog eyes when he is shut in his crate for a while. Outside of his crate he is the most excitable puppy that you could meet and he certainly knows how to pull at your heartstrings to get what he wants. He is easy to give in to, regardless of whether he has done something wrong or not. 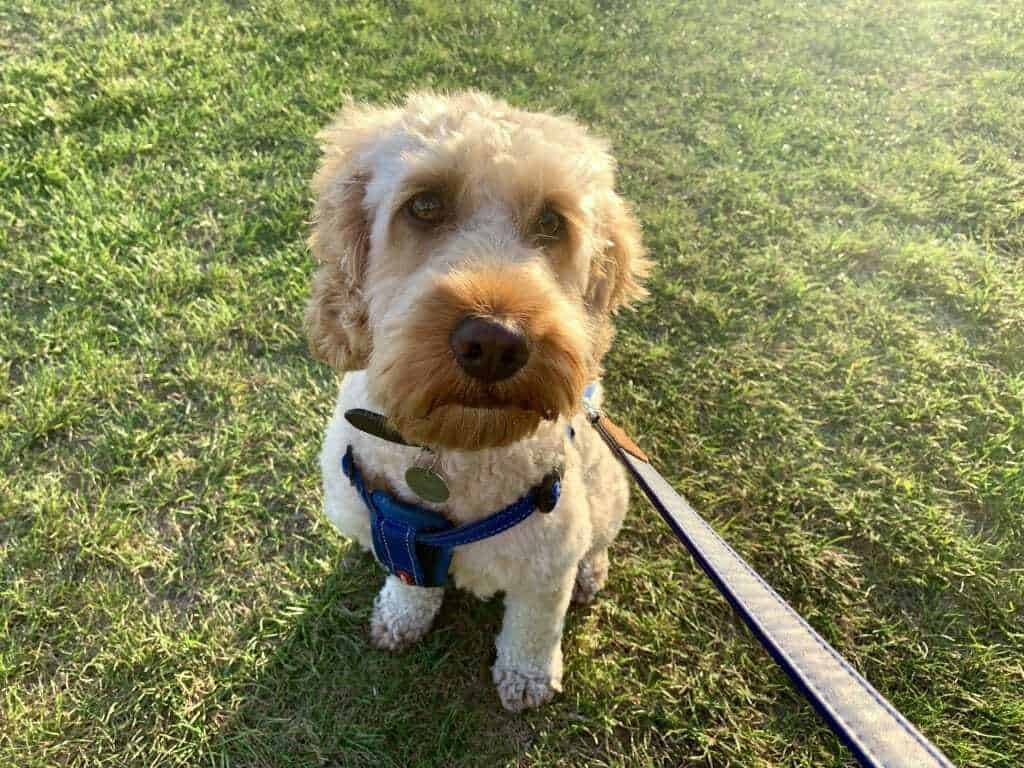 This is George the Cockapoo’s way of saying ‘I’ll pull my puppy dog eyes so that you give me a treat’.

Generally, there are a few different reasons why dogs hide somewhere. These include:

Let’s imagine that you have just walked into your living room to find tissues strewn across the whole room. You know immediately who did it… your beautiful dog. What’s your first reaction? Is it to smile or is it to get frustrated because you have to clear it up?

You might say something in an angry tone, try to call your dog to you in a negative way and have slightly wooden body language. Your dog can understand the way you speak to them, even if they cannot understand specifically what they have done wrong. If they get a bad vibe from you, they may want to hide away to avoid it. You might find your dog in a small space such as the corner of a room, under the bed, behind the sofa or behind a door.

They could simply be hiding away from your reactions because they are anxious about what you might say or do to them.

One thing to remember is that if you have come home and are unsure of when the event happened, your dog will not be able to make the connection of why you are trying to punish them. They will just react to your reactions in that moment.

After being with your dog for a while, it’s easy to understand what type of dog they are. You know their habits, what food they like to eat, how they act around you and where they like to chill out.

It seems only fitting that you can also tell if your dog seems quiet. I do not necessarily mean this in terms of volume, unless your dog is particularly noisy. What I mean is that they may not have as much presence as usual – they might seem a little off.

4. Avoiding looking at you

Have you ever noticed that when you’re annoyed at your dog they avoid eye contact with you? Perhaps you’ve seen them looking downwards and trying not to meet your gaze as you repeat their name.

According to Wag!, dogs use eye contact as a way of communicating. They said that when dogs meet you or other dogs with a stare, they have to choose whether to hold the gaze or not. If they hold the gaze, it can be seen as a challenge in their eyes. However, looking away shows they are backing down.

This means that perhaps when your dog is not looking at you, they are backing down to your challenge to tell them off for bad behaviour. Perhaps they do not want to show a reaction to you because they are afraid of conflict. 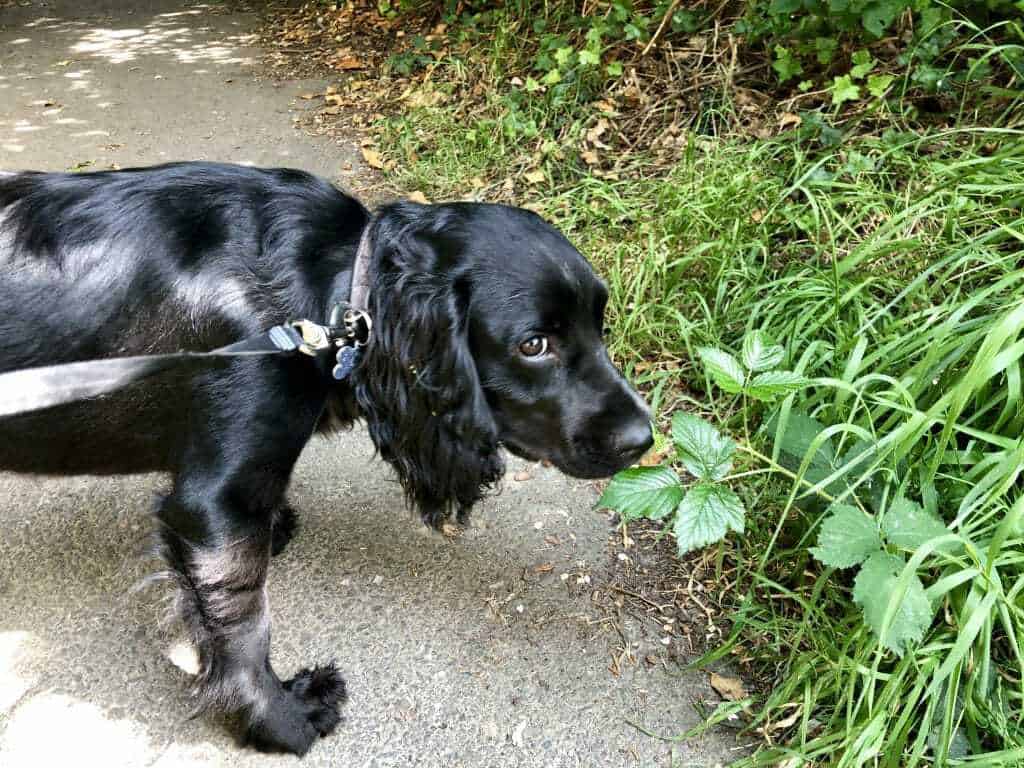 ‘I’m allowed to sniff this, right?’

Body language tells us a lot of things about both humans and dogs. When a dog is afraid of another person or animal, they tuck their tail in to show that they are in an uncomfortable situation.

Although your dog may not remember exactly what it is that they have done wrong, they may be frightened of your reaction to it and feel like they should feel threatened.

When Nelly knew she had done something wrong, she would tuck her tail between her legs, cower away and try to back away slowly. This was her way of reverting to submission. She understood that she had done wrong but what she really did not like was my mum’s reaction.

A dog communicates a lot with their ears. Did you know that, according to Puppy Playground, dogs can hear four times the distance of us humans?

Depending on the shape of your dog’s ears, they can hear so much more than you can, which is why they are super sensitive to your tone of voice. Charlie, the Westie I look after, has pointy ears that move around like a satellite dish so that he can hear in the direction the sound is coming from. It’s pretty cool to watch…

Nonetheless, dogs not only use their ears to hear you but also to show you how they feel. If your dog’s ears are drooping, it means that they know something is wrong. The more your dog holds his ears downwards or backwards (depending on the type and shape of their ears), the more fear they feel. This means that they feel scared and guilty for having done something that does not please you. 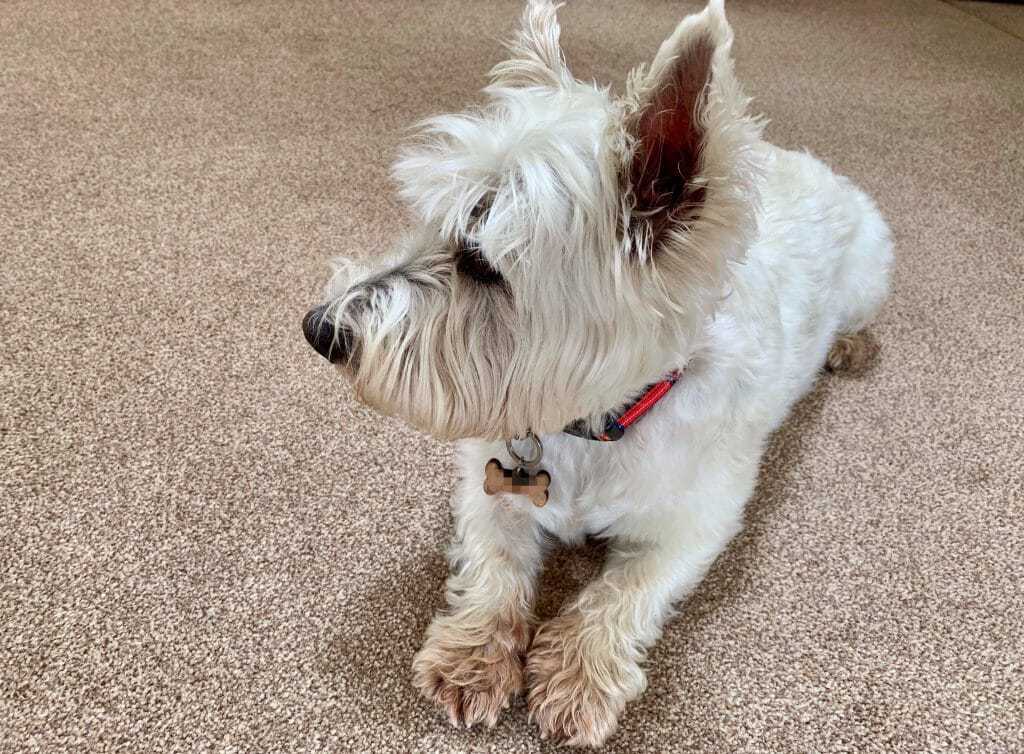 Dogs are very expressive with their ears… Notice how Charlie perks his up even more when he hears something out of the ordinary.

7. Slow to approach you

As dogs are good at understanding emotions and good at using their ears to understand your tone of voice, they know if they should feel worried about what you might say or do. This can make them slow to approach you, as they may be scared about your reaction the closer they get to you.

Take the dog in this video for example. Notice how he is slow to approach his owner after she repeated her name a few times. The dog was slow, showing fear and guilt. The dog does not want to confront what she has done wrong and that is shown by her slow reactions.

8. Pawing at you as an apology

Some dogs may not understand what they have done wrong and instead want to try to change your mood. Nelly would sometimes do this when we would have ignored her for a while because she had done something wrong.

She would follow us around and when we sat down, she would paw at us to get our attention. This was her way of trying to show us that she wanted to make us happy once we gave her our undivided attention.

On some occasions, she genuinely would paw at us as we were telling her off. This could be because she did not want us to feel anything negative, and so it was her way of communicating with us to show she was not afraid and wanted to make amends. 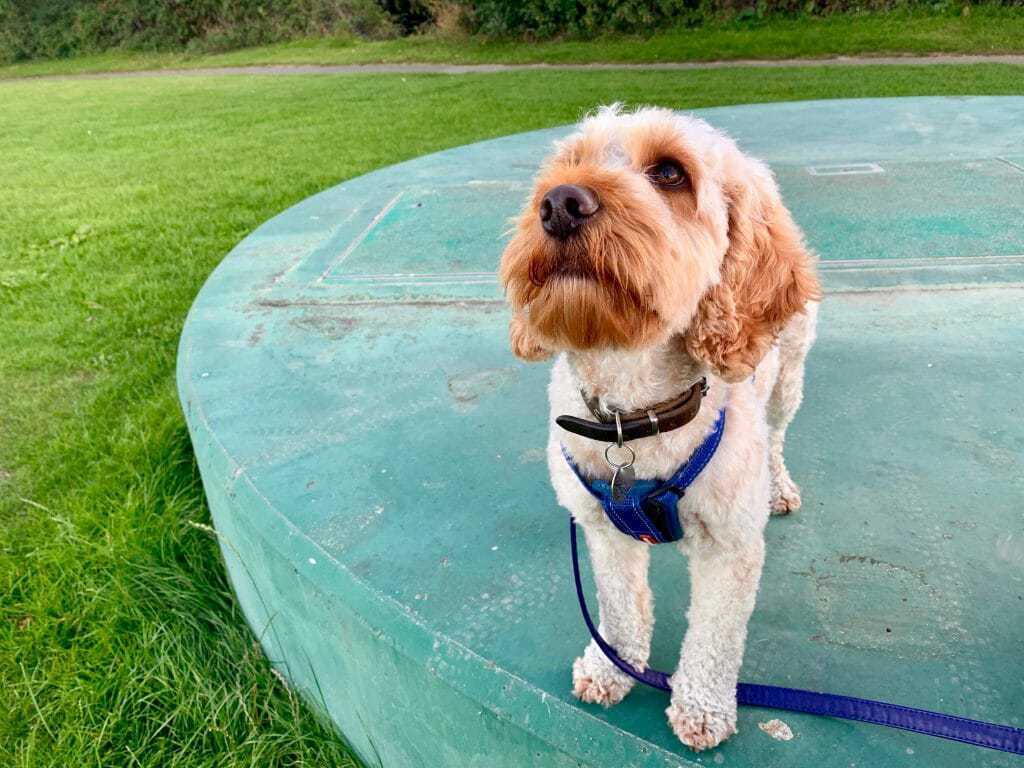 George is the sweetest dog in the world, it’s hard to imagine him doing anything wrong.

That’s just a few ways that your dog might show guilt. Remember that it may not always be guilt that your dog is showing – it could be the fear they feel from your reactions.

If you’re worried about your dog getting up to too much mischief when they’re home alone, try to pick up some tips on how to keep your dog entertained.

Look out for these signs and if you need more guidance on looking into your dog’s behaviour, have a look at what your dog’s body language might mean.

The main things to take away from this article are:

So, are there any other ways that your dog shows guilt? 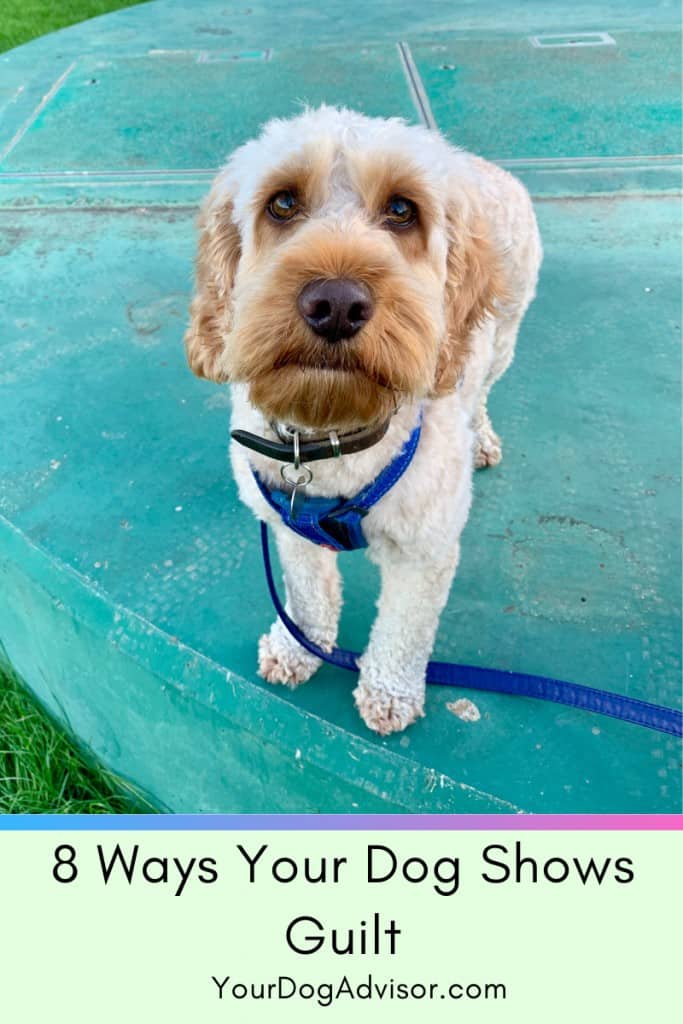