Six years ago, a Catahoula Leopard Dog came into my life in a most unusual way.  I had just come from the grocery store. When I opened the car door and started to step out, this puppy ran from under the house to me.  She put her paws on my leg and looked up at me like “when’s dinner.”. I have had this wonderful dog for six years now and am still finding new quirks she has.

Catahoula Leopard Dogs are wonderful companions.  These leopard dogs are not, however, for everyone. If you are a first-time dog owner, you should probably choose a different breed.

Here are eleven things you should know about the Catahoula Leopard Dog: 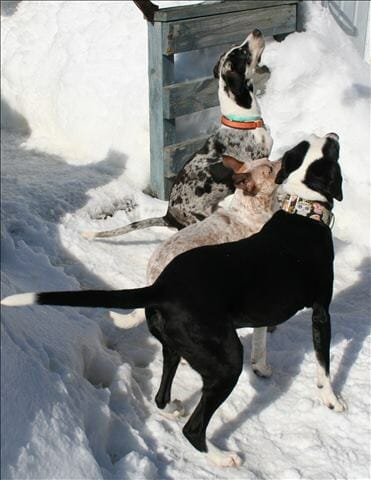 Two Catahoulas on either side of a cattle dog.  Notice the dogs have very different colored coats.  The dog has a number of color patterns on their coats. Photo Courtesy of Shannon Nachajko.

1)      History of the Catahoula – Originated in Louisiana

This was a working dog bred by Native Americans in Northern Louisiana and Louisiana settlers to herd feral hogs and cattle that were running loose.  In fact, sometimes the dog is called the Louisiana Catahoula Leopard Dog.   The dog is the state dog of Louisiana. Because the dog was developed to hunt dangerous stock such as wild hogs with minimal human intervention, Catahoulas can be very independent.  They are not a beginner’s dog.

2)      Catahoulas have spread beyond the Gulf Coast.

When Katrina hit, shelter and pound dogs were evacuated from the Gulf Coast, especially Louisiana, to shelters all over the United States.  This evacuation has created colonies of Catahoulas in many areas, leading to increased popularity in places that had never before seen a Catahoula.

3)   The new-found popularity of the Catahoula Leopard Dog

has not gone unnoticed.  The American Kennel Club (AKC) collects pedigrees from Catahoula breeders under their Foundation Stock Service (FSS).  When enough dogs have been entered in the FSS, the breed will be approved and will compete as a herding dog in AKC shows and other AKC events.

A good picture of how the leopard dogs conform. Photo Courtesy of Shannon Nachajko.

4)      The Catahoula breed standard requires each dog to have a long tail.

This may seem to be a strange requirement, but many hunters dock the tail.  This is so it won’t get damaged when the dog is working to find hogs in the dense underbrush, then holding that hog for the hunter to shoot.  Catahoulas are allowed to compete in obedience, agility, and herding competitions if they have a docked tail, but not in conformation.

5)      Catahoulas do not mature until the dogs are around two years old.

This means you need to crate them when you are not around.  Otherwise they will get into things around your house and chew on them.  You will also have to make sure your things are put up or they will get chewed up while you are there if the dog gets bored.

They may refuse to learn a house rule or a skill you want them to have.  The best way to manage a Catahoula is with consistency –enforce the rules all the time.  Set up a “pay to play” system where before the dog gets something they want, they must do something you want to earn it.  In this scenario, all the toys belong to you. When the dog wants a toy, he must first sit at your feet to earn it. After he does what you want him to, you let him “borrow” the toy for a while. 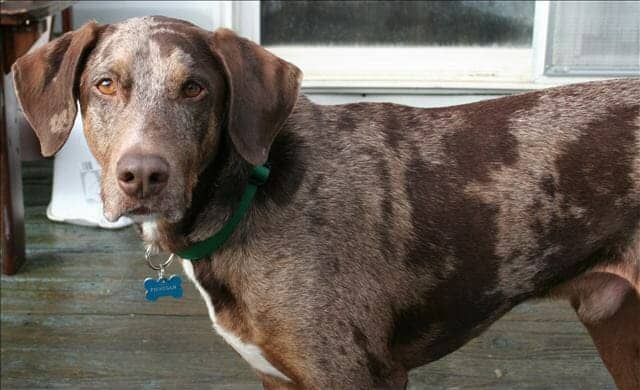 You can see the love and loyalty in this Catahoula’s eyes. Photo Courtesy of Shannon Nachajko.

They make their family into their pack. Each dog usually singles out one person in the pack to worship.  That person is the dog’s special person and the dog will stay with them as much as possible. He will protect his person and family from all takers.  This can be a problem if someone outside the pack does something the dog considers dangerous to a member of the dog’s pack. For example, if the kids in the pack are playing with other kids and someone shoves the dog’s kid.  The dog may nip or even bite the kid who shoved his kid. Always supervise children when they are around dogs, including your own dog.

9)      Catahoulas need one hour of high energy exercise a day.

Agility can help provide that, as well as offering your dog some mental stimulation.  As long as it is safe and humane, it doesn’t matter what the high energy exercise is, just that it is something that works your dog until he is tired.  Be careful when exercising your dog and always provide water to the dog, especially if the weather is hot. Watch out for your dog’s paws in the winter as they get ice balls in them.  Boots will prevent the paws from winter problems as well as when the sidewalk is hot and will burn the dog’s paws.

A Catahoula running in the snow.  These dogs love exercising outdoors. Photo Courtesy of Shannon Nachajko.

This means you should feel all over your dog each day to detect health problems.  Weekly brushing will keep the dog hair under control. Ever month or two, you should bathe your dog.  You do not have to send him to a groomer or worry about matts in the fur. However, Catahoula toenails grow very quickly.  You should clip or grind them each week when you brush the dog.

They gain weight easily.  You may have to give him a weight loss food to keep him from getting too fat.  Do so only on the advice of a veterinarian as some health conditions cause a dog to look fat but really mean the dog needs treatment.  Once the dog is cleared by the veterinarian, make sure to give him that high energy exercises every day to help your dog keep his shape.

As I said in the introduction, Catahoula Leopard Dogs are not for everyone.  If you are an experienced dog person, like to train your dog, and are comfortable running a “pay to play” system in your house, you are blessed to be the type of person a Catahoula can love.

Catahoula Leopard Dogs are one of the more popular dog breeds. Photo Courtesy of Shannon Nachajko.