Here’s a familiar scenario:  you and your dog Fido walk into the backyard to check your garden, but your garden’s progress also impresses the neighborhood rabbit. There it sits, nibbling your lettuce. You point him out to Fido, hoping the dog will chase the freeloader away. The rabbit freezes as Fido looks left, then right, but the chase doesn’t begin until the nuisance makes a dash for weeds bordering your property. You shake your head, wondering how Fido didn’t see something so near.

Are Dogs Colorblind? (A Myth Debunked) 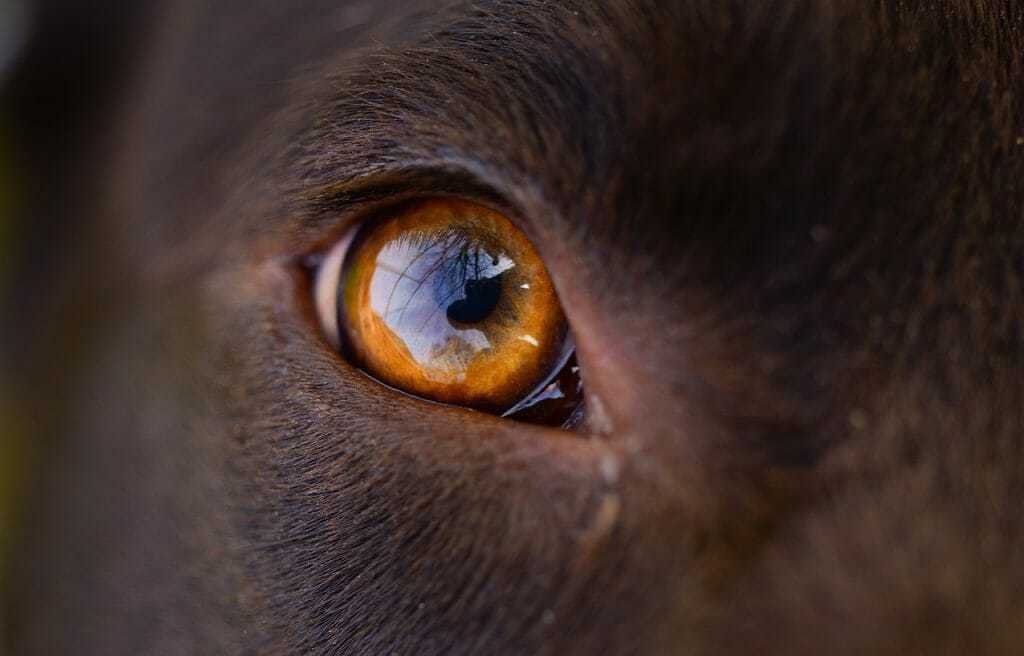 A close up of a dog’s eye

If you’re like me, you probably believe a popular 20th century myth:  that dogs see only in black and white. So why didn’t Fido see the rabbit? Even with a gray-toned vision, there should have been enough contrast between a light brown rabbit and the dark green of the grass. But a 2012 study by University of Washington scientist, Jay Neitz, and later research at the Russian Academy of Sciences proved that old theory was just a myth. A dog’s vision is similar to ours.

How Do You and Your Dog See Color?

But before you can understand how your dog sees, you need to know more about eyes in general, and it’s intricate stuff. According to the American Optometric Association, there’s a give-and-take relationship between several parts of the eye. Here’s what I know:

Human eyes have three cones giving us the ability to see variations of red, green, blue, and yellow. Three variations for color vision is known as Trichromacy. Neitz discovered dog’s eyes have cones too. In fact, they have two cones to our three.

Now don’t forget the role of cones—to see color, and if dogs have cones, they see color. Two color variation is Dichromacy, and shades of black and white is Monochromacy. Scientists agree that dogs see similar to a color-blind human because they can’t distinguish between red or green, and dogs differentiate between colors based on brightness. So, if you had on a bright red shirt, Fido can see that you are wearing a shirt, and it might even look yellow to him.

Undeniable proof came after Russian researchers placed food bowls inside locked boxes. The only bowls containing raw meat had yellow paper placed in front of them. Tests concluded that dogs found the food inside these yellow boxes 70% of the time, indicating that even though dogs have lower color discrepancy than humans, they still base many of their decisions on color. Brighter colors win out every time. This explains why your dog Fido couldn’t see a rabbit in the yard, even from a few feet away. We see separate objects, but there is no discrepancy between the brown of the rabbit and the green of the grass.
Dogs even recognize other dogs on a television screen. The proof:  another 2013 study where dogs picked out other dogs just from visual cues. The entertainment industry has used this fact as a marketing strategy. You can subscribe to a special HGTV channel just for dogs, DogTV. A San Francisco group of dog lovers founded the channel in 2009 for dogs suffering from separation anxiety. According to the website, programs are “scientific” in nature, revolving around those things dog enjoy seeing and hearing. Some focus on relaxation, and some stimulation. Other programs help acclimate your dog to sights and sounds that frighten him.
However, the age and condition of the television set matters. Older TVs generate pictures frames slower. Since a dog’s vision response is quicker than humans, programs viewed on older TVs would resemble grainy silent films from the 1920’s. 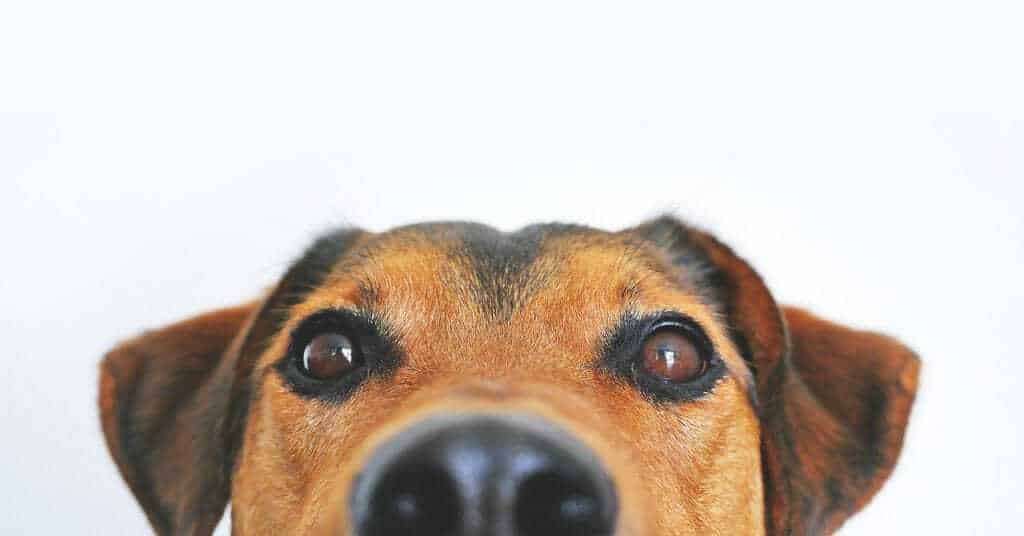 How Good is A Dog’s Vision When Compared to Humans?

However, although dogs see color, according to the American Kennel Club, everything they do see is blurry. The measurement is about 20/75 (US), or 20/64 (other countries), or what a human sees at 75 feet, a dog sees at 20 feet,  But don’t feel too bad for them. Remember those rods and cones I talked about earlier? Dogs may have fewer cones than humans, but they have more rods. This means they react faster to movement than we do (they see things about 25% faster than us), and why your dog Fido almost caught up to the rabbit, even after a late start

You can find more examples of what your dog sees at a website called Dog Vision. Here you can upload a photo, then manipulate it so you see what your dog would see. 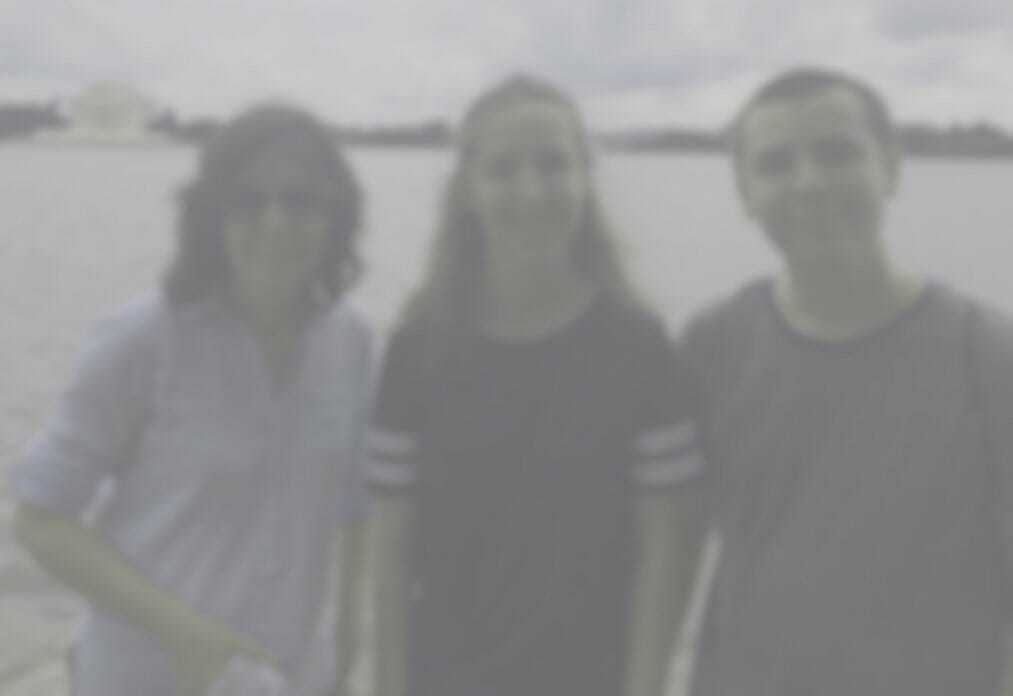 A photo of myself and my kids uploaded to Dog Vision.

I uploaded this photo so I could understand our dog’s vision a bit better. I am on the far left, and the actual color of my shirt is a light blue and white stripe. As you can see, our dog wouldn’t be able to detect the stripes since the shade is quite dull. My daughter’s shirt is pretty clear, but it is also the closet to its natural color. (Her shirt is dark gray with white stripes.) My son’s gray shirt is also close to the original, and you can see the blue outlining the collar, although our dog would see violet instead of blue.

Can Your Dog See in the Dark? 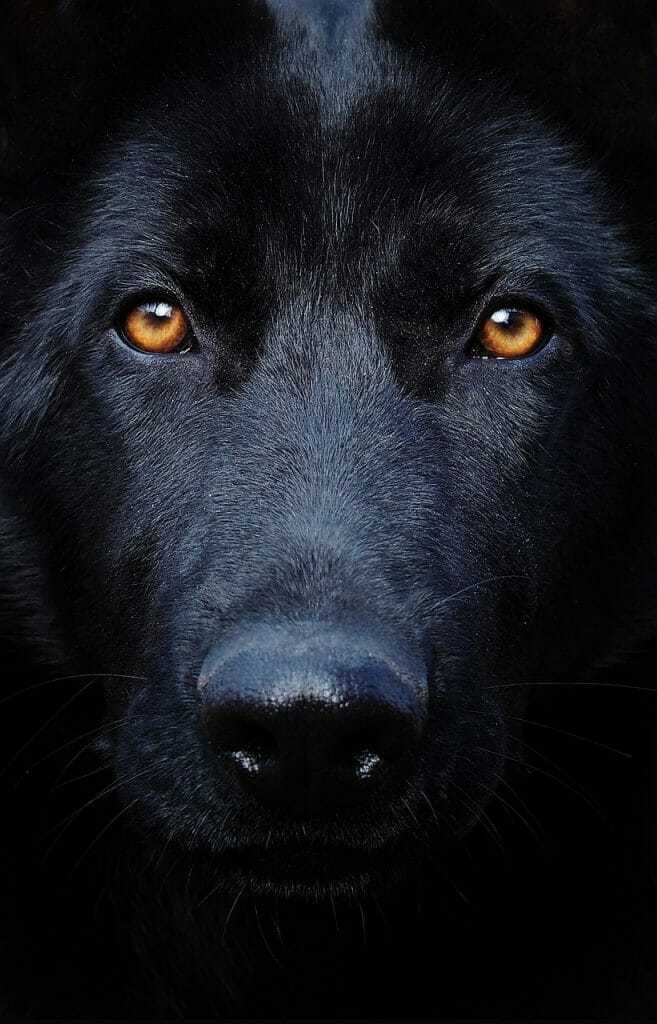 A black German Shephard in the dark

But how much better is a dog’s vision under dim conditions? We may bump a toe getting out of bed, but does our dog walk around the house seeing what we might see wearing infrared goggles? Not exactly. Dogs have something else in their eyes that humans don’t:   tapetum lucidum, or a mirror in the back of their eye. So, as light comes in, it’s reflected back out. This process continues, helping dogs recognize what is around them in the dark. They see about five times better than we do in dim light, and that’s a lot. This, along with an increased rod count, is also why a dog’s eyes have that weird glow with flash photography, and why their eyes shine in the dark. And don’t forget—dog’s eyes are towards the sides of their head, giving them much better peripheral vision (240 degrees to our 180).

Will Your Dog’s Color Vision Affect Play and Training?

How your dog sees color should affect all interactions with your dog, whether playtime or training, and it should, especially when many toys and training tools seem to be red or orange. Why would you want to increase your dog’s frustration in activities that are supposed to be enjoyable for you both? Understanding your dog’s visual limitations will might even strengthen the connection you two have.

The dumbbells I used when training our husky for his CD certificate were white, a stark contrast to the green grass, and much easier for him to see. And for play, choose light blue or yellow toys because these colors are easier for your dog to detect. 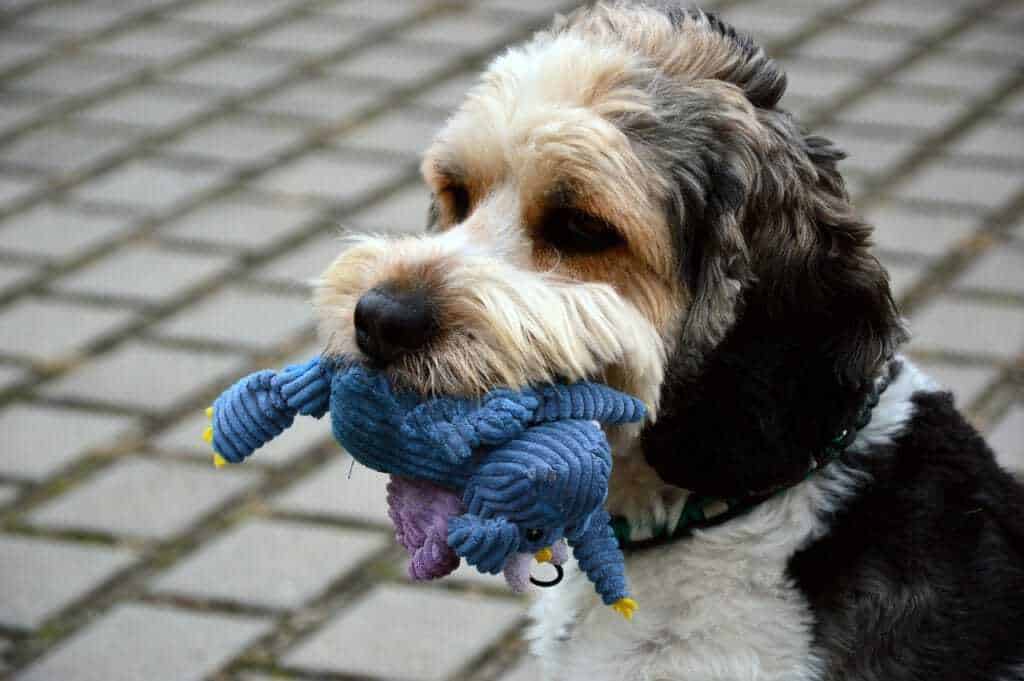 A dog plays with a blue toy.

So, the next time you find yourself shaking your head at what your dog Fido doesn’t see, find a yellow ball and play a game of fetch instead. 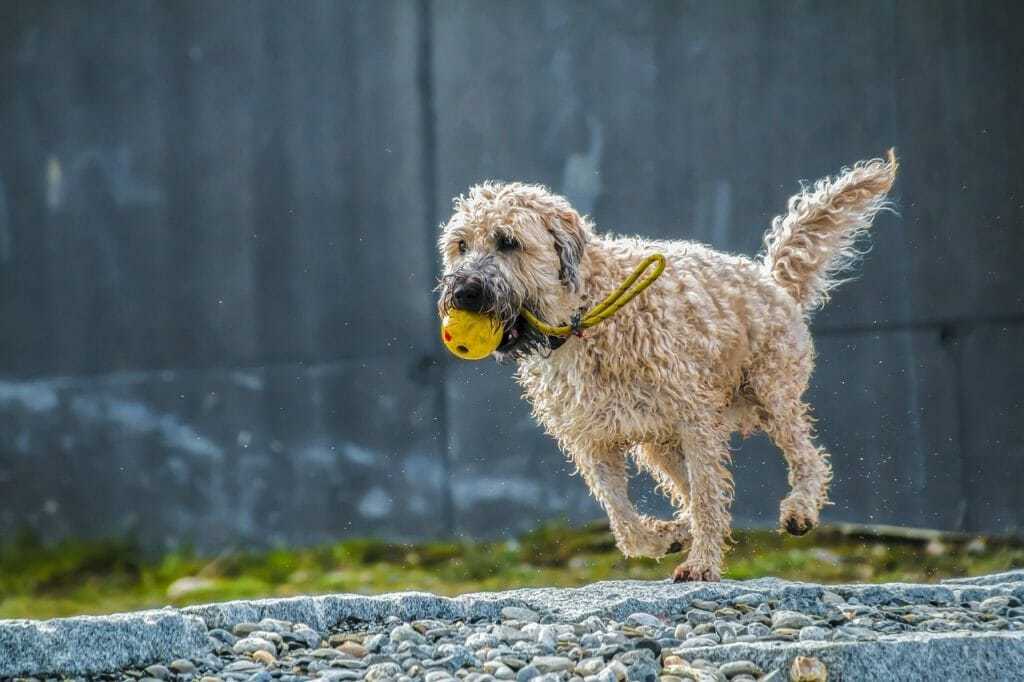 Dog playing with a ball in a color he sees very well-yellow. 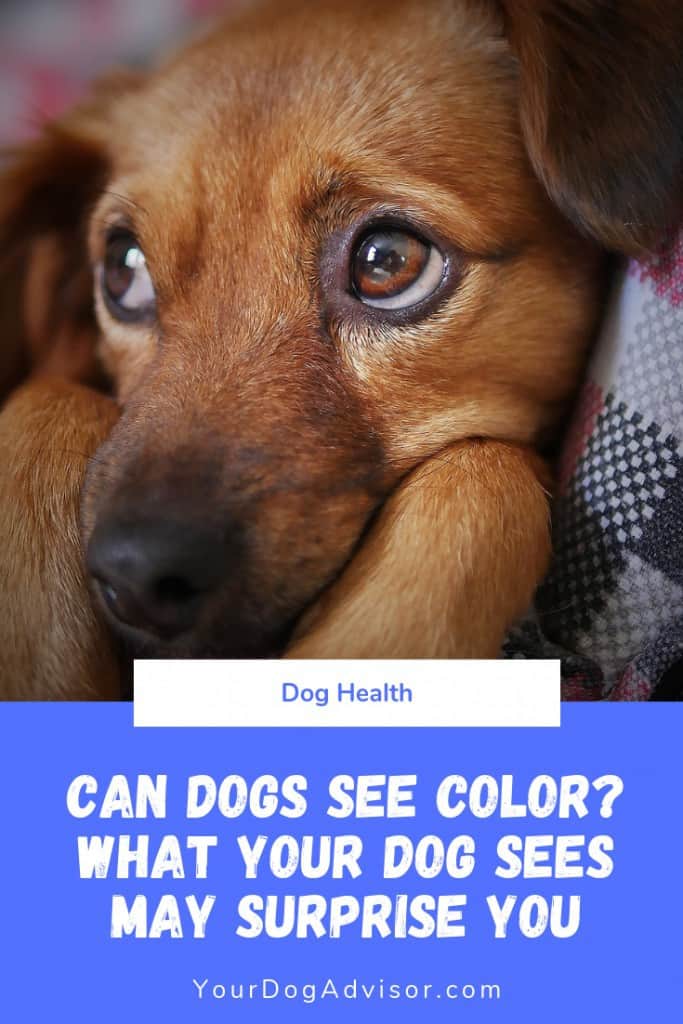