With their distinctive black coat and brown markings, not to mention their imposing size, Rottweilers are one of today’s most recognizable dog breeds.

It’s also a breed, however, that has been judged for its size and strength, and also mistakenly pigeonholed as an overly aggressive breed prone to attacking people.

The reality is that Rotties can be gentle, loving pets as long as their owners take the time to nurture, train, and consistently discipline them. The dog’s temperament depends a great deal on how much attention and care its owner gives it.

Here are 14 things you’ll want to know about Rottweilers before welcoming one into your family.

This large dog is one of the most popular breeds in the AKC.

There are 193 breeds of dog registered with the American Kennel Club. Rottweilers currently rank as the eighth most popular breed. And that’s not the only impressive statistic that the breed boasts. These are big dogs: males measure 24-27” tall and weigh up to 125 pounds, while females measure 22-25” tall and weigh up to 95 pounds. Their life expectancy is 9-10 years, which is on par with other large dogs like Great Danes or Boxers. Their coats are always black with rust, brown, or mahogany markings, so they are easily recognizable. This Rottweiler is ten years old, so he is an older member of the breed. His coloring is still impressive with the brown markings clearly delineated.

Training is key to enjoying your Rottweiler.

This breed is very smart, but can also be very stubborn. As the owner, you’ll need to establish your alpha status with the dog as soon as you bring it into your home. The key, as it is with most dogs, is starting early and having very consistent discipline. With this breed, however, it’s especially important to train them really well because of its size and because of some of its territorial instincts. It’s a member of the working group, so it will want to please you, but you’ll have to work hard to overcome its occasional stubbornness.

Due to their “size, strength, and protectiveness,” the American Rottweiler Club stresses that owning this kind of dog is not meant for everyone. The breed requires time and commitment, especially over the first years of the dog’s life, to adequately train it to behave correctly. Also because of the size of a grown Rottweiler, potential owners should take into consideration how much food the dog will consume and plan to spend that money to feed it. An adult Rottie can consume between 5-10 pounds of dry dog food per week. Braumo was adopted at eight weeks old and was trained by his owners to be gentle and follow commands. Here he is sitting in anticipation of receiving a treat after fetching a ball.

They have a long and interesting history.

The Rottweilers we know today are cousins of Asian Mastiffs. They were bred to guard hers of food for Roman soldiers who were serving in the Roman Empire. When the Empire fell, many of the breed found homes in Rottweil, Germany, and continued to guard herds of animals there. It’s also how they got their name. The breed has changed very little physically since then.

Since they’ve been in the United States, they have been helper dogs.

When herds began to be transported via cattle cars in the 1800s, Rottweilers were no longer needed and almost became extinct. Then they found a new purpose as service dogs for police officers, guide dogs for the blind, and personal guard dogs for anyone who needed extra protection. They eventually began to be imported to the United States and became AKC official in 1931. They served as search and rescue dogs for both the Oklahoma City Bombing and the World Trade Center collapse. And while they have never won Best in Show, they have won a Fund ACE Award in 2015 for their work as therapy dogs.

Back when Rottweilers were first bred, their tails were always docked because they were guarding herd and it wasn’t worth the risk of the tail being trampled on while they were working. However, times have changed, as have thoughts on tail docking.

The official tail-docking policy of the American Veterinary Medical Association is that they are opposed to doing it for cosmetic purposes, and encourage breeds to eliminate that physical requirement from their breed standards. That means that while the practice of docking is very much discouraged, it’s not illegal. Rotties have not removed tail docking from their official breed standard, so tails are still routinely docked from puppies. It should be noted, however, that you can purchase puppies whose tails have not been docked from breeders on the AKC Puppyfinder site. 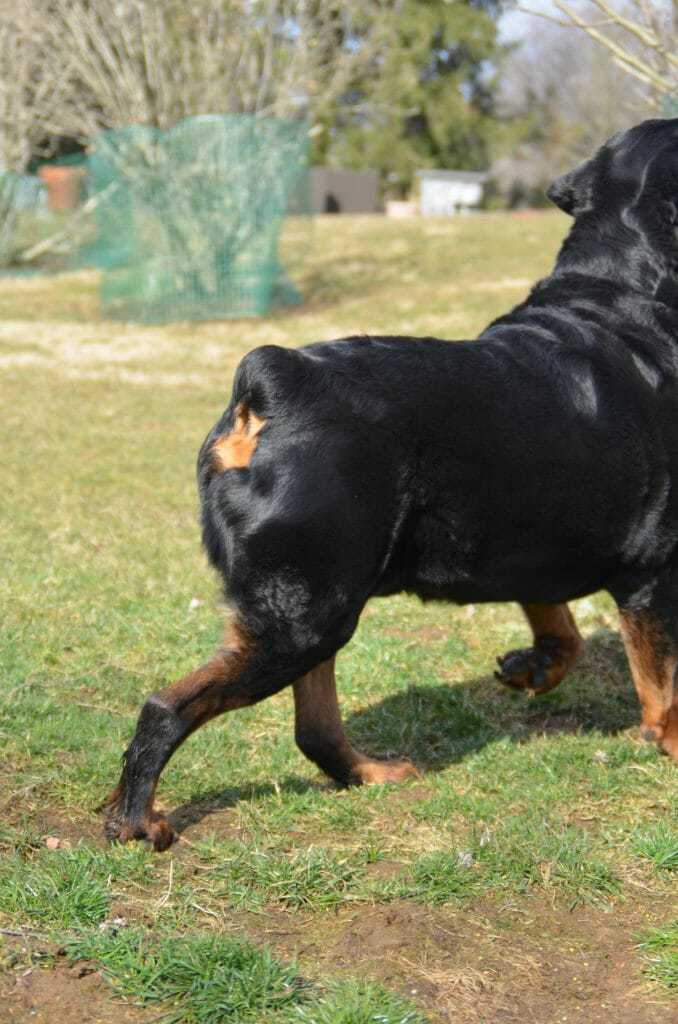 This Rottie had his tail docked before he was adopted by his owner, which happened when he was eight weeks old. So he has been without a tail virtually his entire life.

There is a range of temperaments in the Rottweiler breed.

This statement is true of virtually every dog breed, but people who want to own Rotties should pay particular attention to a dog’s temperament before adopting it. If a puppy is too hyper or too shy, too excitable or too nervous, you should probably pass and look for one that is calmer and more affectionate. Because roughhousing can get a dog worked up and possibly encourage aggression, you should not do it with your dog, at least until the dog is well trained.

This loyal dog will be your family’s biggest protector.

Rottweilers are large and intimidating, but they can be fiercely loyal and very protective of your family. This is a big breed and they have a big bark, and while he may not use it as often as other breeds, it can still be frightening to hear. This dog will be friendly and loving with your family and people who are often at your house, but may act protective of you as the owner around people that it doesn’t know. While being a watchdog isn’t an innate skill, being protective of his property is, so members of this breed will often protect out of loyalty and territorialism. You as an owner should be educated on this breed characteristic and help visitors to your home understand it as well. 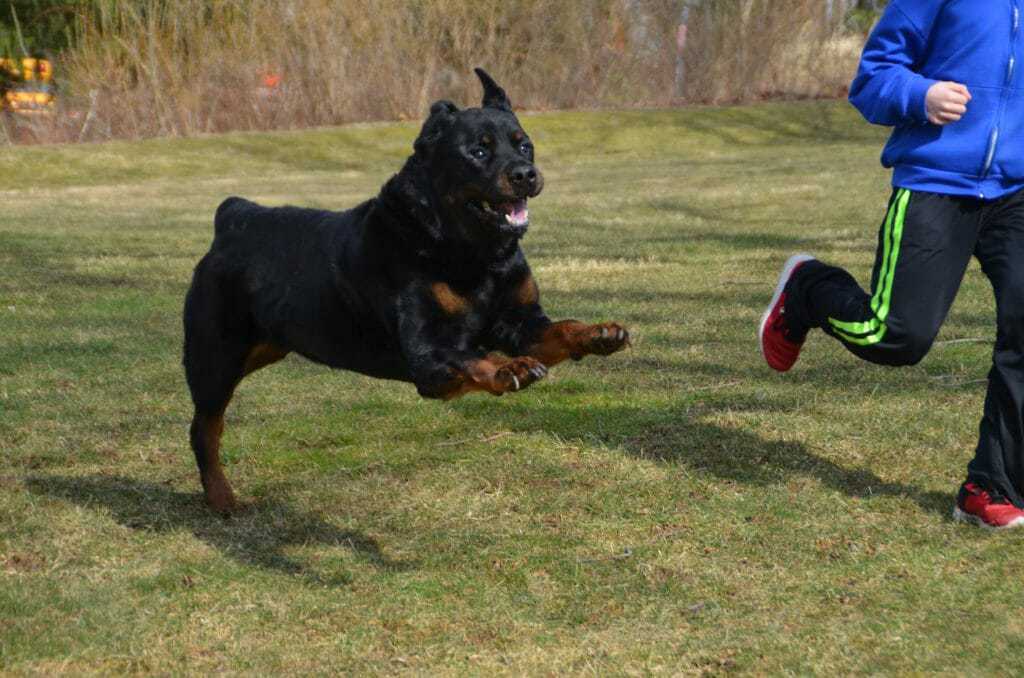 The breed is loyal to its owners and its owners’ friends and family. This Rottie is running with someone he had never met before, so the owner stood near while the boy and the dog met and started to play together. They were happy chasing each other all over the yard after that.

Kids and Rotties get along, but they should be supervised when they’re together.

These dogs are often called gentle giants and families with small children are not forbidden from adopting the breed. However, because of their territorialism and sheer size, there is a possibility that they would react physically when they perceive a threat. Kids should be taught to respect the dog and always be supervised when with the dog.

Their jaws are stronger than any other dog breed.

Rottweilers have a bite force of 328 pounds. That’s the strongest of any breed, even including notoriously strong biters like Pit Bulls or German Shepherds. And for even more perspective, that force is half of what a shark’s bite force is (669 pounds). Obviously, a bite like that can cause significant injury, making the need to train even more pressing. 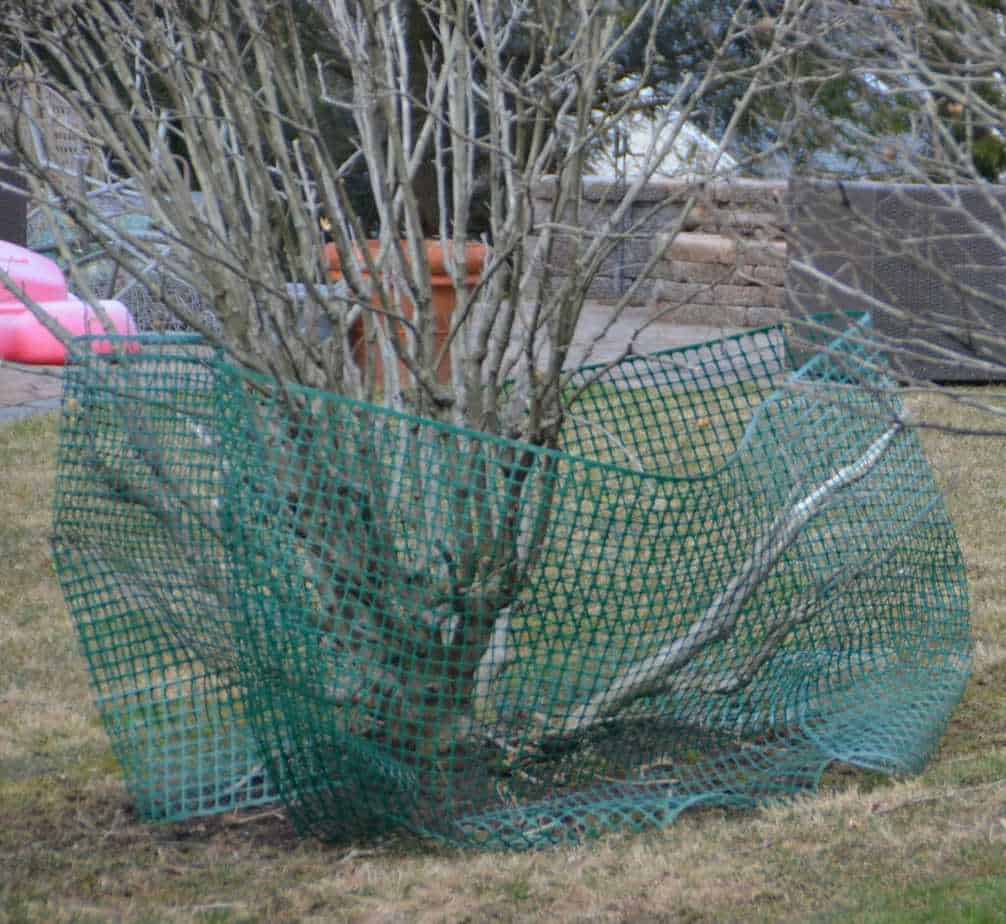 This picture is a plant in Rottweiler Braumo’s backyard. The branch on the right side that’s bending close to the ground is broken off because according to his owners, he decided to use it as a chew toy. Now all of the bushes like this one are fenced off so the dog can’t break off any other limbs.

Their black coat and tendency to overeat are two health risks.

We already mentioned how much they can eat, so it’s worth noting that you need to observe your Rottie as it eats to make sure that it doesn’t become obese. This breed should also be watched when it spends time in the sun. Its trademark sleek black coat is stunning, but can also allow the dog to easily overheat, potentially causing heat stroke. In addition to those two things, Rottweiler standards also call for breeders to do hip, elbow, eye, and heart evaluations on any dog they’re breeding to prevent any genetic problems with these parts or organs from passing on to future generations.

Apartments are not ideal for this breed.

While an apartment can potentially be an okay home for this dog if the space is large enough and you are committed to walking the dog several times a day, it’s far from ideal. This is a breed that needs its exercise, and fares best in a home with a fenced-in yard (with a high fence so it can’t escape!) so it can run and exercise daily.

An eleven-year-old boy and a ten-year-old Rottweiler race each other across the yard. A Rottie needs a chance to run and exercise every day, and a large yard gives them that chance.

They have a double coat that sheds.

Like many breeds, this one sheds heavily in the fall and spring seasons. It has a double coat consisting of a coarse, long outer layer and a softer, shorter undercoat. It doesn’t need the services of a professional groomer, and will do just fine with occasional brushings and baths at home.

Rottweilers are a favorite breed of celebrities and even have a children’s book starring one of their own.

Famous people that have owned Rotties include Will Smith, Leonardo DiCaprio, and Bruno Mars. The breed even stars in its own children’ book series called “Good Dog Carl” by Alexandra Day. It was first published in the 1990s, and there are 12 books in the series that follows Carl the Rottweiler around on his adventures.

While even devoted owners of this breed will acknowledge that it’s not the best choice for everyone, its intelligence, loyalty, and desire to protect its owners have made it a highly desired dog. With commitment and care, it might be the right one for you too.

Seresto Flea and Tick Collar for Dogs, 8-Month Tick and Flea...
Buy on Amazon
Bestseller No. 4 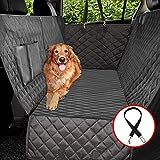 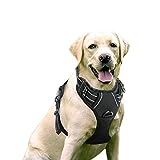